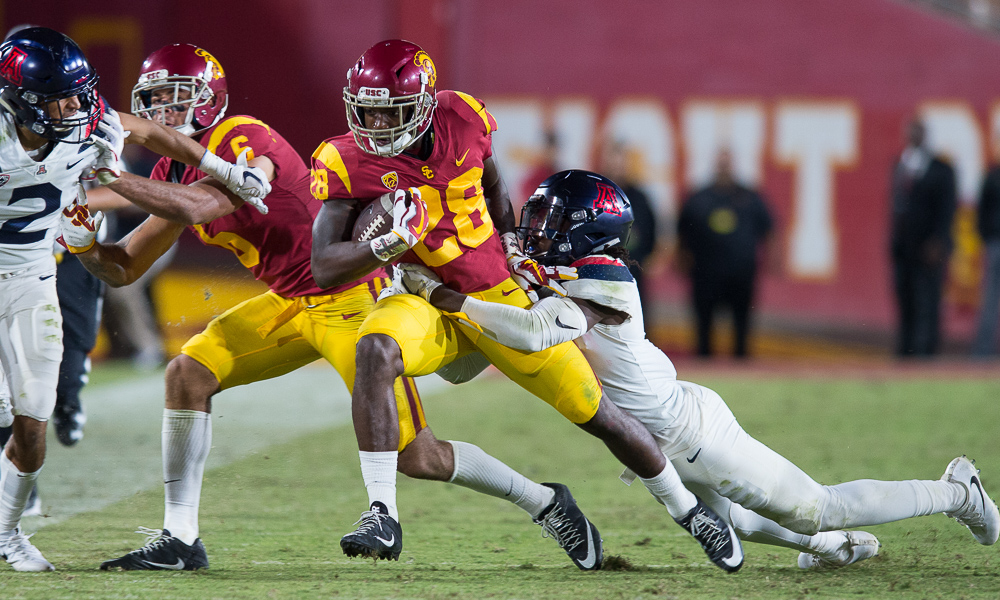 The bottom line: After Saturday’s controlled situation scrimmage, head coach Clay Helton, Mr. Glass-half-full, did his best not to erode the confidence of his competing quarterbacks Matt Fink and Jack Sears. Unfortunately, neither quarterback had the type of outing that encouraged confidence in the Trojans’ 2018 offense, and if you know Clay Helton, you can read between the lines when he said, “I reserve the right to watch the tape before I give an official evaluation, but my gut says we weren’t very good.” Not a good sign in Saturday’s verbal evaluation, especially when the coach later added “we need to progress our quarterbacks as fast as humanly possible.” This a far cry from his comments a week earlier when he might have fudged a bit in saying positive things about his inexperienced and inconsistent quarterbacks.

Who knew: When questioned about incoming freshman quarterback JT Daniels, who was in attendance along with heralded incoming wide receiver Amon-Ra St. Brown, Clay Helton said, “He (Daniels) can get on our server to watch film from practice, and he can access our signal tape so he can see the signals and begin to work those calls in his mind.” Wow, that’s actually quite a revelation on getting JT ready to compete in August, and don’t think for a moment that Daniels isn’t sucking it all in by taking full advantage of watching practice film and don’t think that Helton isn’t politely chewing his gum faster in anticipation of what JT can do when he arrives.

On the positive other hand: After Saturday morning’s scrimmage, senior tailback Aca’Cedric Ware (photo above) served notice that he could be a major contributor in 2018. “Ced” showcased his improving game and what he has been working on during spring ball. Many observers thought that Ware was the best performer on Saturday. On the bright side, isn’t USC supposed to be Tailback U.?

Getting a chance: With the departure of tailback Ronald Jones ll and the early hamstring issue by Vavae Malepeai, it gave senior Aca’Cedric Ware a chance to show his stuff. Asked about his running style, “Ced” said, “I am a physical runner, but I can also break away. I have the physicality and the skill set, and once I get past the first level, I can make the second level miss and take it to the crib.”

Getting a chance – Part 2: Asked what he’s been working on this spring, Ware said, “My feet. My ability to make people miss in the open field. I am trying to emphasize that a lot more. I am still emphasizing my physicality and still choosing to do the right thing that when to run somebody over or make them miss. The big emphasis is my footwork and make people miss.”

Making an impression: Aca’Cedric’s performance on Saturday drew the praise of head coach Clay Helton who remarked afterward, “Ced was really bringing the physicality today in the downhill run game.”

The comparison: Earlier in the week, new running backs coach Tim Drevno was quite complimentary when talking about Aca’Cedric Ware, all of which made Saturday all the more sweeter. Drevno said, “He’s a real tough physical runner and does a good job. He can really go downhill and lower his pads. He’s got great vision. One of the better ones I’ve been around in terms of his physicality, his leg drive. That’s a big back, that’s a big guy coming down hill who does a good job of trying to get four or five yards. He does a good job of making things happen, let the play express itself, let the linemen block, and drags guys to move the chains. He reminds me of a Buck Allen. He’s got a good feel and he’s smart and savvy. He’s bigger than Buck and it’s exciting.”

The philosophy: Asked about his style handling of running backs, Tim Drevno said, “My philosophy on it is that I think a running back doesn’t need to carry the ball 32 times a game. I think if you carry him 18 or 19 times or 16 or whatever that magic number is, that helps in the National Football League, and keeps guys fresh and takes hits off of them. They can have great careers as they get to the next level. The bottom line to spread the wealth for us to be successful here at USC.”

Continuing the upstart: Once again, the defense pretty much had its way on Saturday, and true freshman Talanoa Hufanga again showed he is the real deal with an interception and pass breakup. Obviously, the defense as a whole is way ahead of the offense, which is a good sign, but if the offense isn’t consistent or potent, how much can one measure how good the defense is? Call it the Ohio State hangover.

The revelation: In analyzing his newfound depth in the secondary, secondary coach Ronnie Bradford made a very interesting statement. The coach said, “I can monitor my guys and know when they need to come out, it’s not always my decision but we have those options now.” What caught our eye was “not always my decision but have options now.” I assume that mean he is overruled by DC Clancy Pendergast or head coach Clay Helton, which is not unusual at all in any program.

Leap frog: With his backups looking ready to make a move, corner Jack Jones (out with academic issues) will have his work cut out for him when he returns to the team in August. With DB coach Ronnie Bradford saying on the record that challengers like Greg Johnson, Isaiah Langley, and even mention of young Chase Williams are making plays, the bottom line for Jack Jones is that he will have plenty of competition on his hands, and he’d better be ready to go upon his return.

Laser focused: No question that this is the final shot for senior CB Iman Marshall to finally live up to all the hype coming out of Long Beach Poly High School. Marshall understands the importance of his senior season, and that’s a good thing, a sense of urgency. Thus far, “Biggie” has taken the challenge and appears to be having a very good spring.

Lockett up: One of the feel-good stories of spring practice has been the return of redshirt senior Jonathan Lockett, the former Mater Dei star. The word for Lockett is “competitor.” And by the way, Jonathan had an interception during Saturday’s scrimmage.

The clinic:  Clay Helton held the Trojans’ annual coaches’ clinic on campus this weekend, and two of the main guest speakers were Stanford head coach David Shaw, who was 0-2 last season against the Trojans, and Fresno State coach Jeff Tedford, whose Bulldogs team will be the first opponent in 2019 when the Trojans open the renovated United Airlines Coliseum.

Youth is served: Clay Helton is quite effusive in his praise of first-year quarterback coach Bryan Ellis. Helton said, “There’s no question in my mind about him after watching his mind and creativity at work. Being young doesn’t mean you aren’t good, ask Sean McVay about that.” A good point by Helton, however, it’s safe to say that Ellis will be held to that quote as the season progresses or should we say how the Trojan quarterbacks progress throughout the 2018 campaign.

Mr. Versatility: There’s nothing like having a player that can play a multitude of positions and be adept at all of them. Defensive coordinator Clancy Pendergast is fortunate to have such a player in redshirt junior Christian Rector (6-4, 275). Rector, who subbed for Porter Gustin when Porter was sidelined for much of last season with a broken toe and biceps tear, was very productive in Gustin’s “predator” position, and now with Porter back, Christian seems like he’s lining up everywhere but the secondary and at nose tackle.

The hidden gem: It may not be immediate but look for redshirt freshman offensive lineman Jalen McKenzie (6-5, 305) to make his mark on the offensive line in the future. Asked about his famous NFL father, Reggie McKenzie, Jalen, who says he’s a combination bulldozer and technician but more of a bulldozer, said, “He (dad) really didn’t really teach me technique with the football thing, but he taught me if you come out here and give it your all each and every day, everything is going to come after that and no shortcuts. He gave me the mental approach. He really didn’t give me stuff like a coach. He instilled a work ethic in me.”

Trading cards: Former Trojan quarterback Cody Kessler was traded last week to the Jacksonville Jaguars for a conditional seventh-round pick in the 2019 draft pick. Say what you want about Cody’s NFL career, but like Matt Barkley he continues to draw a big paycheck and a wealthy NFL retirement pension on the future horizon.

The gift of gifts: At the memorial for the recent passing of Trojans All-America receiver Hal Bedsole, long time best friend Brian Kennedy, a perennial key cog of booster support for the Trojans football program, was given a USC sweater worn by Bedsole. Kennedy’s devotion to his celebrated friend was certainly deserving of such a cherished gift and nobody could appreciate more than Brian.