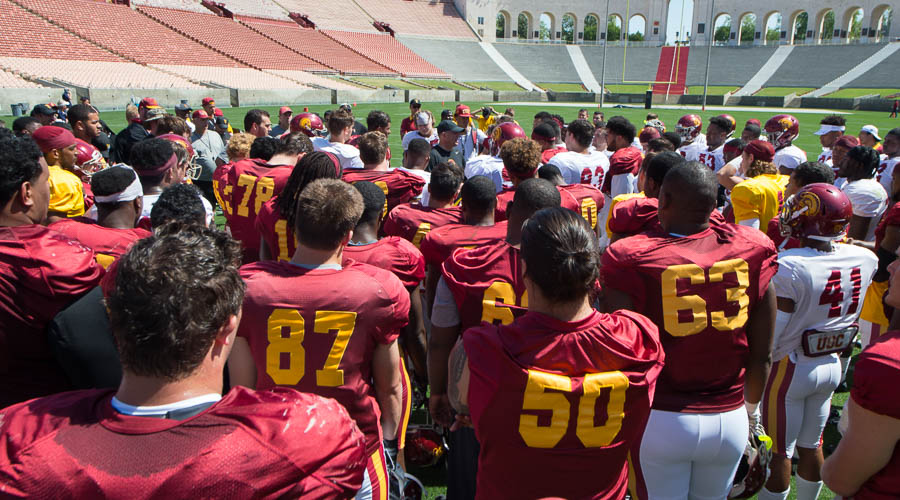 Spring Game protests: Many Trojans fans and fellow colleagues in the media weren’t too thrilled with the “situational format” of last Saturday afternoon’s Trojans Spring Game in the Coliseum, which was basically a glorified practice. Yes, it would have been far more entertaining for football fans and the media to watch 75 minutes of full contact, game-like action. But honestly, do you really think that the spring game will be remembered as the reason the Trojans win or lose to Alabama or are successful or a failure next season? Of course not.

Spring Game protests – Part 2: Yes, watching the Ohio State and Alabama spring games, which were basically game-like from football format to mindboggling attendance to pregame protocol to the overall atmosphere was truly impressive. That being said, no spring game format for the Trojans can simulate the atmosphere, spectacle, and media attention that will be on display the night of Sept. 3 in Dallas when the Trojans open the 2016 season taking on the defending national champion Crimson Tide.

Spring Game protests – Part 3: And, of course, if one of USC’s main cogs like tailback Justin Davis or yet another defensive linemen went down in the Trojans Spring Game, there would have been a groundswell of anger of why Clay Helton risked injury on a meaningless spring game just to appease television viewers and the fan base. After all, what more could Helton and his staff learn that they didn’t know from the previous 14 practices?

A fall spring game: If Clay Helton really wants to simulate a real game leading into Alabama, he could do what Pete Carroll did one summer training season. You might recall that Carroll smartly had a simulated game a couple of weeks before the season started – before the general public and in the Coliseum. It drew a big turnout and the “scrimmage” had the Trojans Marching Band, song and cheerleaders, officials, and a true game-like atmosphere. If you’re going to scrimmage anyway during training camp, why not give it a regular season feel? I know, the Alabama coaching staff will watch it and that will give the Crimson Tide a huge advantage. Listen, if the defending champs need a Trojans public scrimmage in the fall to defeat the Men of Troy, they weren’t going to win anyway.

The comparison game: If you were dissatisfied with the excitement and action of the USC Spring Game, Saturday morning’s UCLA Spring Game made the Trojans Spring Game look like the 2005 BCS Orange Bowl victory over Oklahoma. You talk about boring; man, that UCLA Spring Game was brutal. If not for the informative chatter of Pac-12 Network hosts Jim Watson and Glenn Walker, it could have become a NyQuil moment if it wasn’t anyway.

Proof positive: New Trojans athletic director Lynn Swann is living proof that if you’re good enough, you can stand out in a run-oriented offense like the Trojans under John McKay. Although the Trojans were known as Tailback U., wide receiver Swann certainly did enough damage and impressed the scouts enough to be taken as the 21st pick in the first round of the 1974 NFL draft by the Pittsburgh Steelers.

Trivia: Lynn Swann was a first round draft pick in 1974. What other Trojans was also a first rounder in the 1974 draft? The answer appears below.

NFL draft thought: So just where and when will Trojans linebacker Su’a Cravens be taken in this week’s NFL draft. I would guess that Cravens will be silently rooting for the Rams so he could stay local and continue his play in the Coliseum.

NFL draft thought – Part 2: I think the most intriguing potential Trojans draft pick is corner Kevon Seymour, who had a rocky senior season, which may or may not have been of his own making. Seymour could be a major surprise based upon his NFL workouts. It’s not like he doesn’t have the talent or speed to succeed at the next level.

NFL draft thought – Part 3: Of course, we’re all also waiting to see whether another potential Trojans draft pick, fullback and special teams terror Soma Vainuku, is selected and by whom. The same could be true of star-crossed tailback Tre Madden.

To the Max: Most of the Trojan talk in these parts concern quarterback Max Browne, but in this week’s NFL draft, another Trojans Max, center Max Tuerk, hopes to hear his name called on the NFL draft podium. Because of the way his USC career ended with knee surgery and the fact he didn’t work out for NFL scouts in Indianapolis because of his rehab, he’s become an unintentional afterthought. However, it won’t be a shock to hear Tuerk’s name called at some point.

The connection: The Rams recently secured the No. 1 pick in the NFL draft and figure to select a quarterback, either Cal’s Jared Goff or North Dakota State’s Carson Wentz. There is a USC connection, as both signal callers are represented by Bruce Tollner, son of former Trojans head coach Ted Tollner.

Elevating experience: In case you somehow missed it and haven’t read about it on ESPN or other media outlets, eight Trojans offensive linemen going out to dinner recently in Redondo Beach got stuck in the same elevator. Apparently the elevator could handle only so much weight, which included mammoth 6-foot-9, 360-pound All-Pac-12 tackle Zach Banner.

Elevating experience – Part 2: The weight limit for the elevator was 2,500 pounds, and it was estimated that the weight limit was surpassed by at least 700 pounds. According to sophomore offensive tackle Jordan Austin, “We were on the fifth floor and got stuck in between the fourth and fifth floors. We didn’t make it very far.” Shocking.

Elevating experience – Part 3: Well, Zach Banner started tweeting videoing the whole elevator saga to ESPN. It was estimated that the whole experience, from elevator stoppage to firefighter freedom, lasted about an hour. The heat and humidity inside the elevator became almost unbearable, but the players kept a humorous and positive outlook by doing some recorded, improvised rap as firefighters tried to free them.

Elevating experience – Part 3: Talk about a new way of off-season conditioning, the Trojans O-line better hope that coach Neil Callaway, who was meeting his linemen for the Redondo Bach dinner, doesn’t incorporate this elevator episode into regimen of molding hardnosed, physical linemen. Callaway should know all about heat and humidity, having grown up in Macon, Georgia.

Elevating experience – Part 4: If the Trojans are having a difficult time moving the ball on the ground against Alabama’s vaunted defense, Clay Helton could say at halftime, “Is this Alabama defense more smothering and debilitating than being trapped inside that hot and humid elevator back in April?”

The Bish: Leave it to WeAreSC crack Hall of Fame writer Steve Bisheff to put the Trojans eight offensive line – crammed and trapped – in an elevator into proper perspective. The venerable scribe remarked, “That wouldn’t have been a problem for the defensive line, considering its lack of depth.”

Chow time – Part 2: If Chow takes the Van Nuys position, how long will it be before major college quarterbacks prospects transfers to Van Nuys to be mentored by Chow? And don’t think that some potential wide receiver transfers won’t be far behind.

Trivia answer: Offensive tackle Steve Riley in the first round with the 25th pick by the Minnesota Vikings. Riley and Swann were part of nine Trojans drafted in 1974.

Class act: According to those on the inside, USC Senior Associate Athletic Director Steve Lopes, who was a very serious and well qualified candidate for the USC athletic director’s position that went to Lynn Swann, has handled the whole process and transition with class and dignity. Lopes is considered very well liked and respected within the athletic department.

Inducted: On Friday, former two-time Trojans All-America offensive tackle Tony Boselli was inducted into the 2016 Cotton Bowl Hall of Fame for his effort in the 1995 Classic. The Trojans blew out Texas Tech, 55-14, and established records for total offense, passing yards, points in one quarter and points in one half. Boselli helped lead the USC offense to a whopping 578 total yards. Old No. 71 was inducted into the Hall of Fame at AT&T Stadium in Arlington where the 2016 Trojans will open the season against Alabama.

The changeup: Obviously the Trojans will play Alabama on Saturday night, Sept. 3, so television has moved the Notre Dame/Texas game to Sunday, Sept. 4, to create a blockbuster college football weekend.

Back to back: If you didn’t catch it on the WeAreSC message board recently, the Trojans and the Rams will play back-to-back on two separate weekends this season. The first weekend is Oct. 8&9 (USC vs Colorado/Rams vs Bills) and the second back-to-back weekend is Nov. 5&6 (USC/Oregon/Rams vs Carolina).

Back-to-back – Part 2: In the first weekend doubleheader, the Bill will bring in former Trojans standout wide receiver Robert Woods and the second weekend doubleheader will feature former All-American Trojans center Ryan Kalil. You can expect that both Woods and Kalil to be at the Coliseum during their respective weekends back in Los Angeles to root their alma mater on.

Early bird special: The Pac-12 has announced that its football media days will be July 14&15 at the Hollywood Loews Hotel. This is much earlier than previous seasons, and it the first time in recent memory that the festivities will not be held at a movie studio.

The last word: Ya think it won’t be the ultimate USC Trojans homecoming when the Los Angeles Rams host the Seattle Seahawks on Sunday, Sept. 18, in the Coliseum? With former Trojans corner and current Rams head coach Jeff Fisher battling wits with former Trojans head coach and Seahawks leader Pete Carroll, it should be quite a moment – not to mention that both clubs have former Trojans players and coaches. You have to wonder what scalpers’ tickets for that game will be selling for?