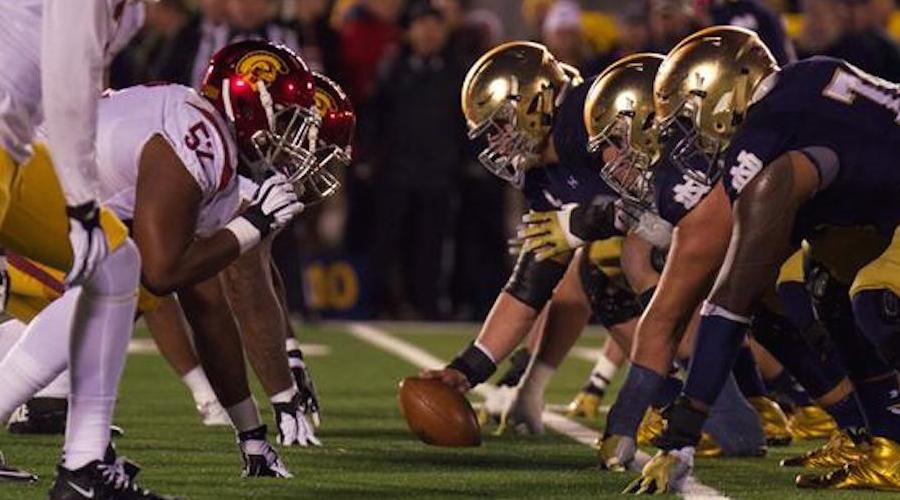 The evaluation: The difficult 41-31 loss to Notre Dame was not one for lack of effort but of execution and the inability to hold the Irish offense down in the final quarter, which resulted in scoring drives of 90 and 91 yards, respectively. Throw in a first quarter blocked punt for a touchdown and 10 penalties for 105 yards and there you have it. To a man for those that spoke afterward, the Trojans players agreed the loss was not one of effort but execution.

The evaluation – Part 2: Offensively, the Trojans had 590 total offensive yards compared to Notre Dame’s 476, so scoring and moving the ball wasn’t the issue. One of Cody Kessler’s two interceptions was just a great play by Notre Dame. The Trojans running game got untracked and produced 150 yards rushing. True freshman Ronald Jones ll again led the team in rushing with 74 yards and should be considered for even more playing time. Sophomore Justin Davis ran with great conviction (52 yds.) and showed toughness. And Adoree’ was Adoree’.

The evaluation – Part 3: As has been the case all season against quality opponents, the defensive just couldn’t get the job done consistently. After being a lightweight in the first quarter, the defense eventually tightened up in the second and third quarters. However, in the fourth quarter and when it counted, the defense wilted and the secondary play was atrocious with too many flags. Until the Trojans can stop somebody when it counts, the offense will continue to be under extreme duress to score over 30 points a game to win.

The evaluation – Part 4: The pattern remains the same – for the most part, big numbers for the offense and a paper tiger defense. On a positive defensive note, what might have gone unnoticed was that the Trojans were playing three freshmen at linebacker (Osa Masina, Cameron Smith, and Porter Gustin) for a good portion of the game and for the most part they looked very promising. It was the Trojans secondary, however, that couldn’t handle various one-on-one matchups with the Irish receivers that became a difference-maker.

The Trojans perspective: After the game and commenting on Notre Dame, Trojans interim head coach Clay Helton said, “Coming back to tie it at halftime (24-24) really felt like we had great momentum going into the second half. And then at the end of the day, mistakes hurt, whether it was penalties, special teams, some missed tackles, and some turnovers on offense.”

The Notre Dame perspective: After the game, Irish head coach Brian Kelly said, “In the second half, I’d say in the second quarter, being up two scores and then USC rallying back, I really liked our temperament as a football team. They didn’t show any kind of crack at all. They were confident. They believed that they were going to win.”

The game changer: With the Trojans up 31-24 heading into the fourth quarter, the Irish went on two scoring drives of 90 and 91 yards, respectively, and that was a crusher. Add an Irish 32-yard field goal with 2:32 remaining as gravy and that’s all she wrote.

Cody speaks: Afterward, Trojans quarterback Cody Kessler said, “It wasn’t about effort tonight, we just didn’t execute. I am very proud of our team, but we just didn’t finish. They made big plays and got the crowd back into it.”

Cody speaks – Part 2: Added Kessler, “Those turnovers late were crucial, especially when you play a good football team like that. Our guys dealt with so much this week, everything you could possibly think of. I am so proud of them. They put everything they had into this game.”

Tackling the issue: Leading tacklers for the Trojans against the Irish were linebackers Cameron Smith (11) and Su’a Cravens (10).

The frozen tundra: Temperature at kickoff was clear and 39 degrees and temperature in the second half dropped to 32 degrees.

The Mater Dei connection: Former Santa Ana (Calif.) Mater Dei linebacker Joe Schmidt, who is a main cog for the Irish defense, said afterward, “To get a victory like this over an incredibly talented USC team with so much firepower and so many reasons to fight right now, it feels so good to come out with a victory.”

Home cooking: Yes, those were Pac-12 officials working the game.

Getting to the point: Notre Dame’s 41 points scored were the most in the series by the Irish since a 49-14 victory over the Trojans in 1977.

More points: The 21 points by the Irish in the first quarter were the most points ever against USC by an Irish team in any quarter.

Quiet please: Emotions were also running high in the press box. More than a couple of times the press box public address announcer had to remind those in the large press box area to stop their cheering and emotional outbursts.

Keeping count: Notre Dame Stadium attendance from last night’s game against was announced as 80,795, a sellout.

Tough night: Both of the Trojans talented but young corners had difficult moments. Sophomore Adoree’ Jackson was burned on the first Irish scrimmage play by a 75-yard TD pass from DeShone Kizer to Will Fuller, and then in the final quarter Trojans true freshman corner Iman Marshall was victimized by junior receiver Cory Robinson – son of Hall of Fame basketball player David Robinson – on a spectacular 10-yard scoring reception just inside the end line.

Health scare: As you probably already know, Trojans athletic director Pat Haden felt lightheaded before the game and had to be taken into the locker room area for evaluation and was pronounced ok. Mid-way through the game, he left to go to a local hospital for further evaluation and was again listed as ok. He then directly left South Bend by private plane and returned to Los Angeles.

Health scare – Part 2: Seriously, perhaps this latest health scare for Pat Haden will allow him to better evaluate his future as the Trojans athletic director. The Trojans legendary quarterback has been under incredible stress the last several years due to the NCAA sanctions, coaching changes, and media scrutiny. Is it worth endangering his future and the remainder of his life while being a husband, father, and grandfather? If it were me, I would thank the university and know I did what they asked me to do and bow out gracefully. It’s a no-brainer to me.

Bowling for dollars: The All-State Sugar Bowl was scouting the game.

A record question: So what is the college football record for the number of times an assistant coach has been named the interim head coach at one school? Clay Helton has to be in the conversation.

Foreign exchange: The Pac-12 Conference and Letv Sports announced that as part of multi-year agreement, Letv Sports will stream Pac-12 regular season football games into China this season. They won’t be watching on direct TV, which still doesn’t carry the Pac-12 Neworks.

The last word: Well, next Saturday in the Coliseum the Trojans host undefeated Utah (6-0), and the timing couldn’t be more interesting with coaching rumors floating the Trojans might be interested in Utes head coach Kyle Whittingham.