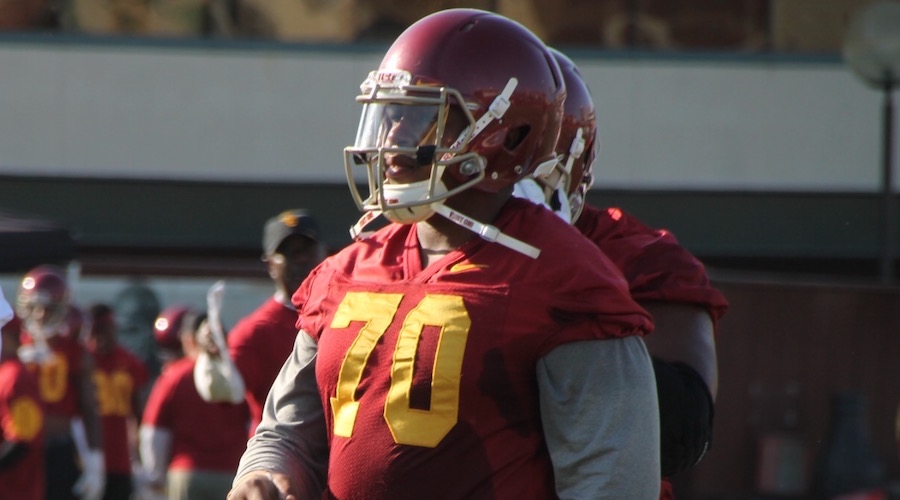 Play action: If the Trojans can assemble an offensive line in 2017 that opens some daylight for explosive  running back Ronald Jones ll, quarterback Sam Darnold will be nearly unstoppable in well-executed, play-action pass situations.

From the left: So, the general thought is that junior-to-be Chuma Edoga (photo above) will be given the first shot in spring ball to replace former All-Pac-12 left tackle Chad Wheeler. Expected challenger Toa Lobendahn is still rehabbing from knee surgery, and this figures to give Chuma a slight edge in future competition. No question about it, the experienced Edoga, once considered a prime recruit out of Georgia, will be getting his opportunity beginning in early March. Now let’s see what he does with it.

From the right: If Chuma Edoga locks up the left tackle spot by the end of spring, it figures that senior-to-be Toa Lobendahn will be the favorite to win the right tackle spot upon his return. Much depends on Lobendahn’s health and agility following another knee surgery. However, there will be no shortage of candidates at either tackle spot if you throw in youngsters like Clayton Johnston and Roy Hemsley, and let’s not forget versatile junior-to-be Chris Brown, who can fit in at either tackle or guard. In fact, it would be best to watch how the experienced Brown is positioned by O-line coach Neil Callaway as spring ball progresses. Unfortunately, redshirt freshman Nathan Smith would have been a legit competition candidate for the right tackle spot had he not gone down with knee surgery before the Rose Bowl.

Getting your kicks: More than a few are wondering if we have seen the last of Rose Bowl placekicking hero Matt Boermeester after his “Code of Conduct” issue removed him from the team. Normally you honestly don’t see too much attention paid to placekicking competition during spring practice; however, with Boermeester out indefinitely, more scrutiny figures to be focused on those with the best chance of replacing Boermeester, and it starts with reserve Michael Brown the freshman out of Temecula (Calif.) Linfield Christian. Assuming that Boermeester may not return, filling the experienced shoes of the 2017 Rose Bowl hero will be no easy task.

NFL dating: A number of departed Trojans are currently training for the NFL draft, which will be April 27-29. Speaking of dates, one draft site has the Dallas Cowboys taking Adoree’ Jackson in the first round.

The reality game: When I was young, I couldn’t figure out why in the NFL draft that an All-American was bypassed by a player from an unknown college. I finally came to realize that collegiate honors mean little to the NFL. If the pros don’t think you can play at the professional level, it’ll show up in the draft.

Daylight: Maybe it’s because spring practice is nearing, but it sure seems like it’s staying light longer. Of course, Daylight Savings Time (turn the clock ahead one hour) begins on Sunday, March 12.

The competition: Sure, the Washington Huskies are now a stronger factor in terms of recruiting challenges for the Trojans; however, if Clay Helton’s program lives up to expectation in 2017, history will prove out again that when the Men of Troy are winning, they’re an extremely hard team to defeat in the recruiting wars.

Unflappable: Much has been said how unchanged Trojans quarterback Sam Darnold has been since his resounding success on the field. As a current Heisman Trophy frontrunner, nobody seems to see a change in Sam. One of the reasons is that when he returns to his South Orange County San Clemente roots, he is shielded from the glare of the L.A. spotlight and can be just one of the beachcombers.

Brothers in fame: At the moment, I can’t think of two bigger, proven young Los Angeles sports stars than Trojans quarterback Sam Darnold and Dodgers shortstop Corey Seager. I guess you could also say the Angels All-Universe center fielder Mike Trout, but he doesn’t play in Los Angeles despite what Artie Moreno might say. Trout plays in Orange County (wink).

The motto: Don’t underestimate Clay Helton’s motto for his football program: Faith, Family, and Football. It’s a message that is resonating very well among football recruits and their families.

Where are they now: Former Trojans Butkus Award winning linebacker Chris Claiborne and former S/CB Marshall Jones are coaches at Calabasas High in the San Fernando Valley section of Los Angeles. And BTW, I still believe that Claiborne is the best middle linebacker in USC football history.

The pugilist: Former Trojans defensive lineman Gerald Washington fought on Saturday for the WBC Heavyweight Championship. Unfortunately, Gerald was knocked out in the 5th round, but give him credit for getting into the ring with the defending champion, Deontay Wilder, whose record now is a spotless 38-0 with 37 knockouts. Washington’s record is now 18-1-1 and 12 KOs. Washington was winning the fight heading into the fateful 5th round and by his own admission “lost focus for a moment.” That moment was Gerald’s unfortunate demise.

The pugilist – Part 2: Trojans fans had love to Gerald Washington and his numerous references before the fight to being a former USC Trojan. Gerald would flash the two-fingered Trojans victory sign before his championship battle and wore a “SC” logo on boxing shorts into the ring. He also wore a “SC” hat and football shirt around town. Gerald even had his own fan cardinal and gold fan club in Birmingham (Ala.). When Deontay Wilder’s hometown fans chanted “USA” during the fight, Washington’s fans countered with “USC.”

The deadline: The deadline to renew your football season tickets is this Tuesday, February 28. Let the panic begin!

The deadline – Part 2: If you have not yet renewed your football season tickets and have enjoyed seeing the Trojans Marching Band perform at Notre Dame and the noontime Chicago Navy Pier Pep Rally on the Friday before the big game with the Irish, you might want to consider giving an extra donation to the Trojan Marching Band’s Notre Dame Travel Fund on your season ticket renewal order.  If you’re renewing online, just check the box as it pertains to the TMB and enter an amount.

A lesson learned: I remember when there were those that felt that former Trojans linebacker Michael Hutchings would never develop into a linebacking force. It’s a lesson for other players to observe that by the end of his career, Hutchings was a very good inside college linebacker who played one heck of a Rose Bowl game against Penn State.

A lesson learned – Part 2: Michael Hutchings etched his name into the Trojans Rose Bowl memory book against Penn State when he made a key stop against the Nittany Lions Big Ten Offensive MVP late in the game to help setup the dramatic finish.

A lesson learned – Part 3: One current Trojan that could be following in the Michael Hutchings developmental story is young linebacker John Houston Jr., the former Gardena (Calif.) Serra High product. Many Trojans fans are waiting to see if Houston can live up to his prep hype.

The cover: It’s probable that Sam Darnold will grace all or most of the preseason college football magazines. The real question is if Sam was not on the cover of the mags, which Trojans would you put in his place?

The turnstiles: In six home games last season, the Trojans average attendance was 68,459. With the Trojans playing their first 3 games in the Coliseum against Western Michigan, Stanford, and Texas, and considering the presence of Sam Darnold and a high national ranking, it figures the Trojans should significantly eclipse last season’s average home attendance.

The last word: So, you think you know your USC jersey numbers. Okay, besides Sam Darnold wearing No. 14, what other Trojan wears the same number on defense? No peeking or cheating.