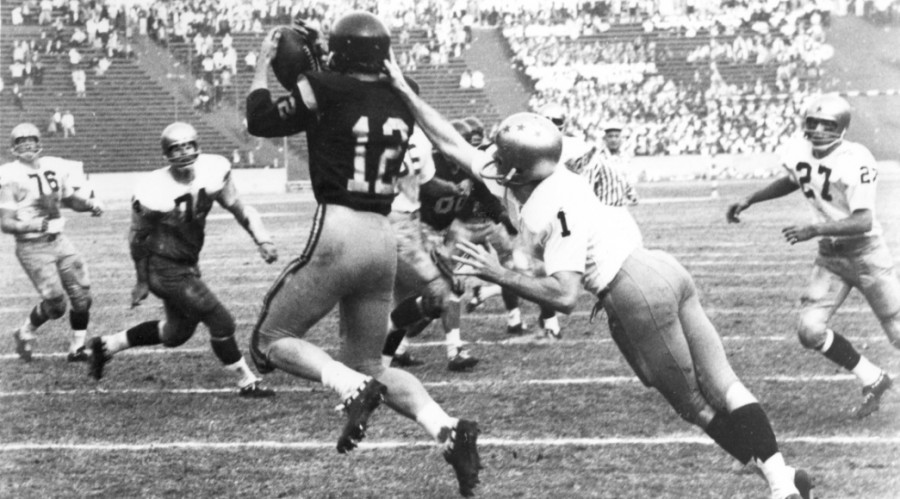 Passing of a legend: For a younger set of USC Trojans fans, they probably don’t understand the sorrow, emptiness, and attention that the previous generation or two are lamenting upon learning of the passing of former Trojans broadcasting legend Tom Kelly. To the young’uns, Tom Kelly is just a name, but for older cardinal and gold folk, that’s like saying the Beatles were just a band.

Passing of a legend – Part 2: For those not all that familiar with Tom Kelley’s impact, trust me, all the accolades, tributes, and celebration on his life are as true as when Harrison Ford’s Hans Solo recently telling a new generation of Star Wars characters that the glorious myths and tales they heard about the Jedi past were all true. The stories and memories of Tom Kelly are also true. He is the best that ever was calling USC football. Even current Trojans radio voice Pete Arbogast says there is only one true voice of USC football and that was Mr. Kelly.

Empty heart: With the recent passing of Tom Kelly, I feel like a good part of my Trojans youth, as well, has just passed on. I feel extremely privileged to have been part of Kelly’s adoring audience in the press box prior to and during USC home games the past decade. For others like me, his commanding, golden voice was USC football – even just sitting in the press box and holding court was mesmerizing.

Bleeding cardinal and gold: Unlike the Dodgers Vin Scully, Tom Kelly – who passed from a long battle with cancer just before his 89th birthday – wore his USC emotions on his sleeves. Those that didn’t like his “homerism” would begrudgingly admit today that “TK” was awesome in describing a play, the mood and atmosphere of a game, the sights and sounds of a stadium, and what a storyteller he was.

A football aficionado: If Tom Kelly acted like a played the game from his own personal observations, it’s because he did. Prior to entering broadcasting, he played football at Northland College in Ashland, Wisconsin, before an injury curtailed his collegiate career. That budding broadcasting career brought him to L.A. to call USC sports for five decades.

The wink: I first met Tom Kelly in 1963 as a 13-year-old when he was calling a USC basketball game against Stanford at Cal State L.A. Those were the days when the Trojans were forced to use alternate sites for some of their basketball games. I remember my dad “walking me up” press row so I could see Kelly in person. He was such a large presence to me, and I remember he gave me a wink. That wink was bigger than seeing Trojans giant star center, Gordon Martin, in person.

Back to the future: When I heard Tom Kelly, a member of the USC Athletic Hall of Fame, talk the last several seasons in person before football games, it was like I was 13-years-old again. I can honestly say that something will be missing during next season’s home games.

The entertainer: Till the end of his appearances in the Coliseum press box due to declining health, there was nothing like looking back where Tom Kelly was sitting after a good or bad play by the Trojans because you knew he was going to make a comment or remark, which was normally either spot-on or knee-slapping funny.

Mr. Cliché: I also can’t think of anybody with more clichés to bring a play or moment to life than Kelly. Some of my favorites were “Oh mercy nurse;” “Pressure is ten cents a ton;” “Like a thief in the night;” “he’s quicker than rent;” and his famous “It’s an Irish afternoon.” There was something about an Irishman saying “its an Irish afternoon” that just seemed to resonate the event to larger than life status.

Remembering 1964: Tom Kelly had many great calls of USC/Notre Dame games, and one that I’ll always remember from my youth was his description of the great 1964 touchdown pass from Craig Fertig to Rod Sherman (photo above) in the Coliseum to upset the undefeated and No. 1 Irish, 17-14. Hosted by Tom Kelly, check out this “ESPN Classic” show with film footage, radio call, and interviews of the participants from that upset: https://www.youtube.com/watch?v=4_1AQySWRHU

Epilogue: So in celebration of Tom Kelly’s magnificent career, let’s all celebrate with his historic calls and color from the historic 1974 “Comeback” against Notre Dame: https://www.youtube.com/watch?v=iceQZSOGH-8

Here come the Irish: No question about it, Tom Kelly qualifies as a true SoCal broadcasting legend. Home USC games against the Notre Dame from now on will always be “a Tom Kelly afternoon.”

Legacy switcheroo: The Trojans received a Class of 2017 commitment from tight end Erik Krommenhoek (6-6, 245) of Danville Monte Vista (Calif.) High. Erik’s parents both attended UCLA, and now about that “you’re a Bruin for four years and a Trojan for life… “

The rooster sleeps: I am told by an insider that Trojans football practices in the fall will be in the afternoon.

Head scratcher: I could never understand why Trojans football practices were held in the early morning under former coach Lane Kiffin and Steve Sarkisian. Could it be that because Oregon did it and the two former USC head coaches thought it would make the Trojans equal to the Ducks as cutting edge programs? Since when does USC emulate another program for credibility?

Recruiting question: Now that it looks like the Trojans are at least in the ballpark in the recruiting of current Alabama commit Nagee Harris, the magnificent running back out of Antioch (Calif.) High, how does that affect the current soft commit of Stephen Carr, a sensational running back out of Summit High in Fontana, Calif.?

Recruiting question – Part 2: In terms of playing time, there shouldn’t be any effect on the recruiting of Nagee Harris or Stephen Carr. Both players know there is competition at any of the elite schools they’re being recruited, and both are aware of the masterful use of running backs by Trojans RB coach Tommie Robinson. And both players are aware that two pretty running backs, Reggie Bush and LenDale White, seemed to mesh well.

Schedule balance: As you’re probably aware, the Trojans have scheduled the Fresno State Bulldogs at the Coliseum in 2019, 2022, and 2025, which drew some murmurs from the masses. In contrast, Fresno State has announced it will host Sacramento State in 2019 and 2022. No protest marches have yet appeared in the Central Valley.

Good deal: Trojans fans can now USC fans can purchase mini-plan ticket packages for the 2016 football season. Fans can choose mini-plans in increments of 2 to 6 games, including the Oregon and Notre Dame contests! Mini-plans allow fans to purchase only the games they want to attend, as well as save money off single game pricing and get priority seating over individual game ticket buyers. Mini-plan packages start at just $70, with pricing options and seating locations available at all levels. For more info, call 213-740-GOSC or visit USCTrojans.com.

FYI: Individual Trojans football game tickets will not be available for purchase until late July.

Just wondering: If his health permitted and he was available, would Trojans former athletic director Pat Haden return to NBC to do the analyst work on Notre Dame football home games if the network came calling?

The last word: And to all of you loyal WeAreSC readers, here’s wish to you and your family a rewarding, peaceful, entertaining, and safe and sane Fourth of July.