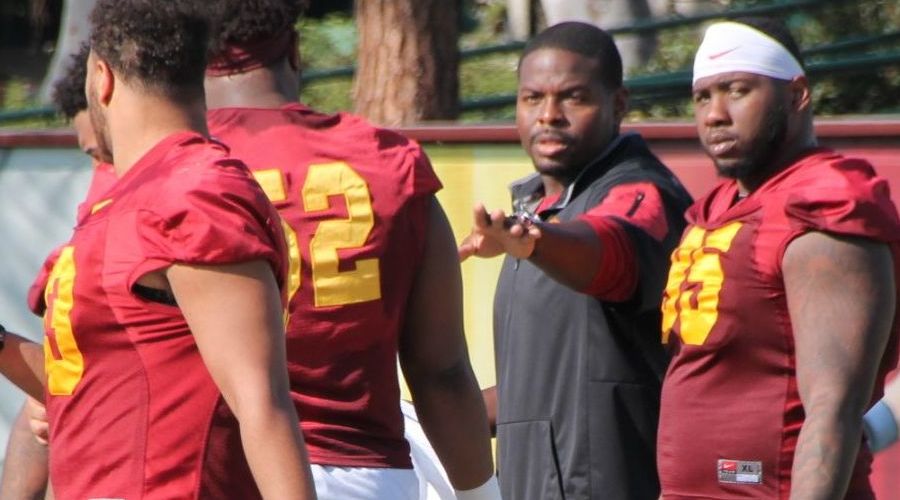 The process: Rest assured, the Trojans will eventually hire a running backs coach. Remember, Clay Helton took his time with the defensive line coach replacement last spring, and nobody is complaining about the hiring of Kenechi Udeze (photo above) and his first-year results, both on the field and recruiting.

Food for thought: Thus far in the RB coach hiring process, it appears that former Trojan Kennedy Polomalu will stay with the Minnesota Vikings while former UC Davis head coach Ron Gould has joined the Stanford Cardinal. There are other rumors regarding another Pac-12 coach as a possibility. Other in-house options include moving linebackers coach Johnny Nansen back to coach the running backs, but that would create a linebacker position opening. Even former Trojans wide receiver great and current staffer Keary Colbert has been mentioned as a RB coaching candidate. Heck, even current Trojans QB coach Tyson Helton’s name has been bandied about.

IMHO: FWIW, I would leave Johnny Nansen at linebackers coach since that was what he played at Washington State, and Johnny seemed to fit in well at that coaching position last season. If it ain’t broke, don’t fix it. Same goes for Tyson Helton. As for Keary Colbert, I have no doubt that someday he will make an outstanding receiver coach at Troy, but he would be a true apprentice at coaching running backs.

The whole truth: On the positive side, whoever gets the RB job, there’ll be no lack of talent and experience, so help me Robert Jones ll, Aca’Cedric Ware, Dominic Davis, Vavae Malepeai, and Stephen Carr.

Still alive: Despite what former Trojans running back coach Tommie Robinson said regarding his abrupt departure to LSU, it has done little to slow down rumors, innuendo, and debate over the exodus of the popular assistant coach. One rumbling is that Robinson’s hasty departure was tied to a contract/financial issue. If true, it would basically reaffirm Trojans athletic Lynn Swann’s public statements that while going to the Rose Bowl was great, the 2016 Cardinal and Gold still didn’t win the Pac-12 Conference and/or make a CFP appearance and that, IMHO, could be tied to any future salary structures, incentives, and pay raises.

Still alive – Part 2. Since assuming the head coaching job on a permanent basis, Helton has guided the Trojans to a 2015 Pac-12 title game appearance, reversed a 2016 1-3 start by finishing 10-3, which completed a nine-game winning streak that included a dramatic Rose Bowl victory over Penn State and a final No. 3 national ranking. Despite all these accomplishments, however, both Lynn Swann and Clay Helton agree that winning championships is the lowest level of expectations at USC, and that was not executed in 2016.

Still alive – Part 3: With some impressive numbers and some obvious overall progress by Helton, his staff, and players, Lynn Swann has already commented that he likes the progress of what he sees from Helton’s program. However, is it possible that Swann needs further assurance on Helton’s future, which could influence future pay raises, bonuses, and rewards?

The bank account: You won’t get much argument that money has never really been an issue within the Trojans football program. It has been long accepted that USC assistants are generally compensated with successful results. You never ever heard complaints from Pete Carroll’s assistants. Because of Carroll’s resounding success, it was easy for Pete to go to bat for his assistants and get the monetary rewards for his staff. If Helton’s program continues to rise, it shouldn’t be hard for the coach to hit for the fences with his assistants in due time.

The bottom line: The upcoming 2017 season should provide Clay Helton’s program the opportunity to bolster Lynn Swann’s thoughts on the future direction of the program. All Helton has to do to cement his future in the eyes of Swann would be to win the Pac-12 title this upcoming season and make a legitimate run at a CFP semi-final invitation. It is certainly doable.

Been there, done that: If anybody knows what success looks like at both the college and NFL level, it’s Trojans athletic director Lynn Swann. He was a strong contributing member to the Trojans 1973 National Championship and played in two Rose Bowls. He was a consensus 1973 All-American, played under legendary USC head coach John McKay, and went on to win Super Bowls with the Pittsburgh Steelers under legendary head coach Chuck Noll. Swann, a member of the USC Athletic Hall of Fame (2005), was also inducted into the Pro Football Hall of Fame in 2001. If anybody also knows success and what a great coach looks like, it’s old No. 22.

The carpenter: As far his philosophy as an athletic director, Lynn Swann says, “I don’t want to be a nail on the wall. I want to be someone who decides where the wall goes.” Trojans fans hope that Swann will use that same philosophy in taking an active role in the upcoming Coliseum renovations, which has had more than its share of detractors and criticism.

Get the message: Recently on the WeAreSC message board, a respected poster, Troy70, claimed he/she got an email regarding seating in the to-be-renovated Coliseum and posted it. According to Troy70, part of the email read, “All Trojan Athletic Fund seats will be 20″ wide, 3″ more legroom & cupholder. To pay for the new seats, handrails & legroom (25+ million) a one-time capital restoration gift is required for All seats in these priority sections. Price will range from 500 to 7,500 per seat with several tiers in-between, based on location. Donation can be paid over 4 years.”

Just wondering: Curious that we haven’t heard much from athletic director Lynn Swann regarding the Coliseum renovation project. Any changes or proposed changes? Maybe it is what it is…(gulp).

Getting a line: It’s entirely probable that with senior offensive lineman Toa Lobendahn being held out of spring ball due to surgical rehab, the starting offensive line that finishes spring ball will not be the one that lines up against Western Michigan in September.

On the left: All eyes in the spring will be on the replacement of two All-Pac-12 offensive tackles, Zack Banner and Chad Wheeler. The replacement at left tackle for Wheeler would appear to be the most intriguing. Will offensive line coach Neil Callaway focus in on junior-to-be Chuma Edoga, considered by some a right tackle, or will the veteran O-line coach look at some of the young newcomers like Roy Hemsley or Clayton Johnson?

Help wanted: While senior-to-be Nico Falah will be the returning starting center in 2017, who will be Nico’s backup? One candidate, of course, is redshirt freshman Cole Smith, the son of former Los Angeles Rams all-star center Doug Smith, who is also a former Trojans offensive line coach.

In memory: It was of great sadness to learn of the unexpected passing of former Trojans assistant football coach and offensive coordinator John Jackson Sr. at 81. The coach was not only a great USC football mentor (1976-81), but just a wonderful and honest person. A fixture in the second row of the Coliseum press box during home games, John, who was instrumental in the Trojans 1978 national title and three Rose Bowl wins, always gave a great perspective on the current state of Trojans football, especially the running game. The coach certainly knew how to run the football as illustrated by his All-America tailbacks in Marcus Allen (Heisman), Charles White (Heisman), and Ricky Bell (Heisman runner-up). A wonderful father and grandfather to John Jr. and John lll, John Sr. will be greatly missed, and Trojans home games in the press box won’t be quite the same.

In memory – Part 2: Former USC Hall of Fame radio voice Mike Walden (1966-1972) has passed away at 89. Having known Mike personally for several years, he was a great guy and was a true Midwest, guy-next-door personality to everybody he came in contact. His description and enthusiasm of Trojans football was outstanding. Mike always dressed in colorful clothing attire, which was also part of his colorful trademark. Many may not be aware, but he was also at one time one of the “voices” of the old Milwaukee Braves.

Triple sadness: So, in the span of a year, the Trojans have lost two of their most notable broadcasters in the legendary Tom Kelly and the personable Mike Walden, and a fantastic assistant coach in John Jackson Sr. All three were such great contributors to USC football and athletics in general. Say it ain’t so, Joe.

Family genes: Were you aware that former Trojans Stevie Tu’ikolovatu’s uncle, Sione Pouha, was once a third-round pick of the New York Jets at age 26 in 2005 and played seven season in the Big Apple with 55 starts?

The last word: Asked about his favorite L.A. eatery, Stevie T. told the Tampa Bay Times, “Any Korean barbecue. It’s all assorted different meats. They have pork, chicken, beef, whatever you like, and they have the grill in the middle of your table and they cook it right there. You don’t even want to get me started on that. I’ve actually gotten full there. They haven’t kicked me out yet.”