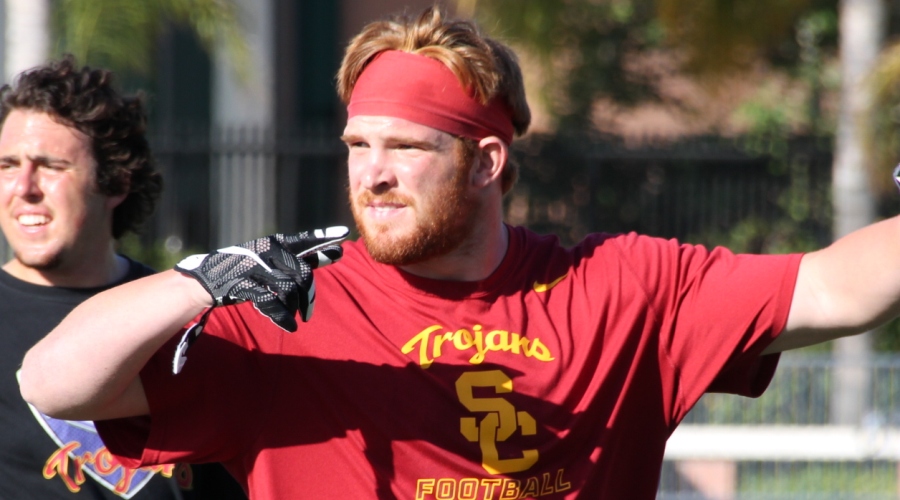 The odds makers: It’s anybody’s guess what the fluctuating odds will be for game week when the Trojans and Alabama battle each other on Sept. 3 in Dallas. Very early opening lines established Alabama as 14-point favorites, yet the latest odds to come out of Las Vegas saw those odds reduced to 10 points.

The odds makers – Part 2: So why the points decrease? Is it really conceivable that the decrease in points is due to Alabama possibly losing junior All-SEC left tackle Cam Robinson and safety teammate Lawrence “Hootie” Jones for the opener against the Trojans after both were arrested by police recently over a weapons and narcotics charge?

Sold out: The Trojans allotment of tickets for their confrontation with Alabama in the home of the Dallas Cowboys is sold out, but tickets will be made available by the game’s organizers in mid-June through a public sale on Ticketmaster. Expect prices to be high for two storied teams that have not meet since 1985.

FYI: The Cowboys’ stadium seats 80,000 and figures to be very crimson looking if neutral site history is any indication.

The victors: Publicity for the big game in Dallas is reminding fans that Alabama last met the Trojans in 1985 and soundly defeated the Men of Troy, 24-3, in the Aloha Bowl in Honolulu. Alabama has a 5-2 lead in the series with the Trojans that first started in 1938 with a loss to the Crimson Tide, 19-7, in the Coliseum.

Recruiting wars: With Alabama already having a commitment from California’s No. 1 Class of 2017, Najee Harris, the stud running back from Antioch High, and The Tide looking to sign arguably Cali’s No. 2 prospect, cornerback Darnay Holmes (Calabasas High). It would be something if the Crimson Tide actually got both California studs to sign in February. Of course, Alabama’s lead recruiter in California is some guy named Lane Kiffin. Heard of him?

Recruiting wars – Part 2: When you wonder how important it is for the Trojans to defeat Alabama in September or at least put on a good show, Najee Harris and Darnay Holmes are two prime pieces of evidence.

The candidate: Coming off knee surgery, junior center Toa Lobendahn has yet to be able to show offensive line coach Neil Callaway just what he can do on a football field, but that didn’t stop the Rimington Trophy Watch List putting Lobendahn’s name on the docket.

The vacant Lott: Trojans junior corner Adoree’ Jackson and sophomore linebacker Cameron Smith (photo above) have made the watch list for the Lott Impact Trophy. The award, named after the Trojans great secondary performer Ronnie Lott, recognizes the nation’s best defensive player who also demonstrates elite character. Since its inception in 2004, no Trojan has ever won the award named after the Trojans legend.

Still Bush: Reggie Bush told radio host Colin Cowherd that in order for him to return to the his alma mater, some matters still need to be fixed and at the present time he feels he was not treated fairly by USC. Hey, Reggie, what needs to be first fixed is an apology from you on behalf of you and your parents for taking the Trojans program into the NCAA probation abyss.

Double vision: Yes, Reggie Bush, we can all agree that the NCAA really ripped the Trojans beyond all degrees of fairness, but college sports most hypocritical and nefarious governing body wouldn’t have had a chance for a draconian ruling against the USC had not the actions of the Bush family not taken place.

The tunnel: According to Reggie Bush, the Trojans have asked him to lead the team out of the Coliseum tunnel before a home game, but he said he wasn’t ready yet. There are still some things that “have to get fixed.” If this is true, then all the people that were negatively affected – starting with former players that paid the probation’s price – should run out onto the Coliseum behind him when No. 5 is ready.

Home sweet home: At the end of his conversation with Colin Cowherd, Reggie Bush said, “I will always, always have love for USC and that will always be home for me.” Feel free to made your own comment or judgment. As for this space, Bush’s remarks leave more questions than answers.

The brotherhood: If senior-to-be San Clemente (Calif.) High quarterback Jack Sears decides to join current Trojans quarterback Sam Darnold, so when was the last time that two quarterbacks from the same high school were on the Trojans roster?

Name game: When your last name is Petite, you’d expect a rather small and cutesy athlete; however, Trojans sophomore tight end Tyler Petite is anything but small and cutesy, listed at 6-foot-6, 235 pounds.

The windfall: So how much money does USC stand to make in parking revenue by allowing the Rams games to be part of their parking structure dynamic?

The last word: Recently, the Trojans Ticket Department gave fans a chance to change their seating locations. If you did, was it a preempted strike in anticipation of the future renovated Coliseum seating plan?