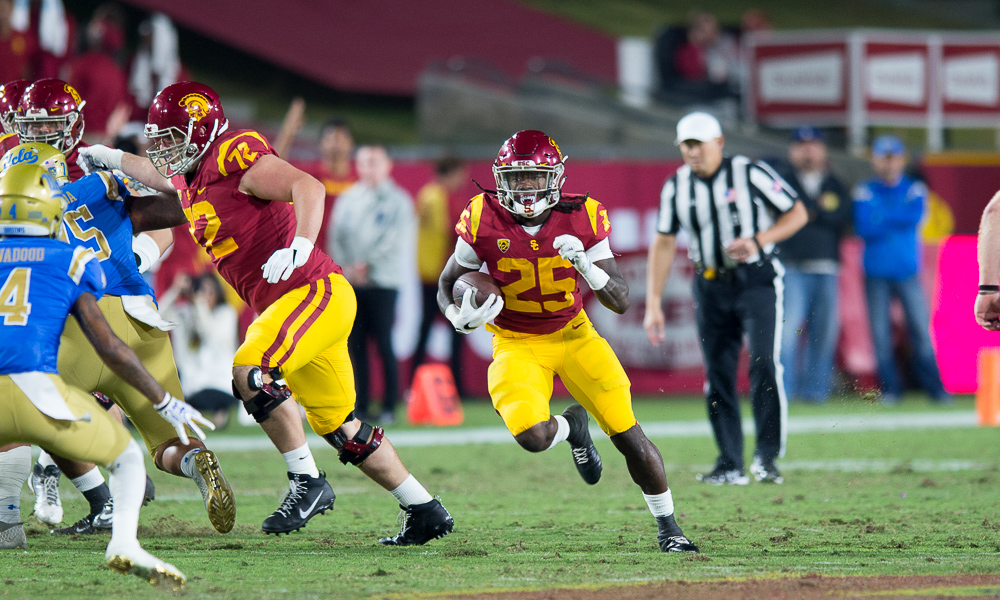 Looking in the mirror: Asked about Ohio State, Trojans junior All-America tailback Ronald Jones ll (photo above) said, “When I look at Ohio State, I see us and our traditions like national championships, Heisman Trophy winners, All-Americans for sure.”

Center of attention: Most folks are looking at a lot of tantalizing matchups when the Trojans take on Ohio State in the 82 Cotton Bowl on Dec. 29. You might want to focus on a potential mismatch between Ohio State starting center Billy Price, the 2017 Rimington Award winner as the nation’s best center and the Big Ten’s offensive Lineman of the Year, and Trojans’ senior nose tackle Josh Fatu supported by true freshman Brandon Pili. Price is a beast, but Fatu will come to play.

Home sweet home: Another good outcome for Trojans offensive coordinator Tee Martin not returning to Tennessee as the Vols’ head coach was Tee’s admission that his wife loves living in Southern California. As they say, “A happy wife is a happy life.”

Tennessee homecoming: Another interesting aspect of Tennessee not offering Tee Martin its head coaching position is that its new athletic director, Phil Fulmer, was the Volunteers’ head football coach when the Vols last won a national championship in 1998. Fulmer’s quarterback was Tee Martin. Go figure.

Logical conclusion: It would seem that Tee Martin would naturally be assigned the open quarterback coaching position since he was a highly successful quarterback who also played in the NFL. Martin revealed this week that nothing has been said about him assuming the quarterback coaching position, but he did say he has enjoyed being a wide receivers coach as a change of pace since he has played quarterback since his youth and eventually coached the position. When you see the Trojans’ wide receiver that have gone on to the NFL and had success, it seems to me he has done pretty well coaching the wide receivers.

Patience is a virtue: For those Trojans fans and media that are clamoring for an instant “Tyson Helton” dominos effect on the Clay Helton’s staff, remember the head coach has a history of taking his time filling positions, or have you forgotten when Helton took his time two years ago and eventually hired Kenechi Udeze and that hire turned out pretty good. And last season, some were getting pretty antsy waiting for a running backs coach to be signed, and, voila, Deland McCullough came aboard and has been a major positive hire.

All in the family: As you may have heard, with the departure of Tyson Helton to Tennessee, Bryan Ellis, formerly the Trojans’ offensive quality control assistant, will be the Trojans’ interim quarterback coach. FYI, Ellis is a former assistant at Western Kentucky (Tyson Helton and Neil Callaway connection) and also played quarterback at University of Alabama-Birmingham, which was coached at the time by current Trojans’ offensive line coach Neil Callaway.

Early signing and redesigning: There are mixed coaching feelings regarding this Wednesday’s inaugural “early” signing period, which last three days. Already the Trojans’ recruiting board is full of on-the-record and off-the-record revelations. Washington (DC) Woodson star running back Mychale Salahuddin has backed off his commitment to Troy, and now running back coach Deland McCullough has turned his attention to Indianapolis (Ind.) power back Markese Stepp (6-0, 230), who is on his official USC recruiting trip this weekend, and did we mention that Markese was once a Notre Dame commit? And the Sunday morning bulletin, Stepp announced to the world that he had committed to USC, and he will sign with the Trojans on Wednesday. Of course, it didn’t hurt that Markese’s father played with Trojans’ running back coach Deland McCullough at Miami (Ohio). Stepp’s family accompanied him on his recruiting trip to SoCal.

Early signing and redesigning – Part 2: One of the more intriguing USC prospects is Ohio offensive tackle Jackson Carman (6-6, 330) from Fairfield, Ohio, who during this weekend’s official USC recruiting visit was tweeting out messages such as “Man, I love California” and “Why dream it, when you can live it?,” which was accompanied by a beautiful SoCal sunset from a rooftop. Although many think that Ohio State is still the team to beat, Jackson is a former Southern California resident and that can’t hurt. Will we see an early signing on Wednesday for this Midwest giant after what appears to be a successful visit to L.A.?

Early signing and redesigning – Part 3: Okay, I’ll say it. If the Trojans can flip UCLA superstar CB Olaijah Griffin, a current UCLA commit, from the clutches of Chip Kelly, I’ll be impressed. Give the Trojans for getting a Griffin home visit with Clay Helton and Johnny Nansen, but, in the end, it’s all about the signature that decides a recruiting victory of defeat.

Early signing and redesigning – Part 4: And then there is Bellflower St. John Bosco safety Jaiden Woodbey (6-2, 205), who appeared set on Ohio State and now appears to be strongly considering the Trojans. Folks, it’s that time of the year and when a commit reroutes to your favorite school, it’s a sugar high.

Keeping track: Since it continues to be a source of curiosity, today’s (Sunday) Dallas weather report is partly cloudy with a high of 60 degrees, low of 45, 0 % precipitation, and 73 % humidity.

Weathering a storm: Trojans’ tailback Ronald Jones, a Texas native, said it can get quite cold in the Dallas area after Christmas, but he added that it won’t make much difference since AT&T Stadium is a domed stadium.

Needing a toe: Although Trojans head coach Clay Helton says that junior outside linebacker Porter Gustin is day-to-day because of a toe injury, you have to wonder how effective Porter can be after being out for so long a period of time and is it worth it. I’d be totally surprised if he doesn’t return for his senior season.

Jersey boys: Due to Ohio State being the higher ranked team in the final CFP poll, the Trojans are the designated “visiting team” in the 82nd Cotton Bowl and will be wearing their white visitors uniform.

Turnovers: Clay Helton said this week that up to 10 players on the Trojans’ roster could be headed for the NFL if their evaluations come back positive. If true, that’s quite a number, which would be a noticeable redo of the roster. The thought of just Sam Darnold leaving would be jolting enough.

Projections: ESPN NFL talent evaluator Todd McShay believes that if Sam Darnold went into this spring’s NFL draft, he’d be taken by the Cleveland Browns as the overall No. 1 pick. McShay says, however, that most evaluators believe Darnold would be best served by spending another year playing at USC.

No brainer: Can’t think of a better selection than junior snapper Jake Olson for the Trojans’ 2017 Most Inspirational Player Award, as formally announced at the team’s Wednesday banquet.

Hitting and hitting: Clay Helton was heavily criticized when the Trojans lost to Wisconsin in the Holiday some years back, and the biggest criticism was that he team didn’t “hit” enough in bowl practices in preparation for the physical Badgers. Helton said the team would “hit” in preparation for Ohio State and announced this upcoming week’s Monday and Tuesday practices will incorporate physicality, which is music to many Trojan fans.

The headache: It’s been two weeks since the Pac-12 Championship Game against Stanford and starting offensive guard Andrew Vorhees has been cleared to practice. That must have been some shot that Andrew took to his head, and now Vorhees must prepare for Ohio State, which is probably the most physical defensive line the Men of Troy will have faced all season.

The irony: On the day that the Pac-12 champion Trojans offensive team members and Ohio State’s defensive team members meet the press on Dec. 27 at the Omni Downtown Dallas, Disneyland will be hosting its Rose Bowl/CFP semi-final media day with the players from Georgia and Oklahoma.

The last word: Unlike when the Trojans came out of the AT&T Stadium visitor’s tunnel in 2016 to face Alabama with the upfront players on all fours barking like dogs, expect the Trojans’ Cotton Bowl grand entrance to be a traditional entrance of no nonsense, which would be an improvement by itself.