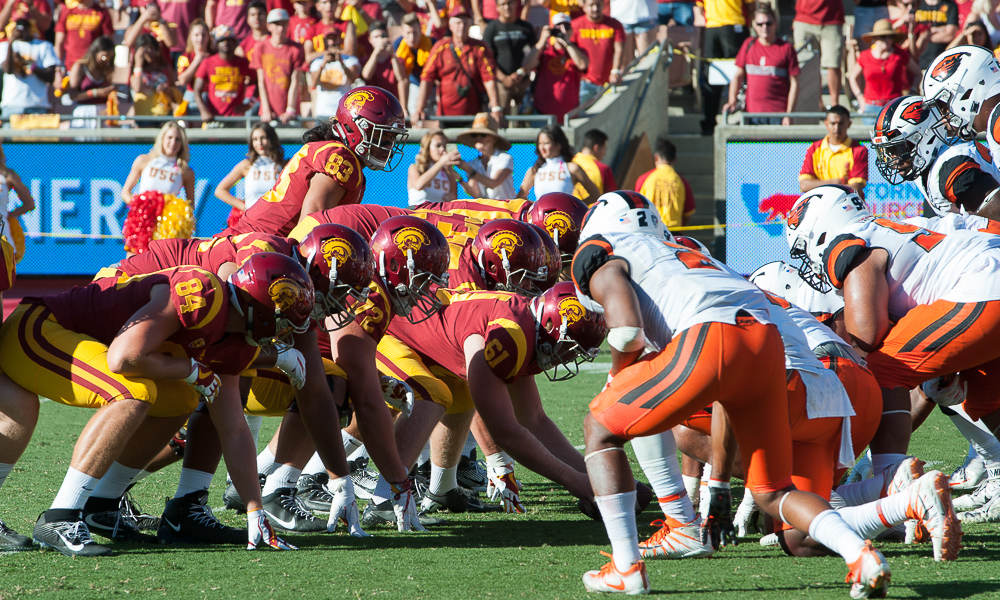 IMHO: There’s little to no debate that the Trojans’ quarterback competition will get the majority of the attention in training camp, which begins on Friday, Aug.3. However, the equal but less glamorous scrutiny should also be focused on the Trojans’ offensive line, which will have as much to do with the success of the 2018 season as any part of the team. The simple truth is that as O-line coach Neil Callaway’s offensive line goes, so will the offense, especially against power defensive teams with a physical presence.

IMHO – Part 2: Don’t be misled by the fact that the Trojans have an “experienced” group of returning offensive linemen. It’s fool’s gold to think that experience” will get the job done because it won’t. It takes talent and attitude with attitude being equal to talent. Thus far, I haven’t seen an attitude – namely nasty – on a consistent basis. After watching over two generations of USC offensive lines, some of which have been the best in college football history, the returning group of 2018 offensive linemen do not have a track record of playing physical football – either by performance or due to scheme. As a group, they are wonderful student-athletes, a joy to interview, and easy to root for. However, in the end, it’s all about production, and they have a lot to prove and will have the opportunity with this season’s schedule that they mean business – nasty business. As part of “nasty”  business, it means finishing the block and thumping the opponent into the ground.

IMHO – Part 3: Clay Helton says the Trojans will be a run-first team and a physical unit. Well, we’ll see about that and haven’t we heard this before? History should tell us to temper the enthusiasm. No Trojans fan alive wouldn’t be gushing cardinal if Helton’s mandate is validated. Initially, all eyes will be on projected starting offensive tackles Chuma Edoga and Austin Jackson, guards Chris Brown and Andrew Vorhees, and center Toa Lobendahn. No, we’re not calling out these athletes in a negative light. On the contrary, but these five names are the ones being most talked about. They deserve the chance to show what they can do as a unit on the field. While there figures to be some tweaks in personnel as the season progresses or perhaps as early as training camp, these are the guys that will be begin under the performance microscope.

The Drevno factor: There have been reports that running backs coach and running and pass protection coordinator Tim Drevno will have major input into the Trojans’ offense both now and in the future – with emphasis on a power running game. The former offensive coordinator under Michigan’s Jim Harbaugh the past three seasons, there is conjecture that if and when Neil Callaway hangs up the cleats, Drevno will slide back into his natural coaching position of offensive line coach, a position he held at Troy (2014) prior to his earlier departure to Ann Arbor.

The Drevno factor – Part 2: It’s also been out there on the streets that Drevno could be a major factor of bringing back the fullback position or at the very least returning the “H” back position out of the offensive tool box. Most Trojans fans would give a standing ovation to that possibility, especially in short yardage or goal line situations. You can talk about the controversial Coliseum renovation, but more than a number of Trojan fans would like to see some kind of offensive identity renovation.

Rumors: You may have also heard the recent rumor that a group of veteran Trojan football players went into to see Clay Helton to discuss and suggest some improvements for 2018. One of the unconfirmed “rumors” is the players would like more physical practices to become, well, more physical. If this rumor is true and later addressed, it would certainly get thumbs-up from a large group of former Trojan football players who are more than a little perturbed regarding the lack of “manliness” especially on the O-line.

Media Day: Pac-12 Football Media Day is this Wednesday at the Loew’s Hollywood. The media day is back to a one-day affair as compared to recent two-day schedules. The Pac-12 has tried to make its football media day an event, holding its gathering at various venues in the past like the Rose Bowl and various movie studios.  Unlike past decades, the media day has evolved into a video presentation intended for the Pac-12 Networks, leaving the print and Internet media wanting.

The tailback: Trojans’ tailback Stephen Carr made the watch list for the Doak Walker Award, a prestigious honor that goes to the nation’s premier running back. The biggest unknown concerning Carr for 2018 is the talented running back’s repaired back. Back issues are be really tricky, and we won’t know how Stephen really is until he gets knocked around.

Back-to-back: Does any other team in the country beside the Trojans have two tremendously difficult back-to-back games so early and so late in the season? The Men of Troy play at Stanford and at Texas in September while the last two games in November are at rival UCLA and Notre Dame. If coaching USC’s early and late schedule was a hamburger, they’d call it the “Widowmaker.”

High honor – Part 3: Reacting to the award, J.T. Daniels said, “It’s honestly pretty difficult for me to put into words what this award really means to me and just how honored I am to receive it. Wow, Fight on!”

On the cover: Both J.T. Daniels and Katelyn Tuohy will appear on the cover of Sports Illustrated, and Daniels walked The ESPYS red carpet on Wednesday night.

The great debate: As previously reported, Santa Ana (Calif.) Mater Dei, a longtime recruiting pipeline for the Trojans and current defending prep national champions, has been nationally pre-ranked No. 1 for 2018 by High School Football America. However, one of the Monarchs’ Trinity League rivals, Bellflower (Calif.) St. John Bosco, has been nationally pre-ranked No. 1 by Max Preps (MD No. 2). St. John Bosco has a number of Trojans recruits including CB commit Chris Steele.

The great debate – Part 2: Imagine the buildup if both Mater Dei and St. John Bosco remain undefeated heading into their Trinity League showdown on Friday night, Oct. 12, at the Santa Ana Bowl. Grab your popcorn and favorite liquid refreshment. FYI, the Trojans will be hosting Colorado on Saturday, Oct. 13, so no conflict there. If you recall, last season Mater Dei defeated St. John Bosco twice, including a dominating Monarchs’ 49-24 victory in the CIF Southern Section Division 1 title game.

Early prep showdown: The good news, if you’re looking for an early national prep showdown that will feature a number of Trojan recruits, mark your calendar for Friday night, Sept. 21, when High School Football America No. 1 Mater Dei hosts No. 2 IMG Academy of Bradenton, Florida, at the Santa Ana (Calif.) Bowl.

Early prep showdown – Part 2: The bad news regarding the Mater Dei/IMG Academy titanic is that the Trojans will be hosting Washington State on Friday night game, as well. It figures that somebody will televising the prep game so it can be recorded. Preaching to the choir, college football games should never be played on Friday night prep windows.

The last word: One of the great Southern California sportswriters of my generation and even a better human being, Mitch Chortkoff, 78, passed away last Tuesday after a long illness. Mitch was a tremendous mentor to many writers such as myself and treated everybody with such kindness, displaying a very humanistic smile, laugh, and even a trademark benevolent smirk. Despite his honored stature in the L.A. sports community, he never big-timed anybody, was a gentle soul, and was just a compassionate human being. While known to many as a basketball writer and junkie – Mitch covered the Lakers for 50 years – he also loved college football and was once a constant in the Coliseum press box covering USC football. Mitch, you will be greatly missed, and may you rest in peace.