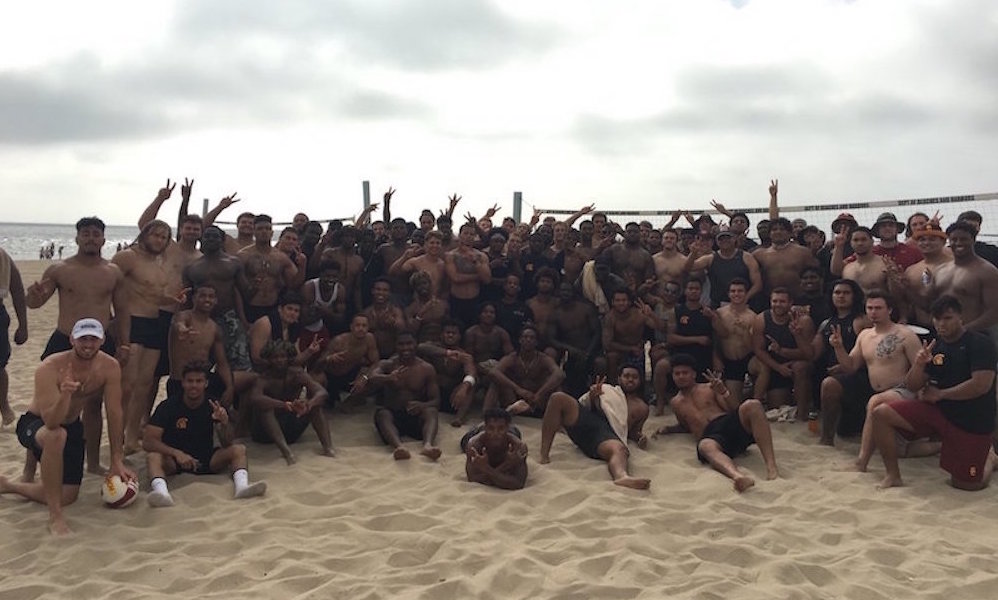 Surprise, surprise: If you were wondering where Friday’s WeAreSC Players-Run-Practice report was hiding, it’s because there was no PRP. Trojans’ head coach Clay Helton surprised his team with a trip to an undisclosed beach (photo above) for some team bonding and extended fun and games.

Surprise, surprise – Part 2: With Friday unexpected beach excursion, it meant that the Trojans had just one PRP last week, but who’s to argue with Helton’s beach “vacation.” In the overall picture of a sports program, it’s “field trips” like this beach folly that can really help tighten a team’s chemistry, and the Trojans will certainly need that with September road challenges at Stanford and Texas.

Surprise, surprise – Part 3: And for those of you sickos that need to know, the team beach photo above shows J.T. Daniels kneeling on the lower right front of the picture with a large tattoo on the left upper left side of his chest. And, yes, with his right hand he’s flashing the two-fingered “fight on” mantra, and, no, I have no idea what the tattoo shows, and does it really matter unless you think there is some deep symbolic meaning or subliminal message?

The sneak preview: “Did you watch him throw this week? How did he look?” That was the question from a well-respected former college coach who joined others with the same inquiry. Well, first there was no intent-to-hurt pass rush, no screaming 90,000 fans in attendance on Brian Kennedy Field, and certainly no prime time national television audience at last Tuesday afternoon’s PRP, but Jonathan Tyler “J.T.” Daniels, the headlining incoming freshman quarterback, made it look all too easy, like it was just another summer passing session at Santa Ana (Calif.) Mater Dei High and maybe that’s the point.

The sneak preview – Part 2: J.T. looked more like a seasoned sophomore than an incoming freshman on Tuesday. As for the competing quarterbacks, sophomore Matt Fink and redshirt freshman Jack Sears, it was their first real opportunity to scrutinize first-hand what all this Daniels commotion is about. One thing both Fink and Sears were able to gage was Daniels’ mastery of the playbook, but both returning QBs know that June and July PRP sessions aren’t going to decide who is going to be the 2018 quarterback. As Clay Helton says, “We ‘ll see what happens when there are live bullets.”

The sneak preview – Part 3: Last Tuesday, I was impressed by J.T. Daniels knowledge of the offense, often instructing veteran players where to line up and when to go in motion. He did it on more than more occasion. In terms of efficiency, he lived up to all the hype. He did, however, throw a pick-6 interception at the line of scrimmage to DE Christian Rector and had one pass attempt batted down. Toss out those snafus, and it was worth driving in from Orange County and all the predictable traffic to watch him toss around the pigskin.

The hype: Look, you’d have a valid argument that all this hype for an incoming freshman quarterback with no collegiate experience is way over the top. However, last Sunday, the Los Angeles Times had both its new USC beat writer and a veteran jack-of-all-trades columnist do separate front page stories on Daniels. Training camp doesn’t begin till early August, but the J.T. story is already compelling, and you can only imagine if he eventually starts and is really under scrutiny. Ask Matt Barkley and his family what it was like to be the starting USC quarterback as a freshman. Okay, just ask Sam Darnold and his family like in the fishbowl that comes with being the starting signal caller for the Trojans.

Amon-Ra: And you really can’t talk about J.T. Daniels this past week without again talking about his former high school and now college freshman teammate, wide receiver Amon-Ra St. Brown. Amon-Ra is anything but raw. He ran routes like a veteran, caught almost everything thrown his way, and knew what to do with the ball once he caught it. It’s possible that St. Brown could see the field before his celebrated former high school quarterback. With his shirt off, Amon-Ra has a professional boxer’s body complete with rippled muscles. He is a specimen.

Amon-Ra – Part 2: For you veteran Trojan fans, St. Brown (6-1, 190) very much reminds me of a bigger and more physical version of late USC wide receiver Kevin “Bug” Williams (5-9, 165), an explosive mighty-mite. From 1977 to 1980, Bug was considered one of the most feared college receivers in the country, catching 71 passes for 1,358 yards. Having averaged 19.1 yards per catch during his playing days in cardinal and gold, Williams once held NCAA records for highest percentage of passes caught for touchdowns in a career (35.3%) and a season (58.8% in 1978). Get the picture?

Remembering Bug: For those unfamiliar with Kevin Williams, his life came to a tragic end at just 38-year-old when as a brakeman on a freight train, he apparently died trying to jump for safety as the train crashed down a steep downgrade. A life ended way too short.

The graduate: No, not the award-winning Dustin Hoffman movie, but if you weren’t aware, former Trojans’ linebacker Michael Hutchings also remain in the Trojan family as a USC defensive grad assistant. Good for Michael and good for the defense, especially the Trojans’ young linebackers who can learn about not just playing the linebacker position, but how to become a mature player with a strong work ethic and respected leadership skills.

Getting closer: The Pac-12 announced its football media day will be held at the Hollywood & Highland location on Wednesday, July 25. The conference has returned to a one-day media day platform from its recent and misguided two-day junkets. A good move IMHO. Just because the SEC does it, doesn’t mean it works well with the Pac-12.

Media stars: The Trojans will be represented at media day by head coach Clay Helton and senior linebackers Cameron Smith and Porter Gustin. Yes, no offensive players will be at the podium. The Trojans reps will take centerstage in the afternoon somewhere between 1-4 p.m. The exact order and specific time has yet to be determined.

The legacy: One future Trojan recruit to follow is junior tight end Jack Yary (6-6, 250/Murrieta, Ca./ Murrieta Valley HS), the son of the Trojans only Outland Trophy winner and everybody’s Hall of Famer, offensive tackle Ron Yary. Young Yary received an offer from the Trojans this week, and it would be a shocker if this legacy doesn’t eventually sign with the Men of Troy. Yary right now is considered an exceptional blocker a surprisingly adept pass catcher.

The legacy – Part 2: Another Trojan legacy to keep a watchful eye is center Jack Harlow (6-2, 280/San Juan Capistrano, Ca./J.Serra Catholic HS), the son of former Trojan all-star offensive tackle Pat Harlow. I know what you’re thinking, “Like we need another center?” The answer is a resounding “yes.” A couple of seasons ago, the Trojans lost center after center and it got a little hairy. Let’s hope that if Jack continues to perform with distinction that this USC staff doesn’t pull a Lane Kiffin and bypass Jack’s older brother Sean Harlow (San Clemente HS), who went on to a very successful Pac-12 career with Oregon State and became an NFL draft pick of the Atlanta Falcons.

A success: Those that were at the Rising Stars Camp last Sunday and the Elite Camp on Tuesday agree that it was mission accomplished in terms of evaluations, bonding, and offers with much of the focus on the underclassmen, thanks to the new signing period. Everything has been moved up on the recruiting calendar, and we’ll eventually see if this early signing rule turns out to be a good thing.

Oy Veh: According to ESPN.com, the Trojans play the second toughest non-conference schedule – Sept. 1 vs. UNLV, Sept. 15 at Texas, Nov. 24 vs. Notre Dame.

Frostee freeze: Yes, it’s hard to believe that former Trojans’ defensive lineman Frostee Rucker will be entering his 13th season in the NFL and will have outlasted his more celebrated former Trojan teammates, players like Matt Leinart, Reggie Bush, LenDale White, and Sam Baker. For many Trojans, Frostee is unfortunately remembered by some as allowing Vince Young to escape the pocket, breaking contain, and sprinting into the end zone with a few ticks left on the clock for a Texas BCS title in the Rose Bowl.

Frostee freeze: Frostee Rucker, a local Tustin HS grad and a likeable and fun-loving guy, told me the only person he ever feared during his time at Troy was defensive line coach Ed Orgeron. Surprised? Not really.

Letters of Intent: Following up on an earlier email, Trojan season ticket holders received additional information regarding 2019 season tickets. Accompanied by a letter from athletic director Lynn Swann, the second two-sided letter gave an illustration of the Coliseum seating and the change in names and sections. There was also a Q&A section. One of the questions: “I have sat with friends for many years in the Coliseum. Will we be able to continue to sit together after the renovation is complete?”

Letters of Intent – Part 2: Answering the above question of continuing to sit with your friends in 2019, the relocation letter read, “Seat selection order is determined by year of season ticket purchases. Therefore, if you are looking to sit with friends you may select seats together during the latter of the two appointment times.” The appointment time refers to when a school representative contacts a season ticket to explain one’s seating options.

Letters of Intent – Part 3: The actual 2019 season ticket renewal process will take place during an online seat selection drive, which is coming this November and December.

The last word – Part 2: And a very special Father’s Day to you and yours, and remembering dads that have passed on to the big Coliseum in the sky. Love you, Dad.