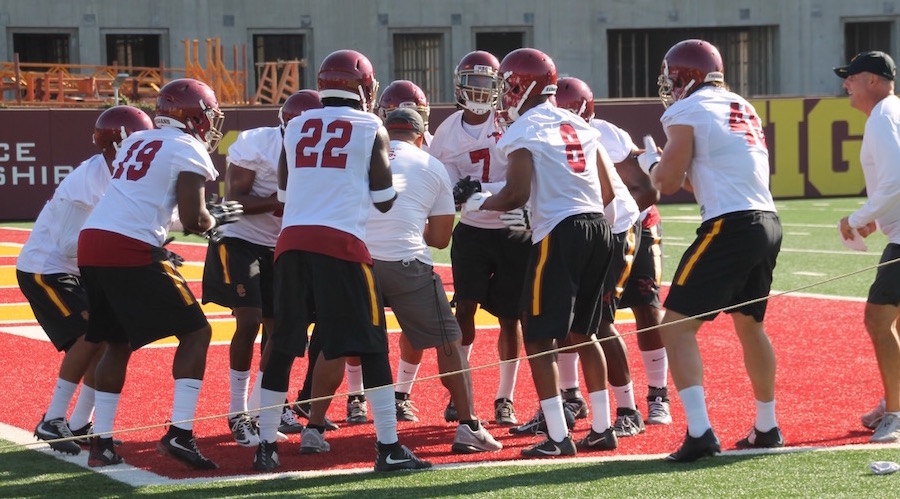 The beginning: The Trojans open Rose Bowl practice this week with activity slated for Tuesday, Wednesday, and Thursday afternoon on Howard Jones/Brian Kennedy Fields. Although closed to the general public, these practices will be a stark contrast to those in 2015 when the Trojans practiced just seven days in preparation for Wisconsin in the Holiday Bowl. Expect the Men of Troy to “hit” and prepare for a Rose Bowl that figures to be very physical and very intense.

Long range threats: While much of the Rose Bowl pregame buildup will center on the two young quarterbacks, Trojans redshirt freshman Sam Darnold and Penn State sophomore Trace McSorley, two of the most explosive sophomore backs in the country will also be on display in the Trojans Ronald Jones ll, a 2016 second-team All-Pac-12 selection, and Nittany Lions Saquan Barkley, the 2016 Big Ten Offensive Player of the Year. It could be argued that these two backfields could be the two best backfields entering 2017.

Location, location, location: You’d might like to know that the Trojans Ronald Jones ll is from McKinney, Texas, and McKinney North High while Penn State’s Saquan Barkley is a native of Coplay, Pennsylvania, and Whitehall High.

The scalper: Needless to say, Rose Bowl tickets are a hot item. I can’t tell you how many folks have called your humble correspondent for tickets. FYI, tickets on ticket broker StubHub have Rose Bowl ducats starting at $355. Most of the “reasonably priced” tickets are in the corners of each end zone.

The scalper – Part 2: The Trojans bench will be on the opposite side of the press box or on the San Gabriel Mountain’s side of the field. BTW, I would suggest that if you’re going to purchase tickets for the Rose Bowl and you have some seating options, whatever you do, sit at least halfway up or high to get a better view of the field. If you’re down low, looking over players’ heads can disrupt your pleasure of watching the game.

The temperature: If the 2009 Rose Bowl is any indication, it figures that Penn State fans will be looking to escape the cold of University Park where on Sunday the high was expected to be 25 degrees (feels like 17 degrees) with snow showers while the Pasadena high on Sunday was a predictive mostly cloudy with a high of 65 degrees.

High security: Given the times we live in, all media must go to the Rose Bowl media center, the L.A. Hotel Downtown, and get a photograph taken that is put on the press credential.

DCA: As part of the Rose Bowl festivities for both teams, Trojans and Nittany Lions are scheduled to visit Disney’s California Adventure on Dec. 27 at 2:00 p.m.

The Beef Bowl: One of the long traditions of playing in the Rose Bowl has been to dine as a team at Lawry’s Prime Rib in Beverly Hills. Unfortunately, the actual eating “competition” between the two competing teams no longer exists. Apparently too many players were gorging themselves with prime rib and felt the “after effects” the next day.

The Beef Bowl – Part 2: The last time the local media dined with the Trojans during a Rose Bowl participation week was at Lawry’s Prime Rib for the 2009 Rose Bowl Game. However, a source close to the Granddaddy of them All said the tradition of the media joining the team for a festive food evening at Lawry’s no longer is part of the  agenda. According a source, the media may wait outside the famous restaurant on La Cienega Blvd. for photo opportunities and interviews. Oh dear, and I was looking so much to the creamed corn with a slice of juicy prime rib. Say it’s not true, Joe!

Mr. Thorpe: As you, no doubt, have heard, Trojans All-American junior cornerback-wide receiver-returner Adoree’ Jackson was named the winner of the 2016 Thorpe Award as the nation’s top defensive back. As A.J. continues to pile up postseason, awards, does it help or hinder his chances of returning to the Trojans in 2017? It’s known that his heart wants him to stay, but will his NFL stock be any hotter than it is at the moment? That could be all decided by what type of performance Adoree’ displays on Jan. 2nd in Pasadena. Of course, remember that the awards and accolades mean nothing in an NFL evaluation, and there is the chance that the NFL might not see No. 2 in the same light as a corner as the awards he is winning.

Mr. Thorpe –Part 2: And how about that purple suit that Adoree’ Jackson wore at the Thorpe Awards presentation. Maybe Jackson was reminding Huskies fans of his two interceptions against the No. 4 Dawgs when the Trojans shocked Washington, 26-13, in Seattle.

Mr. Thorpe –Part 3: After winning the Thorpe Award, a number of Trojans tweeted out their congratulations to Adoree’ Jackson. One of those, former Trojans Heisman winning quarterback Matt Leinart, urged No. 2 to return for one more year. Leinart is no hypocrite because he did return for his senior season and came within one Vince Young, last second touchdown of winning another national championship.

Coaching comparisons: USC head football coach Clay Helton was a backup quarterback at the University of Houston while Penn State coach James Franklin was a four-year letterman at quarterback and a two-time All-PSAC selection at East Stroudsburg where he set seven school records as a senior to earn team MVP honors and was a Harlon Hill Trophy nominee as the NCAA Division II Player of the Year.

Coaching comparisons – Part 3: USC’s Clay Helton got his BA in mathematics and interdisciplinary science from the University of Houston while PSU’s James Franklin graduated from East Stroudsburg in 1995 with a degree in psychology and earned a master’s degree in educational leadership from Washington State University.

The Pennsylvanian – Part 2: Upon learning that the Trojans would be playing Penn State in the Rose Bowl, Cary Angeline tweeted out “playing the boys back home,” accompanied by a yellow happy face grin.

The second coming: Don’t know if you had a chance on Saturday night to watch future Trojans quarterback Jack Sears against the Huntington Beach Edison Chargers in a California State Regional Game, but if you didn’t know better, you’d swear Sam Darnold had returned to play quarterback for his beloved San Clemente Tritons. In leading “SC” to a wild 39-35 victory over Edison, Sears was as advertised. Watching him in person at Huntington Beach High was a near jaw dropping performance, both in his physical play and mental toughness. Jack took everything the highly aggressive Edison defense had to offer – like vicious hits, some of the late variety – but he continued to run, pass, and escape a fearsome pass rush just like his San Clemente predecessor Sam Darnold.

The second coming – Part 2: For Saturday night’s playoff game, Jack Sears was 22 of 32 passes for 262 yards, three  touchdowns, and rushed 16 times for 77 yards (4.8 avg.). Sears can throw any route and can go deep without a problem. Yes, Sears has the intangible “it” factor, sees the field like he’s already in college, and the best part – if you’re a USC fan, is expected enroll at Troy for the spring semester. Perhaps the only way you’ll be able to tell Sam Darnold and Sears apart this spring in terms of their play is their respective jersey numbers. For the record, Sears wears No. 16 for San Clemente High while Darnold, of course, wears No. 14.

The second coming – Part 3: It certainly was appropriate that while Jack Sears was doing his best Sam Darnold impression, Darnold was actually at the state regional playoff game to root on his protégé against Edison. Posing respectfully for pictures and wearing shorts on a brisk Huntington Beach evening, Sam blended in looking like he was just another San Clemente student. He was polite and pleasant to fans, students, and alumni, as selfies were the order of the evening. No doubt, No. 14 hasn’t forgotten where he comes from and treats others without any ego or selfishness.

The real Marcus Allen: You all know about USC’s legendary Heisman Trophy winning tailback Marcus Allen, a Hall of Famer in all things football. Penn State also has a Marcus Allen, a current junior safety from Upper Marlboro, Maryland, who was a freshman All-American.

The real Marcus Allen – Part 2: The Trojans Marcus Allen wore No. 33 during his Trojans playing days while Penn State’s Marcus Allen wears No. 2. The PSU Allen is also the godson of former Pitt and NFL standout running back Curtis Martin.

The last time: The Trojans played their last game on Nov. 26 against Notre Dame. The Rose Bowl will be played on Jan. 2. That’s a heck of a lot of time between games, almost five weeks.

Home sweet home: Although the Trojans will basically be playing in their own backyard, they are scheduled to stay in a Los Angeles downtown hotel at some point.

Will he be: One of the great mysteries of this Rose Bowl is whether former Trojans athletic director Pat Haden, who hired Clay Helton, will be in attendance. Enquiring minds want to know.

The last word: It always seems odd when Jan.1 falls on a Sunday, and the Rose Parade and Game are delayed until Monday, Jan. 2. Of course, if you’re still looking for some football, the Rams are at home on New Year’s Day (1:25 p.m. PT) to play host to the Arizona Cardinals and former Trojans Heisman winning quarterback Carson Palmer. However, Carson might not be motivation enough for football fans to come out and watch the floundering Rams. Wonder if Palmer will stay an extra day in L.A. and watch the Trojans in the Rose Bowl? That might be a rhetorical question.