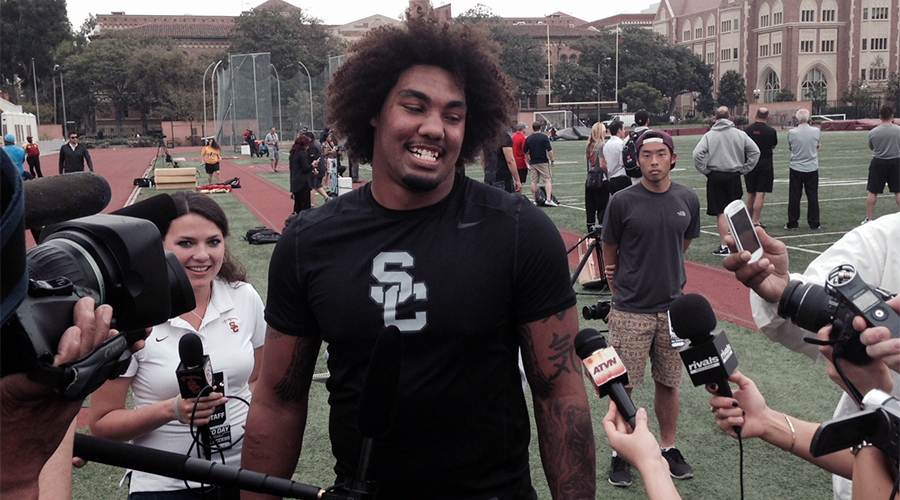 The Big Apple: Maybe it was a blessing that former Trojans defensive tackle Leonard “Big Cat Williams was selected by the Jets. After all, playing in NYC can be quite lucrative in endorsements if “The Big Cat” plays at a level most think he can.

Who knew: Since Jack Del Rio is a former USC Trojans All-America linebacker and now first-year head coach of the Oakland Raiders, some might have found it a surprise that Jack didn’t take Leonard Williams before the Jets when the Trojans All-America DL was readily available. Instead, the Raiders selected Alabama’s standout wide receiver Amari Cooper.

Bengals reunion: Cincinnati took a “chance” on DB Josh Shaw in Round 4, but it really isn’t a “chance” at all. Josh made a big mistake and has paid the price. He is an excellent NFL prospect as a nickel back, and he’ll be a fine addition to the Bengals, which already employ former Trojans linebacker Rey Maualuga.

Quoth the Ravens: Edgar Allan Poe, who lived in Baltimore for a time, would be pleased with the Ravens selection of Trojans tailback Javorius “Buck” Allen, who was selected in the fourth round as anticipated. Buck is a “one-cut” back, which translates perfectly into the NFL style of football.

Take a bow: If you said that former Trojans tight end Randall Telfer would be drafted, pat yourself on the back. Randall was taken in the 6th round by the Cleveland Browns, and, if he can remain healthy, he could be the biggest surprise of all the Trojans drafted. He’s athletic, smart, and has good character, which all adds up to being a winner.

The reality check: It really wasn’t a shock that former Trojans J.R. Tavai , George Farmer, and Aundrey Walker didn’t get drafted. However, before a total draft heartbreak, the Cleveland Browns came through in selecting linebacker Hayes Pullard in the 7th and final round.

The reality check – Part 2: J.R. Tavai (Tennessee), Gerald Bowman (Baltimore), George Farmer (Dallas), and Aundrey Walker (Miami) did sign later as free agents. Sometimes being a free agent signing can turn out to be a positive as was the case with former Trojans offensive tackle Kevin Graf (Philadelphia) and corner Nickell Robey (Buffalo).

Teardrops: I got a little melancholy when former Trojans verbal Arik Armstead, who eventually signed with Oregon, was taken in the first round by San Francisco. Can you imagine a Trojans 2014 defensive tackle tandem of Leonard Williams and Arik Armstead? Wowzers!

The question: It was a bit of a surprise that the Trojans all-star defensive tackle Leonard Williams slipped “all the way” down to the sixth overall selection. One reason provided by the NFL network was Williams’s injuries at Troy. Agree?

Thinking out loud: Was Toa Lobendahn’s performance at left tackle as a true freshman so dominating over Nebraska’s highly touted defensive end Randy Gregory that it was a major reason for Gregory slipping out of the first round of the NFL draft?

Between the hedges: So, Georgia athletic director Greg McGarity thinks his Bulldogs and their fans might like to take a trip to Los Angeles to play the Trojans in the future. McGarity says he’s looking for high profile opponents that play in iconic stadiums like the Coliseum. Greg, be careful what you wish for Greg, so help me Ohio State.

Memories: Not long ago Ohio State couldn’t wait to play the Trojans during the Pete Carroll era and it ended up being a USC blowout in the Coliseum and a Trojans comeback win in Columbus. Even during their peak years under legendary Bobby Bowden, Florida State barely escaped the Trojans with a 1997, 14-7, win in the Coliseum.

Traveling: If the Trojans were to take on a power opponent at “their” place, playing Michigan in “The Big House” would be on my schedule wish list.

Traveling – Part 2: Heck, I’d settle for playing Wisconsin in Madison but only in late September.

No-brainer: If you could only attend two Trojans road games in 2015, I’d recommend at Notre Dame and Oregon, although playing the Ducks at Autzen Stadium in late November wont’ exactly be like getting a suntan on Waikiki.

Aloha: The 2015 season could be the last season for former Trojans offensive coordinator Norm Chow as head coach of Hawaii unless there is some dramatic improvement by the Rainbow Warriors. Chow should have former Trojans quarterback Max Wittek at his disposal, which makes things doubly interesting.

Aloha – Part 2: Due to injuries, Norm Chow’s Rainbow Warriors did not have a spring game, although Max Wittek appears to be next season’s quarterback, according to reports out of Honolulu. Hawaii opens the 2015 season hosting the Pac-12’s Colorado.

History lesson: The NFL held its three-day draft carnival in Chicago, the first time The Windy City has hosted the event in 51 years.

The rivalry: After the NFL’s three-day draft extravaganza, the Trojans have returned to the top as having the most NFL draft picks and surpassing closest challenger Notre Dame.

Tie goes to the runner: The Trojans and Michigan are the only schools to have an NFL draftee every year since 1939. In 1939, the Detroit Lions drafted Trojans center Tony Tonelli, and I know what you’re thinking. Tony Tonelli and Tony Boselli.

The final word: The Arizona Wildcats will have some incentive when they come to Los Angeles on Nov. 7. First, they’ll want revenge for their near miss against the Trojans last season in Tucson, and second, the Trojans have scheduled UofA for Homecoming/Reunion Weekend, which will surely be incorporated into Wildcats head coach Rich Rodriguez’s pregame buildup.