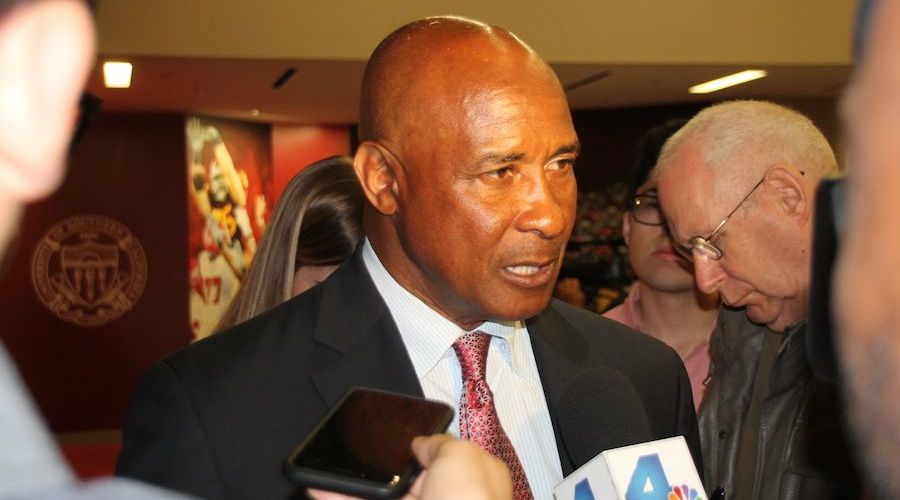 The waiting game: It’s Sunday and Trojan fans and probably a whole lot others in the Trojans football program are awaiting what is going to finally happen in the continuing cardinal and gold version of The Game of Thrones. Right now, there are a whole lot of unanswered questions in the great Kliff Kingsbury real time drama. Is he going? Is he staying? Yes, so many questions begging answers that only the participants know the answers and maybe they don’t even know. Yes, the questions and don’t kill the messenger…

The latest: The Trojans are reportedly denying the NFL – namely the New York Jets and the Arizona Cardinals – permission to interview Kliff Kingsbury, the recently hired USC offensive coordinator and QB coach. However, why is it that the Trojans are being held accountable for denying the NFL permission to talk with their new OC as opposed to – as posted in Friday’s O/NSO – Kingsbury making a public announcement saying he is signed and committed to the cardinal and gold?

The latest – Part 2: Is it true that just hours after the Trojans denied the NFL permission to interview Kliff Kingsbury, Kingsbury threatened to resign, or is this his agent’s doings? What in the name of Tommy Trojan is going on?

The protagonist: When this whole Kingsbury apparent game of gridiron chicken is over, will Lynn Swann (photo above) become the hero? Or is it Kliff Kingsbury who upon further review having buyer’s remorse?

The antagonists: Who is the bad guy here or is there one? Is it Lynn Swann for holding his new offensive coordinator to his contract? Is it Kliff Kingsbury or his agent for testing the limits of the new contract? Is it the NFL with their new rule of asking athletic directors for permission to speak to college head coaches? Clay Helton for having a 5-7 season and creating a post-season dominoes effect that has helped get us to this point?

The buyout: It’s being reported that Kliff Kingsbury has a low buyout clause if he elects to leave the Trojans. Being a private school, USC does not have to release that information, so it’s likely the low buyout info is coming from the Kingsbury camp. The fact that a buyout is already out there begs this question: Has Lynn Swann basically challenged Kliff Kingsbury to either pack his bags or get with the program?

The poll: Is there even a question that USC fans almost everywhere have grown sick and tired of this Kliff Kingsbury saga and have come to the conclusion that if the coach is not all in as the cardinal and gold offensive coordinator and quarterback coach, is it time for Kingsbury to move on?

Buyer’s remorse: If the Trojans had not denied the NFL from interviewing Kliff Kingsbury, would the former Texas Tech head coach have gone ahead and done the NFL interviews or has that become a rhetorical question?

The stand: Were you impressed that Trojans’ athletic director Lynn Swann, a member of the NFL Pro Football Hall of Fame, denied the NFL from interviewing Kliff Kingsbury or has Swann made matters worse?

Hypothetical: If Kliff Kingsbury doesn’t remain as USC offensive coordinator, what offense will the Trojans be running in 2019?

Hypothetical – Part 2: If Kingsbury heads to the NFL, will there still be an open quarterback competition in the spring?

The relief: Just how relieved were Trojan fans when All-World prep wide receivers Bru McCoy (Santa Ana, Calif./Mater Dei), who actually signed during the early signing period and kept it quiet until Saturday, and Kyle Ford (Orange, Calif./Lutheran) both announced on national television they would be attending USC during the All-American Bowl in San Antonio?

Timing: Not to take away a little of the excitement of the announcements of McCoy and Ford, but are the Trojans going to get some February signings from any quality offensive and defensive linemen?

Man of Steele: With DB Chris Steele (Bellflower, Calif./St. John Bosco) announcing at the All-American Game in San Antonio that he will be a Florida Gator, how will that affect the Trojans’ future secondary?

Still searching: Who will be the surprise recruiting signing come February that we don’t know about?

The big fella: Trojans’ early signee offensive tackle Jason Rodriguez (Oak Hills, Calif./Oak Hills) participated in Thursday’s Under Amour All-America Game in Orlando, Florida, but will he stay at tackle and or be moved to guard when he comes to Troy?

The question: So, did you really miss the Trojans not being in a lower tier bowl game?

The betting man: There seemed to be some confusion when it was announced that former safety Bubba Bolden had been reinstated into USC. Some folks thought it meant both a return to classes and back on the football team. Turns out Bolden’s reinstatement had nothing to do with the football team but was the young man’s option to attend spring classes along with a reopening of the original investigation. Well, if I was a betting man, it says here that Bubba Bolden will never play a down for the Trojans, and it’s questionable whether Bolden really wants to roll the dice and waste his gridiron future on a committee that has not looked favorably on athletes alleged misdeeds in the past. Innocent or not, would you really blame Bubba if he went in another direction?

Number changes: The comparison of the Trojans football program current redo and that of Notre Dame’s past redo, which resulted this season in the Irish’s eventual CFP spot in the semi-finals, deserves scrutiny. The Trojans dismissed three coaches while the Irish ushered in 17 new faces. From a Trojan fan’s point of view, would you call the Trojans moves a true program makeover?

The update: Have you been distracted with all the Trojans coaching and recruiting happenings that you’ve forgotten about the ongoing Coliseum renovation? Here’s the latest real time camera view on the Coliseum renovation project: https://app.oxblue.com/open/usc/lacoliseumrenovation

The last word: My nephew, Mikey, called me from San Francisco where he lives and works, to tell me how excited he was that he and his girlfriend would be attending Monday night’s CFP National Championship Game in Santa Clara. He said that ticket prices had really dropped and were affordable. Asked about who would win the game, I said it’s Alabama 34, Clemson 30. Roll Tide!