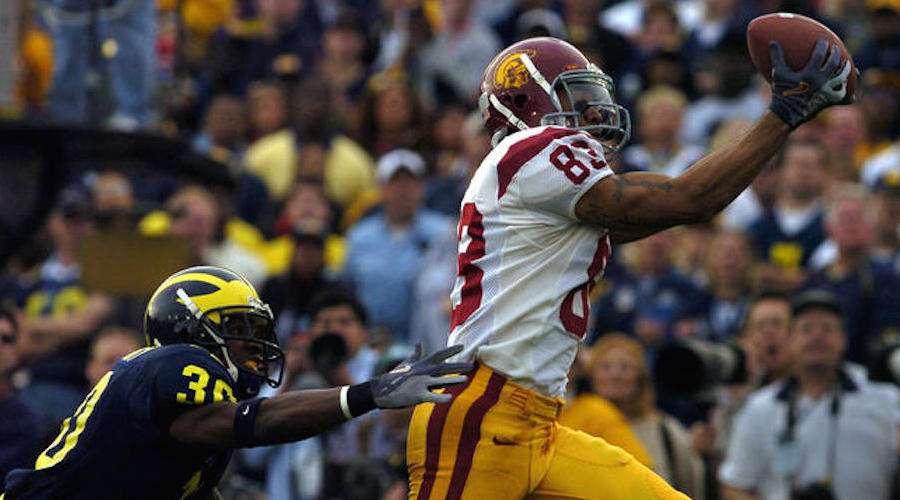 The return: According to numerous sources, former Trojans all-star wide receiver Keary Colbert (above photo), old No. 83, is returning to USC from his Alabama Crimson Tide job as offensive analyst to assume the same responsibility on Clay Helton’s staff. This is a great move by Clay Helton and will get a very popular public approval rating.

Inside info: With Keary Colbert’s expected return to Troy, he will obviously carry with him a vast knowledge of inside information regarding the Crimson Tide, whom the Trojans open the 2016 season. Oh, to be in those John McKay Center summer strategy meetings during Alabama prep.

If you recall: After being a vital member of the 2003 USC national champions that trounced Oklahoma in the BCS title game, Keary Colbert became a 2004 second round draft pick of the Carolina Panthers. Upon finishing his NFL career (Broncos, Seahawks, Lions, Chiefs), he eventually worked with the Trojans as a grad assistant wide receivers coach in 2010 and in 2013 became the Georgia State wide receivers coach.

Revelations: In a recent ESPN question and answer session with new Trojans offensive coordinator Tee Martin, Martin revealed the Trojans offense will (1) have new terminology because it’s “time for a change,” conference teams have caught up with the Trojans way of doing things (signals) on offense, former Trojans assistants have gone on to other conference teams (i.e. Marques Tuiasosopo – UCLA) (2) said the Trojans offense is pretty good when it’s not being penalized, lacking focus, and experiencing lack of execution, and (3) wants to “upgrade and enhance” the offense, and “there’s a lot of thoughts and things that we’re doing schematically that I’ve done at other places that we have not done here.”

IMHO: What stands out here in the aforementioned Martin comments is the dreaded term “lacking focus,” which usually politely translates into meaning not paying attention, concentrating, and being disciplined. You can hold the coaches accountable up to a point, but then it’s all on the player(s). Of course, there is always sitting players for lack of focus, and we may have seen that last season on various occasions.

Revelations – Part 2: Regarding the 2016 offense, Tee Martin told ESPN, “It’s not like we have to fix something that was broken. We have a pretty good thing going and we just want to upgrade it and enhance it.”

IMHO: Regarding Martin’s comments on the offensive system and wanting to “upgrade it and enhance it,” it translates here to mean that they were adequate with the Steve Sarkisian offensive system last season but were not entirely happy with it, which is like saying am not totally unhappy with my laptop, but I want to make it better or transition it to a new, higher model altogether.

Revelations – Part 3: Tee Martin went on to inform that a major strength of the offense coaching staff is the wide range of age and experience. Martin said, “I couldn’t ask for a better mixture of new thoughts, new ideas as well as 30 years’, 40 years’ experience in Tommie Robinson and Neil Callaway. We have a great balance of that. Myself and Tyson, we’re the same age. We’re the younger guys and then John Baxter and Neil Callaway and Tommie Robinson are the more experienced guys and they’ve been good everywhere they’ve been. And so it’s a great group of guys as a younger coach to learn from and work with and put a system together with.”

IMHO: On the surface of Martin’s comments that “I couldn’t ask for a better mixture of new thoughts, new ideas as well as 30 years’, 40 years’ experience in Tommie Robinson and Neil Callaway. We have a great balance of that,” you have to be encouraged that Martin understands there is much to learn and gain from the “old folks” on the staff.

Revelations – Part 4: Tee Martin also added regarding the interaction of the new offensive staff, “We’ve all had thoughts and shared input in a way that we’ve redesigned our system.”

IMHO: Martin’s “redesign of the system” comment is probably the most intriguing statement about the offense leading into spring practice.

Sign of the times: Former Trojans linebacker Su’a Cravens did not run a 40 time at the NFL combine in Indianapolis, saying that he’ll show his stuff at the USC Pro Day. In other words, he’s still working hard with trainers to enhance his time.

USC Pro Day: Su’a Cravens and other Trojans looking for a spot in the NFL will show their stuff on the USC campus on March 23. In many ways, Pro Day on the USC campus is a warm and fuzzy comfort level to execute a peak performance as opposed to the high-pressure environment of the NFL Combine in Indianapolis.

The feeding frenzy: I believe in honor of Jim Harbaugh taking his Michigan team down to Florida for Spring Break to showcase his team and program in the Southeast, it would be appropriate to have Clay Helton take his Trojans for Spring Break up to Ann Arbor to fill the void of not having the Wolverines in town and to showcase his cardinal and gold program in the Midwest.

Don’t turn the other cheek: As predictable as it was, it’s no shock that the SEC and the ACC are trying to get NCAA legislation passed so that Jim Harbaugh and anybody else doesn’t come to the Southeast to exhibit their programs and become a recruiting threat.

Been there, done that: The Jim Harbaugh uproar is reminiscent of the time when the SEC successfully got the NCAA to pass a rule that prohibited head college coaches to recruit off campus during high school spring practices. It was originally all done to keep former Trojans head coach Pete Carroll from poaching yet another player out of the Southeast.

The beef: Today’s Sunday morning and post-noontime sessions for the Nike sponsored The Opening Los Angeles Regional at Redondo Beach High are always a good way to start the new cycle of recruiting analysis.

The matchup: There are several talent matchups on Sunday that these eyes are looking forward to watching at The Opening Los Angeles Regional. The first one that comes to mind is gifted Bellflower (Calif.) St. John Bosco offensive tackle Wyatt Davis and Las Vegas Bishop Gorman defensive tackle Haskell Garrett, who is currently committed to Ohio State.

For the record: Wyatt Davis reportedly checks in at 6-feet-5 and 290 pounds while Haskell Garrett stands 6-feet-3 and weights 290 pounds.

Still the one: Certainly one of the most inspected players will be Las Vegas Bishop Gorman quarterback Tate Martell, who is currently committed to Texas A&M.

The eyes have it: Many recruiting onlookers at Redondo Beach High will be taking a special look at Trojans Class of 2018 quarterback commit Matt Corral, the wunderkind signal caller from Westlake Village (Calif.) Oaks Christian High.

Inside info: The camp is open to coaches of all levels, as well as fans who want to learn more about the USC football staff and its coaching philosophy. This sure sounds like a chance to get the real inside on what is in store for next season. With a certain question and answer session, it would appear that coaches and fans could get their questions answered directly from the coaches.

Welcome home: One of the guest speakers at the USC Football Coaching Clinic will be Los Angeles Rams head coach and former USC corner Jeff Fisher.

Front row seats: For those that have the time and money to attend the clinics, part of the perks will include attendance at the Trojans spring football practice on April 2 on Howard Jones Field.

Cost of tuition: For those desiring to go to the USC Football Coaches Clinic, cost of the two-day clinic is $80 ($65 for a single day). The clinic offers a staff discount of $15 off per person for groups of five or more who pre-register together for both days. Hey, I say bring your buddies and enjoy the information and education.

The registration: Online registration for the USC Football Coaches Clinic is available at www.FIGHTONCAMPS.com. Links to a clinic brochure and registration form are attached. For more information, email Eloy Ledesma at [email protected]

The last word: If there were a need for a quarterback coach or offensive coordinator with the Seattle Seahawks, would Pete Carroll hire Steve Sarkisian if available?