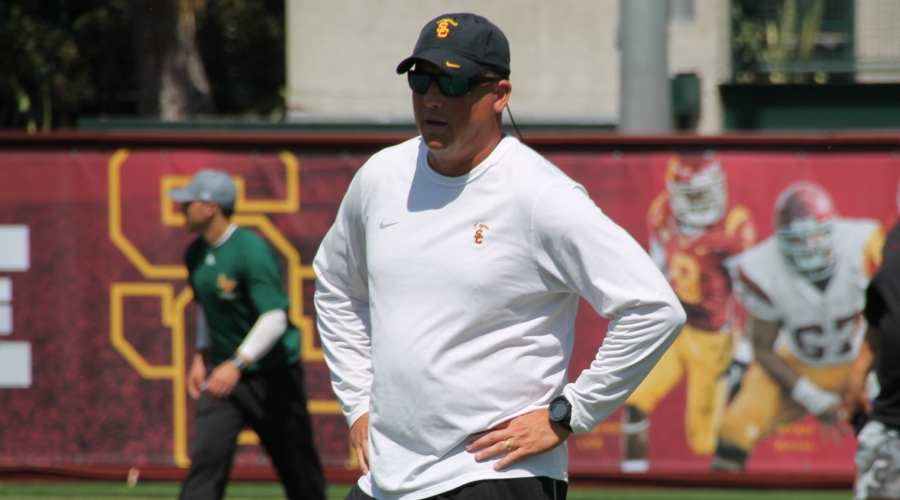 The delegator: Trojans head coach Steve Sarkisian said on Saturday that offensive coordinator and quarterback coach Clay Helton (above photo) would call the base plays beginning with Arkansas State, but Sark said he would “chime in” and have input “on third down and red-zone scenarios.” Give the head coach plenty of credit for handing off the main play-calling responsibility to Helton, and suddenly the season opener on Saturday night against the Red Wolves takes on a whole new and intriguing storyline.

The delegator – Part 2: In turning the basic keys to the Trojans offense engine over to Clay Helton, it should remind Trojans fans how effective Helton was in calling plays in the 2013 Las Vegas Bowl, a 42-20 victory over Fresno State. And don’t forget that Cody Kessler was Helton’s QB in the Las Vegas Bowl.

The delegator – Part 3: According to Sark, giving Clay Helton play calling responsibility will allow him to focus not only on being a “really being a good head coach,” but it will also allow him to spend more time with the defense and game management. For the record, Sark looked both relieved, relaxed, and happy during his press conference on Saturday in announcing the transitions, which he says actually began in the spring.

The delegator – Part 4: Being as honest as he has ever been, Sark said Saturday it does him no good as a play caller to set offensive records and have his team “finish 8-5 or 9-4.” He says he wants to win 13 to 14 games. Apparently Sarkisian is in agreement that a “total success” at USC is not 9-4, so give him kudos for making that public acknowledgment.

Madden 2015: Not surprisingly, Sark has named senior Tre Madden as the starting tailback against Arkansas State. If the tough running Madden can stay healthy, he could be one of the big success stories on the West Coast.

Toa truck: Now that he has been medically cleared, it’s still uncertain if Chad Wheeler will start at left tackle against Arkansas State. By his own admission, Chad says he needs to get into better game shape. The key, of course, is if Wheeler does start, where will we see Toa Lobendahn, who was only a Freshman All-America last season? The answer could come quickly during Tuesday and Wednesday’s practices, which are open only to the media.

The waiting game: Can’t wait to see when Steve Sarkisian puts in sophomore quarterback Max Browne against Arkansas State, and whether Sark will give Clay Helton the green light to allow Max to throw the ball down field. Don’t forget that Helton was the lead recruiter for Browne when the tall and talented quarterback was the real deal at Sammamish (Wash.) Skyline.

Just for kicks: Sark has named junior Alex Wood as the starter for kickoffs and placekicking duties over sophomore Matt Boermeester. Wood could have as much say as anybody on how successful the Trojans will be in terms of wins and losses. Sark also said that he expects Boermeester to get some opportunities during the season.

The Red Wolves: If you are the Arkansas State coaching staff, are you more than a little concerned about what kind of an emotional USC team you will be facing next Saturday night? Being it’s the season opener, expectations should be for a very inspired USC team to be ready to go.

The Red Wolves – Part 2: With the announcement that Clay Helton will call a majority of the offense, do you think that the Arkansas State coaching staff will be checking out the 2013 Las Vegas Bowl tape?

Mapquest: And how many Trojans fans even know what city Arkansas State is located. Here’s a hint: What is the last name of that famous Steven Spielberg adventure hero whose first name is Indiana? Okay, combine that with this fill in the blank: He lives in the ______________ of Brooklyn, New York. I know, it’s not spelled the same but it sounds the same.

Center of attention: Having gone almost unnoticed is the backup center position for senior All-Pac-12 center and captain Max Tuerk. At the moment, it appears that sophomore Khaliel Rodgers is Max’s understudy.

Damage control: The true measurement of any damage – if any – created by Steve Sarkisian after the Salute to Troy episode will be best measured on how it affects recruiting and so far no damage to report at all.

The walk-on: He’s doing it again and now that he’s healthy we’re talking about redshirt junior wide receiver Christian Tober, who hails from the same high school, San Clemente, as freshman quarterback phenom Sam Darnold. Tober, the little mighty mite (5-8, 175), can play and will showcase his underrated skills this season as both a receiver and return artist.

More Tober: In Saturday’s post-practice press conference with the new team captains, when assessing the offense and the wide receivers in particular, quarterback Cody Kessler gave special mention to wide receiver Christian Tober. Kessler said, “Another guy, Christian Tober, he’s has been really working hard, too. Even though he’s a walk-on, he’s been playing really well.”

Home sweet home: Steve Sarkisian admitted that true freshman running back sensation Ronald Jones ll has been challenged by a case of homesickness but has rallied and come back strong. According to Sark, Jones, who hails from McKinney, Texas, is no different than many other out-of-staters. The head coach used the example of former All-American wide receiver Dwayne Jarrett who felt the homesick urge to return home but didn’t at his mother’s rejected the idea.

The chosen: Saturday, the Trojans announced the 2015 team captains: QB Cody Kessler, C Max Tuerk, LB Su’a Cravens, LB Anthony Sarao and DT Antwaun Woods. All are excellent choses in the their own way, all five players should provide the type of leadership needed in good and challenging times. If character counts, these Trojans have it.

Semester quarter: Steve Sarkisian believes there are pros and cons to being on the academic semester system at USC. The coach says the semester system starts in August, so the players don’t have to make such a big adjustment in time management as opposed to schools like the University of Washington that are on the quarter system, which begins school in late September.

Quarter system challenge: Sark says schools on the quarter system are strictly in fulltime football time management until school starts, which is good, but those players are challenged a third into the season when they have to get back into a ridged school/athletic time schedule. Sarkisian found that there is a big adjustment for players on the quarter system, but says both academic calendars have their plusses and minuses.

Herbie Awards: ESPN college football broadcasting icon Kirk Herbstreit published his preseason Herbie Awards this past week and a couple of Trojans were nominated in various categories. Linebacker Su’a Cravens was nominated in the “Enforcer” category and receiver JuJu Smith-Schuster for “Most Exciting Player.”

The last word: Okay, so Arkansas State isn’t exactly Ohio State or Notre Dame in star appeal, but there’s nothing like the first game of the season and if you can’t get excited for that, well you might as well watch it on TV. Oh, that’s right, for many the official announcement that Direct TV will telecast the Pac-12 Network has not been released. Rumor is the announcement will be made this week in time for viewing this week’s conference teams in action.