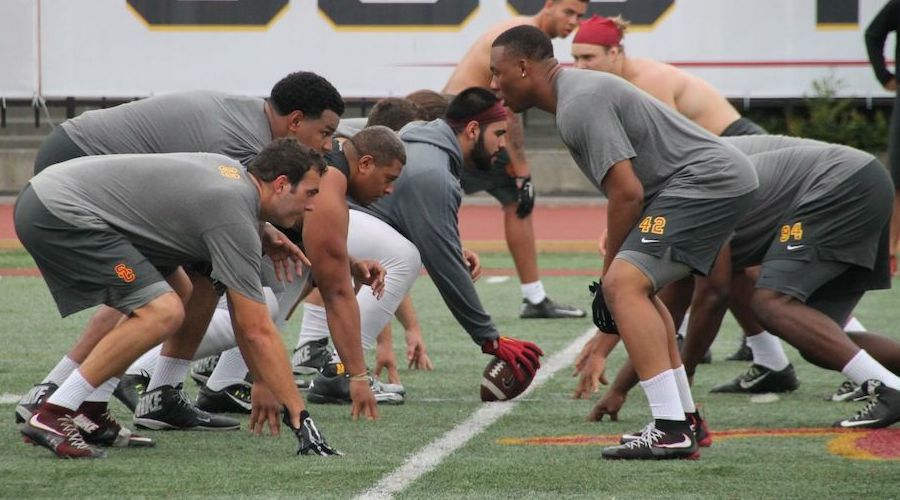 Timing is everything: It was refreshing to officially hear that regular fall Trojans practices will be at 4 p.m., and that should be a big help for the Trojan football players’ biorhythms that were subjected to early morning practices and then subjected to playing weekend games in the late afternoon or evening.

Timing is everything – Part 2: For the record, three of the Trojans first four games this season start at 5 p.m. PDT or later body time with the one exception – the 11 a.m. PDT kickoff against Utah State in the Coliseum on Sept. 10.

Timing is everything – Part 3: Although there are still seven kickoff times yet to be announced, you can bet that most if not all those kickoffs will be no earlier than 3:30 p.m. PT. The Thursday night game against Cal in the Coliseum on Oct. 27 will kickoff at 7:30 p.m. PT (ESPN).

Here we go again: You know the old Al Pacino Godfather line in which Michael Corleone says every time he tries to divest himself of his mafia family business, he gets pulled back in? Well, every time we try to move on regarding changes to the flawless Trojans football uniforms, the sponsoring shoe company comes along and proposes new changes. And this football season, the shoe company was finally given the green light on some “minor” touches.

Here we go again – Part 2: If you still haven’t seen the video regarding the new uniform changes – which has garnered an array of pro and con opinions – rather than write about it, here you go and decide for yourself:https://www.youtube.com/watch?v=QFriQBBUm_4

Here we go again – Part 3: I am all for good ventilation and a good uniform fit for athletes, but change for the sake of change – especially to these already iconic USC uniforms – is a little over the top for me. Seriously, will anybody really notice the new “Trojans key pattern” around the collar? Nobody will see the “Fight On” marquee on the inside back collar. The addition of the thick cardinal around the collar of the white visitors uniforms with the cardinal trim on the sleeves is overkill, IMHO. And the change in the way the numbers are designed will largely go unnoticed.

Here we go again – Part 4: As Clay Helton would echo, the truth is the most important things in the Trojans football program remain “just win, baby” and preserve the great tradition.

IMHO: Okay, so maybe I am overreacting and it’s much ado about nothing as it pertains to uniform change, but that Nike phrase “ Respect the past but represent the future” sounds like a carefully orchestrated justification to get the green light for uniform modification. And does anybody think that the new uniform designs won’t make its way into the USC Bookstore and retail stores?

The role model: Former Trojans All-America defensive tackle Leonard “Big Cat” Williams was part of last week’s players’ workouts and was wearing a USC football T-shirt rather than New York Jets attire. The Big Cat’s participation again sends such a positive message to those returning and future Trojans that you’re a Trojan for life.

No brainer: After TV rating went down significantly from the initial first year, the College Football Playoff is strongly considering in the future not playing its semi-final games on New Year’s Eve. Shocking! Even ESPN, which televises the games, originally requested the CFP not to hold the playoffs on New Year’s Eve, but the college establishment rejected that idea. The CPL’s front man, Bill Hancock, says the main goal is to get as many people as possible to watch the playoffs, so the eventual move appears imminent, although it can’t happen until after the 2018 season.

No brainer – Part 2: The Rose Bowl will again host a CFP semi-final on Jan 1 of 2018, so you can pretty figure out the ramifications for the Trojans. And while on the topic of the CFP, when are we going to expand to an 8-team playoff, which would be just perfect on so many levels?

Save the date: For those wondering, Salute to Troy, that evening of cardinal and gold celebration, 2016 player introductions, music, and buffet intake, will take place on Friday, Aug. 19. The Trojans will practice beforehand (3 p.m.) and Salute to Troy will begin at 6 p.m.

Anniversaries: The 2016 season marks the anniversary of three USC Rose Bowl teams. It’s the 50th anniversary of the 1966 team that lost a Pasadena heartbreaker to Purdue, 14-13, on a Trojans failed two-point conversion near the end of the game.

Anniversaries –Part 2: It’s also the 40th anniversary of the 1976 Rose Bowl team, which was coach John Robinson’s first season as Trojans head football coach. The Trojans beat No. 2 Michigan (14-6) in the bowl and ended up No. 2 in the country. Robinson’s men finished the season 11-1. The only loss was a shocking season opener to Missouri, 46-25, in the Coliseum.

Anniversaries – Part 3: And last but not least, it’s the 10th anniversary of Pete Carroll’s 2006 Rose Bowl team, which dominated No. 3 Michigan, 32-18, in the Granddaddy of Them All.

The nightmare: Although it’s all hypothetical and questionable if it would even happen, but if Max Browne isn’t named the starter for 2016, could he technically transfer out of Troy and be on the roster for Alabama when the Trojans open with The Tide? Ya think that former Trojans head coach Lane Kiffin wouldn’t jump at the opportunity to snatch Max? Does Alabama wear crimson and white?

The broadcaster: As we learned in Johnny Curren’s WeAreSC piece on defensive tackle recruit Marvin Wilson (Bellaire, TX)/Episcopal) – voted the top defensive linemen at The Opening – one of the key components in Wilson’s recruiting is that the man-child wants to eventually work his way into broadcast journalism. Based on the other schools he is considering (Alabama, LSU, Florida State, Ohio State, Oklahoma, Texas, Texas A&M, and UCLA), USC is at the forefront when it comes to broadcast journalism.

The broadcaster – Part 2: The opinion here is that Marvin Wilson has major interest in the Trojans, and if he does bring his mother on an unofficial visit later this month to Troy, you’ve got to have a good feeling about this kid’s recruitment.

Traveler: If you’re vacationing this upcoming week in the Deep South and want to get into the College Football Hall of Fame in Atlanta for free, next Saturday, July 23, all fans showing up in costume as their favorite college mascot get FREE admission. Guests must arrive in costume to the box office to receive free entry. Okay, somebody find my Traveler costume and no horsing around.

More HOF: Another College Football Hall of Fame promotion will be on August 13 when there is a celebration of famous college football left-handed quarterbacks. Entitled “National Lefthanders Day,” the Hall says it would be celebrating lefty Hall of Famers “like Steve Young, Frankie Albert and Terry Baker.” Fans get $5 off their ticket by completing an outdoor QB challenge with only their left hand. I know what you’re thinking: What about legendary Trojans quarterback Matt Leinart? Well, the celebration is for those lefties already in the College Football Hall of Fame and Matt is still waiting his turn for election.

The Irish schedule: Notre Dame recently announced it’s renewing its rivalry with Michigan and has scheduled games with the Wolverines for the 2018 and 2019 seasons. After Notre Dame hosts Michigan in the 2018 season opener, the Irish will travel to Ann Harbor in 2019 to play the UM on Oct. 26, and the week before that travel to play at Georgia Tech on Oct. 19. Normally, when the Trojans travel back to South Bend, the game with the Irish is played on the third Saturday in October. Obviously the Irish will be at Georgia Tech that weekend. So what gives?

The Irish schedule – Part 2: According to future ND schedules, the 2019 season there are currently two open dates in October (5 and 12). You’d think the Trojans would play at Notre Dame on Oct. 12, a week earlier than usual. As of now, those open October dates are listed by Notre Dame as “TBD” (to be determined). Stay tuned.

ACC influence: The reason for Trojans will probably playing the Irish a week earlier in October of 2019 is that the Irish schedule is affected by their affiliation with the ACC, which has announced its future conference football schedules.

The last word: And if you’re wondering when the Trojans will unveil their “new” white road uniforms, the Trojans have been named the visiting team for their showdown with Alabama on Sept. 3 in AT&T Stadium in Arlington, Texas.