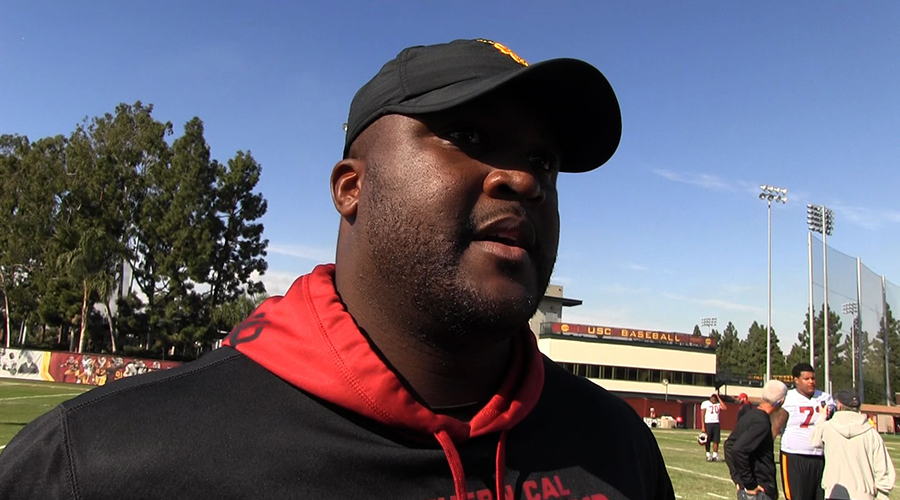 On the Tee: Well, this was kind of a no-brainer in promoting Tee Martin to offensive coordinator. Only time will tell if it was the right choice by head coach Clay Helton, but the good news is that Helton has worked with Martin long enough to feel comfortable with him in his new job description. Helton will call plays for the National Funding Holiday Bowl while Martin will handle all the play calling duties beginning with Alabama in 2016.

On the Tee – Part 2: What’s really interesting is how Tee Martin’s promotion affects recruiting, as it pertains to his son, Amari Rodgers, who recently decommitted from the Trojans and appears to be favoring Clemson at the moment.

Calling Sherlock Holmes: One of the unsolved mysteries in the Trojans football program is just who will Helton select as his defensive coordinator, which probably affects the balance of the defensive staff. As hinted by Helton on Saturday, the “lots” of candidates come from teams currently in bowls and potential NFL playoff teams. If I were a betting man, I would say that the final verdict on Clancy Pendergast will come after the 49ers season although I would be surprised if Clancy returns to Troy. It’s pretty much out there that Pendergast does not like recruiting.

Calling Sherlock Holmes – Part 2: Because he is from Southern California – specifically Redlands and Redlands High (1994) where he played and coached, I would also say, there is just something that makes me think that Wisconsin defensive coordinator David Christopher Aranda is right there, especially Helton’s comment that some DC candidates are still in bowl games Hmmm. When a coach like Aranda, who grew up in the Inland Empire has a golden opportunity in a window of now-or-never opportunity, the timing couldn’t be better.

Goodbye and good luck: The announcement by Trojans All-Pac-12 junior linebacker Su’a Cravens to the NFL wasn’t unexpected by any means. He certainly has demonstrated that he is ready to go to the next level. Aside from his obvious playing abilities, he will be greatly missed next season because of his leadership attributes and his ability to tell it like it is – win or lose.

Positioning arrangement: The intriguing aspect of the Su’a Cravens announcement is the fact that most believe that he will be returned to a strong safety position in the NFL. In mock drafts, he is a somewhat late pick and one of the teams being projected as a suitor is the Green Bay Packers.

Packers Trojans: If Su’a Cravens is eventually drafted by the Packers, he would join former Trojans Clay Matthews and Nick Perry, both linebackers for Green Bay.

Helton backing: According to L.A. Times, Trojans head coach Clay Helton strongly supported Su’a Cravens decision and knew it was his star linebackers time to say “adios.” Helton told Cravens, “If you said no (to entering the draft), I was packing your bags for you.”

Welcome back and good luck: In a move that looked at the time that could go either way, All-Pac-12 offensive right tackle Zach Banner has elected to play another season for the Trojans. IMHO, it was the correct move for the emotional and gregarious Banner, who could have find his way to an All-America season if he continues his improvement.

More Banner: Seeing Zach Banner in the locker room after the Trojans emotional loss to Stanford in the Pac-12 title game, there was a sense he might return because he mentioned seeing all those All-America plaques that reside on the runway of the Trojans locker room. Banner made no bones about it that he has dreamt of seeing himself on that imposing wall.

Maddening: It’s a crying shame that senior running back Tre Madden’s career ended with knee surgery last Monday. The positive is that Clay Helton said on Saturday that Madden is happy with the success of the surgery. We wish this star-crossed tailback the best.

Tackling the issue: As has been reported, starting offensive left tackle Chad Wheeler was taken by police on Saturday morning for an alleged incident in which he was punching walls and windows in an apartment complex. There are still details to be sorted out, but it certainly doesn’t sound good. One wonders how much damage there is to Chad’s hands, which would greatly affect his ability to perform. On Saturday, the Trojans practiced with Zach Banner at left tackle and freshman Chuma Edoga at right tackle.

Road team advantage: The Trojans have been designated as the visiting team for the National Fund Holiday Bowl meaning the Men of Troy will be wear their white jerseys while Wisconsin will wear their home red jerseys.

The reappearance: According to a number of sources, former Trojans defensive line coach Chris Wilson has been hired in the same capacity at the University of Missouri. Interesting to say the least.

2016 schedule-maker: Whoa, if you’ve seen the teams and schedule order for the Trojans next season, that’s one hellacious parade of teams no matter how you interpret it.

Bring it on: Last season the Trojans played their first three games against Arkansas State, Idaho, and then mighty Stanford all at home. In 2016, the Trojans will open with potential national champion Alabama (Arlington, Texas) followed by a home game with Utah State, and then back on the road at Stanford. Need we say more?

The encore: If you thought two of the first three games of 2016 were challenging, the Trojans will the close the 2016 season at UCLA and then host Notre Dame in the season finale.

StubHub thermometer: The latest check of ticket ranges at StubHub for the Holiday Bowl reads a low of $65 (upper Plaza Corner) and a high of $300 (View Sideline).

FWIW- Stanford’s 2015 Outland Trophy winning offensive guard Josh Garnett is the son of former Washington Huskies defensive tackle Scott Garnett, who played his prep ball at Pasadena Muir High, which is a stone’s throw from the Rose Bowl. Way back when, the Trojans were heavily trying to recruit Scott to play at USC. In hindsight, there’s one former lost recruit that still came back in the form of his son to haunt the Men of Troy.

Luncheon change: Last season’s Holiday Bowl teams luncheon was held on an aircraft carrier in the San Diego Navy shipyard. This season’s National Funding Holiday Bowl Kickoff luncheon will be held at the Hilton San Diego Bayfront, which is across the railroad tracks from Petco Park. I have stayed at the Bayfront Hilton and it gets a huge thumbs-up from me. Maybe it was that 15-floor view of Coronado that blew me away.

Selling tickets: The Trojans still have Holiday Bowl tickets for sale to the general public and the seats are in “USC sections.” The price ranges include $80, $85, $95, and $105. Contact the ticket department on campus to make your purchase.

Parking sharks: Many Trojans fans will take public transportation to get to the National Funding Holiday Bowl at Qualcomm Stadium and avoid the parking cost and the inconvenience of getting out of the stadium after a late night kickoff time of 7:30 p.m. PT. FYI, you might want to know that parking for the 2016 Rose Bowl Game is now $40 per car. Yikes!!!!

The comparison: The lowest price of an over the counter Rose Bowl ticket for this season’s game is $150 while the highest price ticket for the National Funding Holiday Bowl is listed as $145.

The last word: You might want to buy that special somebody a super warm overcoat for Christmas if you’re planning attending the National Funding Holiday Bowl, which should have the big chill of the winter with the 7:30 p.m. PT kickoff. Last season’s Holiday Bowl between the Trojans and Nebraska was a 5 p.m. start and by the time the game ended, it was as cold as a freezer.