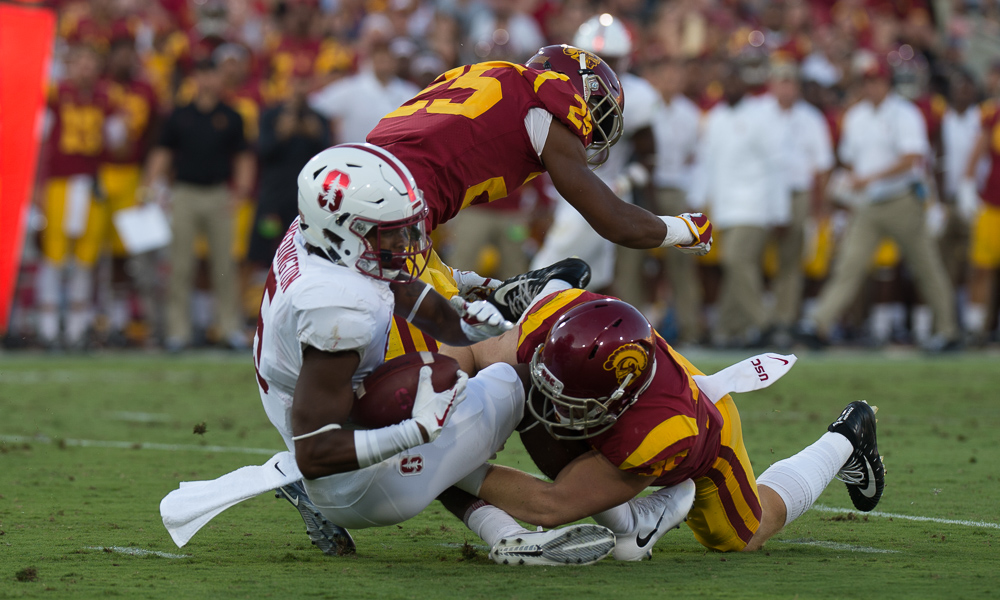 Memory jogging: In case you might have forgotten the details of the Trojans’ 42-24 rout over Stanford back on Sept 9 in the Coliseum, the Men of Troy piled up 623 total offense yards behind a 316-yard passing day by quarterback Sam Darnold. Sam was supported on the ground by tailbacks Stephen Carr (119 yds.) and Ronald Jones ll (116 yds.) while the Trojans’ defense held Stanford to just 342 yards in total offense. Stanford’s superstar tailback Bryce Love, however, rushed for 160 yards (17 carries) against the Trojans, including an electrifying 76-yard TD jaunt in the first quarter.

The comparison game: On Saturday night, Stanford, scoring three touchdowns in the final quarter, throttled Notre Dame for a 38-20 victory over the Irish at Stanford Stadium, which should get the immediate attention of Trojan fans.  Cardinal and Gold fans are still trying to forget the Irish destroying the Trojans, 49-14, at Notre Dame Stadium back on Oct. 21. So, which team, USC or Stanford, has improved the most since the two last faced each other? BTW, Stanford tailback Bryce Love, despite a nagging high-ankle sprain, still ran for an impressive 125 yards on 20 carries (6.3 avg.) against the Irish.

The Shaw speaks: After Saturday night’s convincing upset of Notre Dame and speaking to his team’s early season losses to the Trojans and San Diego State, Stanford head coach David Shaw said, “We sat here 1-and-2 with a lot of doubt, and some of it was internal. We had to ask ourselves a lot of questions. We talked about not worrying about anything other than playing our style of football. We had to go back and be who we are. To go from 1-2 to winning eight of nine and getting back to the Pac-12 championship game says a lot about our players.”

The Shaw speaks – Part 2: Knowing his team has a short week to prepare for the reinvigorated Trojans, who are coming off a bye week, David Shaw said, “We’ve got to find a way to rest and prepare for a very good football team in USC. We have six days to try to find a way to beat a good USC team.”

Progress: Contrary to the media and public viewpoint, Trojans head coach Clay Helton, who has not won a Pac-12 Conference title in his two previous seasons as USC head coach, said recently that there has been progress this season because the 2017 Trojans won the Pac-12 South Division while last season – despite the rousing Rose Bowl finish – did not win the 2016 Pac-12 South.

Validation: Confirmation of Clay Helton’s viewpoint on his team’s progress will be whether his men can make it two in a row against Stanford and do it in the biggest game of the season, the Pac-12 Championship Game. A win on Friday night and Helton will be smiling ear-to-ear. A Trojans’ loss in the rematch with Stanford would reignite discussion regarding the Trojans’ football future and likely Helton’s, as well.

Swann song: Nobody, and I mean nobody, will be scrutinizing Clay Helton and his staff’s performance in this Friday night’s Pac-12 Championship Game any more than Trojans’ athletic director Lynn Swann. The Trojans’ legendary former All-America receiver certainly has his private thoughts regarding how much the Trojans have improved this season and how it relates to the future of USC football, which could get dicey when combined with the planned 2019 reopening of an already controversial Coliseum renovation and the unavoidable comparisons with recently hired UCLA head coach Chip Kelly.

Happy camper: Nobody in Pac-12 land can be any more euphoric with the USC/Stanford championship matchup than Larry Scott, Pac-12 commissioner, who likely envisions active Levi’s Stadium turnstiles on Friday night. Considering the Trojans have a traditionally active traveling fan base and the game is basically being played in Stanford’s own backyard (17 miles from Stanford Stadium to Levi’s Stadium), Scott is hoping it all plays well for a national TV audience.

IMHO: I doubt the Big Ten or the SEC would allow their conference championship game to be played on an early Friday night, especially if high school playoffs were in the semi-final or championship rounds.

Questions and Answers: While some may wonder what type of coach Clay Helton will be once Sam Darnold departs for the NFL, you can’t argue with the current facts that under Helton the Trojan are 16-0 at the Coliseum and 3-0 against UCLA. Helton can also achieve a conference first if his South Division champion Trojans can beat North Division champs Stanford. The South Division is currently 0-6 against the North in championship game competition.

Flights: Even though the Trojans had clinched the Pac-12 South Division championship prior to the UCLA game, “preferred” flight times and reasonable fares in and out of Santa Clara for the Pac-12 Championship Game became limited only after the Trojans’ victory over the Bruins. Apparently, many Trojans fans might have some hesitation about going up north if the Cardinal and Gold had lost to the Bruins.

Planning ahead: The truth is that if you stay in Santa Clara for the Pac-12 Championship Game, there isn’t much to do in the area unless you want to visit the Great America Amusement Park or make the long drive into San Francisco.

City by the Bay: Then again, if you want to spend a long weekend in San Francisco and then drive down to Santa Clara, good luck with navigating the horrendous Friday afternoon traffic, which could take up to two hours to get down to Levi’s Stadium. You want stress for a 5 p.m. kickoff?

Job opening: How about ASU firing head coach Todd Graham on Sunday morning despite the Sun Devils finishing second in the Pac-12 South and headed for a bowl game? The Pac-12 South should be mighty interesting in 2018 with at least two new head coaching additions.

The last word: See ya up in Santa Clara!