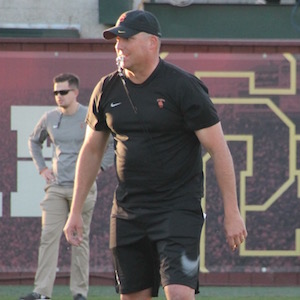 Friday review: Although the competition is realistically in the early stages, if you watched Friday’s Trojan practice, one could argue that the two inexperienced competing quarterbacks, sophomore Matt Fink and redshirt freshman Jack Sears, were either efficient and progressing or neither exuded observer confidence that they’ll be the answer come fall. After completing some nice passes at the outset, Fink proceeded to fumble a snap and threw an interception to nickel back Ajene Harris. As for quarterback Sears, he, too, made some good decisions but then proceeded to contribute to what appeared to be a mangled option play with walk-on running back Chris Edmondson, which was preceded earlier by a fumbled snap by Jack. Yet, on another play, Sears did his best Sam Darnold impression by running out of the pocket for an impressive gain. Of course, it didn’t help either quarterback when the Trojans young and inexperienced centers were consistently inconsistent in their snaps back their signal callers. Yet, despite the various miscues, head coach Clay Helton (photo above) thought his quarterbacks did a “nice job.” In the end, it was all a matter of interpretation and way too early to make any final judgement.

Friday review – Part 2: A nice offensive surprise on Friday was the running of senior Aca’Cedric Ware, who continues to give credence to Clay Helton’s comparison to former Trojans’ tailback standout Justin Davis. Ware ran with Davis-like physicality and unveiled some impressive cuts. Another improving offensive surprise is the emergence of redshirt sophomore wide receiver Josh Imatorbhebhe, who could be an early candidate for one of the spring’s most improved players.

Friday review – Part 3: Again, maybe it’s still way too early in the process, but the Trojans still do not look physical along the offensive line, but you could perhaps interpret that as kudos to a defensive line that look primed and ready to attack. Then again, it could be the offensive scheme that lends to this question: Are the Trojans trying to be a power running team or a physical running team or are they one in the same? With an experienced nose tackle in super-strong sophomore Brandon Pili and the emerging presence of JC transfer defensive tackle Caleb Tremblay, there’s additional promise in standout linebackers like senior Cameron Smith and young secondary talent that was impressive. While the secondary appears loaded with athletes, again it was super true freshman safety Hufanga Talanoa who looked very quick, super aggressive, a motor that doesn’t turn off, all complimented by great football instincts.

Oy veh: One of the more lighthearted moments during Friday’s practice was during a 7-on-7 passing drill, quarterback Matt Fink attempted to throw the ball over the middle and hit center Toa Lobendahn in the back of his helmet. Lobendahn, who is being held out of contact to protect his sensitive knees, must have thought, “Here I am in a non-contact drill for safety purposes, and I still get whacked in the back of my head.”

Man’s game: Trojan fans didn’t like the way that Ohio State’s defensive front 7 handled the Trojans offensive line in the Cotton Bowl loss, but starting offensive guard Andrew Vorhees believes there was a lot learned. According to Vorhees, “I learned we’ve got a lot to improve on; they’re a great team that’s well respected across the country. We were excited for the opportunity to play them. We’ve got to be a more physical team I guess, me particularly but the rest of the team, as well. There was a lot of constructive feedback from that game.”

Man’s game – Part 2: The Trojans are putting an emphasis on being more physical after their Ohio State lesson, but how do they do that? Andrew Vorhees gave it some thought and said, “It means being more physical I guess. It’s definitely a mentality, I’d say. I don’t think it’s a strength problem because we have one of the great strength programs, but I think it’s definitely mentality. The sport of football is at least 90% mental and then physical. The game of football revolves around us linemen. I see that when the offensive line steps up and becomes physical and asserts dominance, the team follows along.”

Following greatness: The list of great USC offensive lineman is legendary, and nobody knows that any better than Andrew Vorhees. Asked whether there is added pressure for the O-linemen knowing they’re following in some gigantic footsteps, the newly married lineman said, “When you have Anthony Munoz on the sideline at the Cotton Bowl, you definitely want to be physical and just be a dominator out there. It’s definitely a positive and driving factor.”

The return: Speaking of offensive linemen, it was great to see former Trojans’ All-America lineman Chad Wheeler walking the practice field wearing his New York Giants attire. With hair that looked a tad shorter than his long-haired playing days, Wheeler is that success story of a “upside, developmental player” coming out of high school who blossomed at USC, overcame a series of physical and emotional challenges, and made it to The League.

Welcome home: It was also great to see the incomparable LenDale White, one of Troy’s all-time tailbacks, at Friday’ practice. LenDale looked in great shape and had handshakes and hugs for all. In many ways, the opinionated running back has become sort of the Trojans’ version of outspoken Charles Barkley. The former No. 21 may say some controversial stuff, but no question his heart is pure cardinal and gold.

Welcome home – Part 2: If for some reason you have forgotten how great LenDale White was at Troy, you might enjoy some of his career highlights: https://www.youtube.com/watch?v=f0upVweo2_o

IMHO: Watching LenDale White run from the I-formation with Matt Leinart under center tells me just how drastic the Trojans’ offensive scheme has changed from the Pete Carroll era. You can come to your own conclusion regarding current USC “power football,” but I yearn for the good old days. If you experienced the Carroll era or the John McKay or first John Robinson era, you know what power football looks like and how it is executed. I would say currently the Trojans don’t come close to being a true power running team and will not be a serious contender for a national championship until they do, so help me Alabama.

Pro Day: Unfortunately, Trojans’ tailback Ronald Jones ll did not run a 40 time on Wednesday’s rainy morning festivities because of a tender hamstring, but it certainly didn’t hurt that Sam Darnold looked sharp even in the rain. However, it’s a bit ludicrous to believe that Sam connecting on pass routes to unguarded receivers in the rain superseded his work during the past two seasons under the microscope.

Foreshadowing: Sam Darnold has made no bones about it that he wouldn’t object to going to the Cleveland Browns. Browns owner Jimmy Haslem was observed sitting in the stands with Sam Darnold’s parents during the festivities. It wouldn’t be a stretch that despite meeting with the New York Giants for dinner, Sam believes he’s headed for Cleveland.

More welcomes: It was interesting to see former Trojans’ D-line coach Chris Wilson, the D-line coach for the NFL champs Eagles, directing drills during USC’s Pro Day. Well, you’re still a Trojan for life even if you’re no longer with the program, right?

More welcomes – Part 2: Although he has never really been away, it was comforting to see the likes of Trojans Heisman winning quarterback Matt Leinart in Pro Day attendance to add his support for Sam Darnold.

Reggie says: Former Trojans’ tailback Reggie Bush gave his opinion of the Sam Darnold/Josh Rosen comparisons on a TV interview this week, and it’s the opinion of the former No. 5 that Rosen is the better quarterback at this point in time. Bush was complimentary of Darnold and said he might turn out to be one of the greatest ever, but felt at this time that Rosen is “the complete package.” Because he is banned from campus to watch the Pro Day proceedings in person, Bush did his comparisons from a television studio.

In memory: One of the Trojan greats recently passed. Dr. Charles “Chuck” Arrobio, a 1965 Academic All-American offensive tackle and the university’s first-ever National Football Foundation Scholar-Athlete and NCAA Postgraduate Scholarship recipient, died last Sunday (March 18) after a prolonged illness in Pasadena (Calif.).  He was 73. We had the privilege of watching Chuck play and the former Glendale High stud was the epitome of an outstanding student-athlete who later went on to a brief career with the Minnesota Vikings before a knee injury cut short his career. Our thoughts are with his family.

In memory – Part 2: Saturday marked a memorial service for former Trojans’ All-America end Hal Bedsole. We also had the honor of watching Big Hal play two seasons at Troy and as said before, The Prince was the template of the big receivers that we now see wearing the cardinal and gold. Boy, was he great, and I don’t throw that word around loosely.

Traveling man: A number of Trojans did some pretty extensive traveling during spring break, and nobody did it any better than senior offensive lineman Jordan Austin, who crossed the Pacific and visited Japan.

Traveling man– Part 2: Traveling on his own and reflecting on his Japan experience, Austin said, “Ever since I was younger, I’ve always had an interest in (Japanese) culture, just from history classes. I wanted to experience something new and something that was completely different from the states. My undergrad was in international relations, and I never really had the opportunity to go abroad and get different perspectives until now.” And, yes, Jordan visited Disneyland Tokyo.

The last word: It’s common knowledge that the Trojans will not be having a spring game due to Coliseum renovation but instead will hold a glorified practice in Troy’ track and field stadium at noon on Saturday, April 14. In hindsight, would it not have been a better idea to have a spring game at the StubHub Center, home of the Chargers, or El Camino Community College, which has a fine facility? Of course, there are the dreaded optics of the spring game being held off campus and also being televised by the Pac-12 Networks. Come on, whoever remembers a spring game and where it’s played?