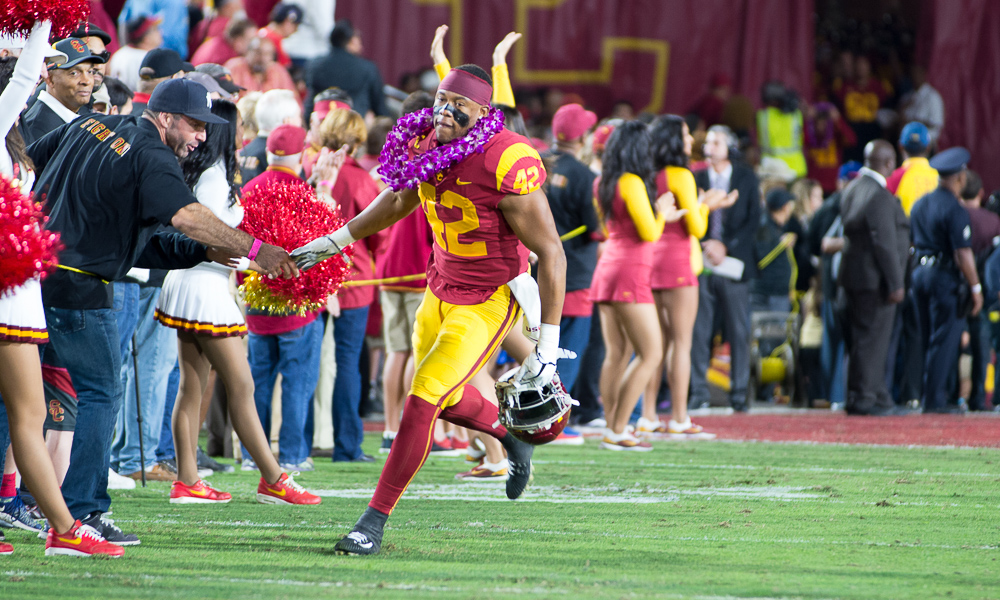 The comparisons: No doubt the New York City media will begin scrutiny of Jets No. 3 selection, former Trojans quarterback Sam Darnold, and former Jets No. 1 selection if 2009, former USC quarterback Mark Sanchez. If you want to start at the base comparisons, you could begin with the fact that both are from public high schools in South Orange County, California –  Mission Viejo HS (Sanchez) and San Clemente HS (Darnold), which not all that far apart.

No mercy: Regarding performing in the Big Apple, former Trojans and Jets quarterback QB Mark Sanchez has some words of advice for the family of Sam Darnold. In an article in Friday’s NY Post, Sanchez said, “I told his (Darnold) parents, ‘You guys have got to be his rock. After his big games and after the crappy ones, you guys have got to be there and strong for him, because New York is going to demand a lot from him — emotionally, physically, all that. I told them, ‘I guarantee he will get booed.’ It’s different than college. It’s a different atmosphere. It’s a different experience. I told Sam, ‘You’re going to love it, but understand that your life’s going to change.’’’

Musical advice: Being that Sam Darnold is a Southern California surfer kid, he might want to listen to the old Trade Winds song, “New York’s A Lonely Town,” when you’re the only surfer boy in town. Take a listen: https://www.youtube.com/watch?v=VRSe9fbzbFc

City by the Bay: No, not San Francisco but Tampa Bay, as the Buccaneers selected Trojans’ running back Ronald Jones lll in the second round and 48th pick overall of the draft. The Trojans have a historical connection with Tampa Bay, as the first draft pick in the Buccaneers’ history was late USC All-America tailback Ricky Bell, the No. 1 overall selection by The Bay in the 1977 draft. And for good measure, the first head coach of Tampa Bay directing that draft was the Trojans’ legendary coach John McKay.

City of Angels: And how’bout that Uchenna Nwosu, the Trojans’ former All-Pac-12 linebacker who made some history by becoming the first homegrown selection of the Los Angeles Chargers in the NFL draft. Picked as the second round and the 48th overall selection, what a great moment for the football program of local Harbor City Narbonne High. Go Gauchos!

Green machine: Also taken on Friday night was Trojans’ standout defensive lineman Rasheem Green, who was gobbled up in the third round and 79th overall selection by the green, blue, and silver of Pete Carroll’s Seattle Seahawks. Say, who says that the former Trojans’ head coach doesn’t draft cardinal and gold players?

The record holders: The Trojans retained their lead atop the most first-round picks (81), thanks to the selection of quarterback Sam Darnold by the Jets. For sure numbers, the greatest draft regardless of rounds came in the 1968 draft, a draft that followed John McKay’s second USC national championship in 1967.

The protest: Yeah, I know. It’s really unfair to hand the most drafted honors to the 1967 Trojans because the draft went into Round 17 as opposed to today’s NFL draft that stops after Round 7. Yes, times have certainly changed.

Still ticking: If you look at the above list of Trojans, three schools – Bishop Amat, Mater Dei, and Long Beach Poly still remain traditional pipelines for the cardinal and gold.

Not forgotten: Of all the Trojans drafted from the 1967 national champions, the best player – like all you oldies but goodies didn’t know – was All-America tailback O.J. Simpson, who was only a junior at the time.

Not forgotten: And your trivia question of the day: Who quarterbacked the 1967 Trojans?

The answer: The quarterback of the 1967 USC national champs was little Steve Sogge (5-10, 170), who was also an outstanding catcher on the Trojans’ baseball team. A shout-out to Steve’s high school alma mater, Gardena (Calif.) High School.

The replacement: Former Trojan QB Carson Palmer has retired as the Arizona Cardinal quarterback to be replaced now or in the future by former UCLA QB Josh Rosen. So how many times has a Bruin potentially replaced a Trojan or vice versa at the pro level?

The rankings: During the latter part of spring ball, media members ranked the favorite saying or comments of likeable head coach Clay Helton. At the end of spring ball, the comment ranked were (1) “I am a quarterback coach by trade” (2) “We won’t know until there are live bullets out there” (3) “It makes the hair on the back of my neck stand up” (4) Anytime referring to his lovely wife, Clay will lead with “Ms. Angela.”

The Silver Fox: Legendary coach John McKay also had his favorite lines. My personal favorites when referring to the number of times legendary tailback O.J. Simpson carried the ball, which was usually 30 or more times, McKay told the media, “The ball isn’t heavy” or “He doesn’t belong to a union.” Another McKay-ism was when asked to predict a game, the Silver Fox would say, “If we play as well as we can play, and they play as well as they can play, the Trojans will win.”

Dodgers fight on – Part 2: And, yes, Dodger Stadium organist Dieter Ruehle played Fight On with a sampling of Tribute to Troy. With all due respect to the accomplished organist, Tribute to Troy just doesn’t have the same impact as Dr. Bartner’s Trojan Marching Band.

The last word: And now the latest take on the Coliseum renovation through the  Coliseum website camera: https://app.oxblue.com/open/usc/lacoliseumrenovation