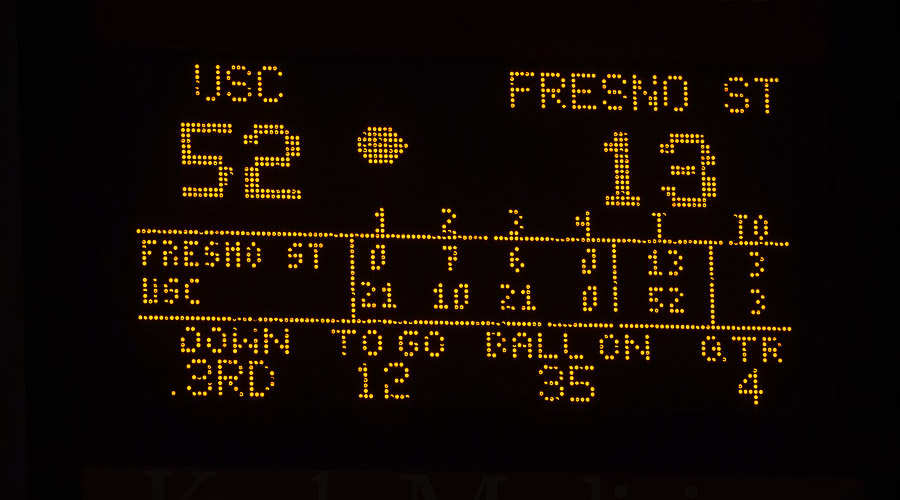 Something in common: The Trojans and Nebraska have played one common opponent this season, Fresno State, which the Men of Troy trounced 52-13 and Nebraska smashed 55-19. The Trojans, however, did their damage in the Coliseum while Nebraska did their whipping in Fresno.

Interim déjà vu: Nebraska interim head coach Barney Cotton feels positive about his Cornhuskers chances in the National University Holiday Bowl. Cotton says, “This team has outstanding character and leadership, and we would like nothing more than to send our seniors out with a second straight bowl victory and a 10-win season.”

The television window: It’s not a New Year’s Day bowl, but the National University Holiday Bowl on Dec. 27 has a primetime viewing window (7 p.m. and on a Saturday on ESPN). It’s also the only bowl game on the tube at that time slot.

Ticket count: Nebraska reportedly was given 6,000 tickets and has sold half for the National University Holiday Bowl. However, reports out of Omaha say that airfare to San Diego is currently running between $700 to $1,000, and local travel agents are saying they are not providing airfare in their packages because of the high price for an airline ticket.

Home area advantage: While the Trojans figure to have an impressive showing of fans for the Holiday Bowl, there is concern that Nebraska might not. According to the Omaha Ledger, “Nebraska will be making its fourth trip to the Holiday Bowl, and the third in the past six seasons.”

On second thought: Trojans junior quarterback Cody Kessler, who said weeks earlier that he was returning for his senior season, now says will consider the NFL and will fill out an evaluation card. Wonder what the reaction of backup QB Max Browne was when he heard that.Chargers power: With the Trojans coming to San Diego, probably the most disappointed San Diego USC fan is former Trojans corner Shareece Wright, who is currently with the San Diego Chargers. The Chargers will be playing their last game of the regular season in Kansas City that weekend.The calendar: Obviously the Trojans will be making their first visit to the Holiday Bowl, but Nebraska’s appearance will mark the first time since 1994 that a Big Ten has participated in San Diego.

Shock Treatment: That’s probably what Wisconsin athletic director Barry Alvarez needed when he found out that his head football coach, Gary Anderson, had taken the Oregon State job after just two seasons in Madison. At Wisconsin, Andersen was19-7 and won the Big Ten West Division this season. The Trojans won’t find out first-hand about Anderson and the Beavers in 2015 or 2016 because the Men of Troy don’t play Oregon State.

Who goofed: Maybe it was scholarship limits at the time, but Arizona sophomore linebacker Scooby Wright lll, who was named this past week as the 2014 Bronko Nagurski Trophy winner as the national’s top defensive player, said he was recruited by the Trojans, Boise State, Cal, and Washington but never offered a scholarship by any of those school. Only Arizona offered Scooby a scholarship.

Walk-on power: You can’t blame Scooby Wright lll for grabbing the Arizona scholarship offer. Of course, it’s not like the Trojans haven’t had success with walk-ons the last ten seasons. Perhaps the linebacker name Clay Matthews, now of the Green Bay Packers, comes to mind.

After further review: When you look back at it, Pete Carroll’s collection 2008 of linebacker talent was amazing. You remember Brian Cushing, Rey Maualuga, and the aforementioned Clay Matthews, don’t you?

Foreshadowing: If strength of schedule is a major component and concern for the College Football Playoff selection committee, the Trojans could be behind the eight ball in 2015 playing the non-conference likes of Arkansas State and Idaho.

Big Apple success: Last week, former Trojans defender Devon Kennard, now of the New York Giants, became the first Giants rookie to win the NFC Defensive Player of the Week. A former fifth-round draft choice, Devon had six solo tackles, including two sacks, two tackles for losses and a forced fumble in the Giants victory over Tennessee. Couldn’t happen to a nicer young man and a smart one, too.

Ho hum: Former UCLA head football coach Karl Dorrell, Trojan football’s best friend, was recently fired as offensive coordinator and quarterback’s coach at Vanderbilt. Vandy had one of the worst offenses in the country. It ranked 112nd in total yards, 112th in rushing and 106th in passing.

Mr. Maturity: Listening to USC-bound center Cole Smith out of CIF Champion Mission Viejo High speak, you get the immediate impression that he is a very mature and spirited young man. The son of former Los Angeles Rams All-Pro center Doug Smith, some insider are saying that young Cole may be the best Trojans center prospect since Ryan Kalil.

The one and only: Cole Smith is the only Trojans commit to win a 2014 CIF title.

Who knew: Guess when Georgia Tech and its option offense embarrassed and upset the Trojans 21-7 in the Sun Bowl little did any of us know it was really the beginning of a return to significance for the Ramblin’ Wreck.

The coaching tree: Former Nebraska head coach Bo Pelini, who was recently fired by the Cornhuskers and replaced by former Oregon State head coach and Trojans offensive coordinator Mike Riley, is reportedly in line to accept the open Youngstown State job. The president of Youngstown State is former Ohio State head coach Jim Tressel (go figure), who the 2009 Trojans dealt a 18-15 defeat of Tressel’s Buckeyes back in Columbus.