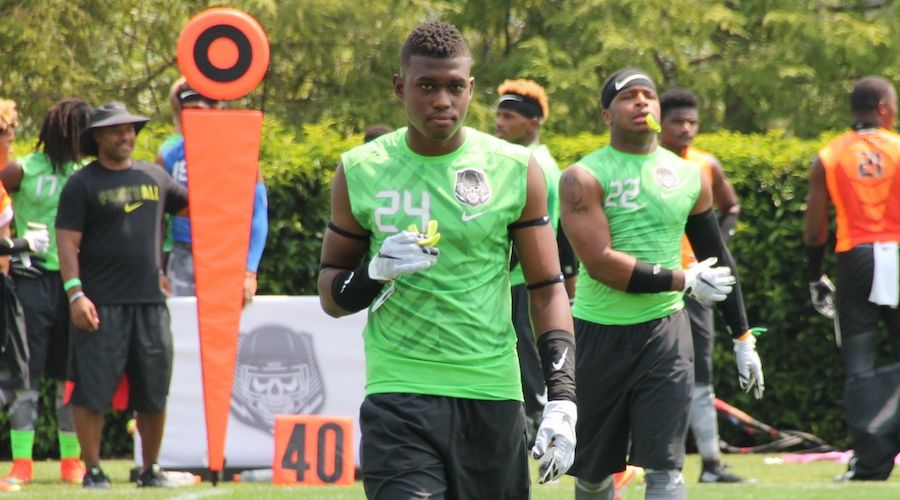 Perception is reality: It’s pretty amazing how two Trojans verbals, receiver Trevon Sidney (La Puente, Calif./Bishop Amat) and safety C.J. Pollard (Gardena, Calif./Serra – above photo), at The Opening can generate so many positives and national headlines. For Steve Sarkisian just the publicity alone and in front of those 166 blue-chip prospects was worth its weight in gold…or should we say cardinal and gold.

A commitment: Not that there are any expectations of a change of heart, especially after Trevon Sidney released that slick video announcing his intentions to sign a letter of intent with the Trojans, but the Bishop Amat star told the media that he will continue to take recruiting trips, which will include Notre Dame, Michigan, and Washington. Trevon said he is unsure about the remaining two visits.

A commitment – Part 2: In this day and age, it’s certainly not unusual for any verbal commit to continue to take recruiting trips after making a public announcement, and Trevon Sidney said one of the reasons he will continue to take out-of-state trips is simply because he has never been outside California per say.

Question: Has there ever been a recruit that has a made a decommitment video?

Solid as a rock: On the other hand, there will be no such post-announcement recruiting trips from Trevon Sidney’s future Trojans teammate, safety C.J. Pollard, whose father and mother attended USC. C.J. is about as cardinal and gold as you can be without having signed a LOI.

Reality show: It’s still amusing to me how the media expectations for 2015 Trojans grew from a initial bid into the College Football Playoff spot, to a Rose Bowl matchup with Michigan State, to grasping for a respectable bowl game.

The mags: Let’s not forget that preseason football magazines have a “soon-as-spring practice-is-over” deadline for its writers, so there is the rush-rush aspect to it. In other words, some are more thorough and accurate than others.

The mags – Part 2: Even though I was there for most of spring ball, I always check or at least try to find out who wrote the preseason info on the Trojans before I take the evaluation seriously. There are times when the editors back at the “home office” inject their own perspective, which seems to subtract from the credibility of the writer’s original story.

Butkus Award winner: One of The Opening camp counselors that worked with linebackers last week was the Trojans lone Butkus Award winner Chris Claiborne (1998), who I still think is the best Trojans linebacker I’ve seen in 53 years of watching USC football. Forget about his NFL career, as purely a college inside linebacker wearing cardinal and gold, this edition of No. 55 is the best of the best, although I expect this position can come under intense scrutiny.

Butkus Award winner – Part 2: Working alongside Chris Claiborne at The Opening was former Trojan and three-time Super Bowl champion Willie McGinest, who also wore No. 55 as a Trojans. And you don’t think the appearance of Willie didn’t get the attention of The Opening campers?

No Fun League: I know that a lot of folks will point out that Chris Claiborne didn’t last in the NFL, but that was totally Chris’s choice. He once told me that he left the pros because he found that football, for him, was no longer fun.

No Fun League – Part 2: Chris Claiborne isn’t the only Trojan I’ve talked with that quickly grew tired of the NFL. I wrote an ESPN story after spring ball in which former Trojans All-America nose tackle Sedrick Ellis told me he retired because “I was sick of football and football was sick of me.”

Fasten your recruiting seatbelts: Current Trojans linebacker verbal commit Mique Juarez (Torrance, Calif./North) told The Times at The Opening that he is still committed to the Trojans, but he will use all five recruiting visits this fall.

Fasten your seatbelts – Part 2: Mique Juarez says that he will take trips to Nebraska, Michigan, and Notre Dame. He also said that he already knows about USC and UCLA because they’re “right down the street.” So that leaves two potential wildcard visits if Mique chooses to finish his maximum five visit limitation.

Inside Mique: One of the highlights of The Times interview of Mique Juarez was when the talented linebacker said that the USC commits at The Opening were really on top of him to remain a Trojans commitment, but the UCLA players at The Opening hadn’t really talked recruiting with him. One thing for sure, the recruitment of Mique Juarez won’t be a done deal until he signs his LOI in February. This still shapes up as a classic USC vs UCLA recruiting struggle.

The Billboard: At The Opening, Trojans solid verbal linebacker Daelin Hayes had a nicely done interlocking “SC” shaved into his head. Hey, the kid said he is doing everything he can to help his Trojans recruiting class.

Notre Dame Weekender: It’s not unusual for Notre Dame to bring in Southern California recruits when the Trojans head back to South Bend. One of this season’s best recruits, talented wide receiver Javon McKinley (Corona, Calif./Centennial), will be in Notre Dame Stadium on Oct. 17 when the Irish and the Trojans have at it.

Underappreciated: For those of you not familiar with former Trojans quarterback Vince Evans (1974-76), all he did his senior season was become the MVP of the 1977 Rose Bowl Game (a 14-6 victory over Michigan), guide the Trojans to a top five national ranking, and in his last three consecutive games as a USC quarterback help defeat UCLA, Notre Dame, and Michigan. Vince went on to play in the NFL with the Raiders and the Bears during his 14-year NFL career.

The capper: During OC All-Star Game practices, Noah Evans was seen wearing a USC hat, so the fact that he’s a tight end and the Trojans are always looking for tight ends, we’d better catalogue his name for the future. As for the OC All-Star Game, Evans gave a good account of his talents on Thursday night, although his North team went down to defeat, losing to the South 30-20.

Say what: Surprisingly, Trojans junior tight end Jalen Cope-Fitzpatrick has been named to the 2015 John Mackey Award Watch List, which features the nation’s top returning tight ends. Considering Jalen didn’t play last season due to academic issues and has three catches for 16 yards in his career, maybe there’s hope for the rest of us to land on somebody’s Watch List.

No fooling: In senior All-Pac-12 center Max Tuerk, yet another Trojan has been listed on an Outland Trophy Watch List. Yet in it’s long and glorious football history, only one Trojan, offensive tackle Ron Yary (1967), has won the Outland Trophy, which is annually given to the nation’s top interior lineman.

The final word: With Steve Sarkisian’s current recruiting Class of 2016 now headed toward the top 5 nationally, imagine how it could all finally end with signing day in February if the Trojans have an exceptional 2015 season.