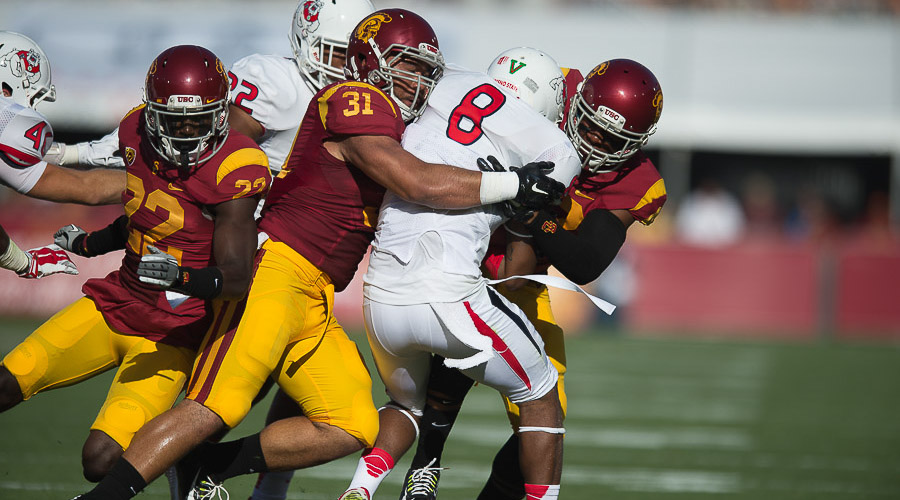 Haden on concussions: After the surprise announcement by young San Francisco 49ers linebacker Chris Borland to retire, Trojans athletic director Pat Haden responded in his State of Troy message regarding concussions: “Football changed my life. And while it did so, I did have four concussions during my playing career (one in high school, two in college and another professionally), so I understand both sides of the debate.”

Haden on concussions – Part 2: “At USC, we believe that we have the best concussion protocol in the country because we take that concern very seriously. We travel with a neurosurgeon. We have someone in the press box observing the game to see if there is something that the trainers and coaches might miss on the field. While we have taken every possible measure to prevent and treat them.”

Haden on concussions – Part 3: “Concussions are going to occur in football, as we also deal with in soccer and other sports here at USC, so everybody has to make that decision for themselves about the costs and benefits of any sport.”

Thumbs up: I thought that Pat Haden’s comments on concussions were right on, and thought he addressed the question in a very positive, sincere, and sensitive manner.

The return: The Trojans return to spring football practice on Tuesday afternoon, and it will be curious to see if there are any scrimmages in the future besides the final Coliseum scrimmage on Saturday, April 11, in the Coliseum at 3 p.m.

The plaques: Now that didn’t take long. Both All-America defensive tackle Leonard Williams and wide receiver Nelson Agholor had their All-America plaques installed along the “All-American” walkway from the lower level of the John McKay Center to the Trojans practice facility across the street.

A question: Should a USC player get an All-American plaque on the walkway of the John McKay Center if he is listed below a first-team All-America?

Hall of Famer genes: Lincoln Kennedy, the biological father of the Trojans starting junior right tackle Zach Banner, is a member of the 2015 College Football Hall of Fame class. Kennedy played at the University of Washington.

Scary numbers: The Los Angeles Times pointed out this week that last season Trojans tailback Javorius Allen and receiver Nelson Agholor combined for 3,607 of their team’s 7,348 all-purpose yards. That’s nearly half of their team’s offensive yards. On paper, that won’t be easily replaced.

It’s Gross: Daryl Gross, former Trojans assistant athletic director, and athletic director for the past 12 years, reassigned his AD position with the Orange to take another position after the athletic scandal with the Syracuse basketball program, under Hall of Fame head coach Jim Boeheim.

More Gross: At one time, there was conversation that Daryl Gross was in the mix to perhaps become the nest athletic director at USC, but you can bet that after the recently announced NCAA sanctions against Syracuse that ship has sailed. If you’re looking for a future replacement AD candidate for Pat Haden, look no further than current Senior Associate Athletic Director Mark Jackson, although insiders say that Senior Associate Athletic Director Steve Lopes would be a strong candidate.

The financial advisor: Former Trojans quarterback Matt Barkley is among 20 current and former NFL players taking part in the inaugural NFL Finance Camp March 17-20 at the University of Miami School of Business Administration.

On the Matt: So, the Philadelphia Eagles have resigned quarterback Mark Sanchez and recently worked out free agent QB Tim Tebow. So what is up with Matt Barkley and is he really on the trading block for draft choices? It would be quite a coup if head coach Chip Kelly could maneuver to draft his old Oregon quarterback Marcus Mariota in the upcoming NFL draft.

The schedule: For those that are giving the Trojans some gruff over scheduling Arkansas State and Idaho for its first couple of games for 2015, you might like to know that Notre Dame has scheduled mighty Ball State for 2018.

No. 1: Dr. Art Bartner’s USC Marching Band, called the nation’s top college marching band, according to USA Today, is having fundraiser with “A Tribute to the Music of Film on April 26 in Bovard Auditorium at 3:00 p.m. The afternoon will feature memorable music, special guest stars, and Academy Awards-style movie montages. Do you think they’ll be able to sneak in “Conquest,” which was taken from the 1947 movie “Captain of Castile” with a few tweaks here and there? For ticket information, go to: uscband.com/tickets.

Captain of Castile: The movie from which “Conquest” came from starred Hollywood legend Tyrone Power, and the music was scored by Oscar Award winning composer Alfred Newman.

The final word: So have I sparked your interest in the original “Conquest”? All righty then, then it’s time to watch and listen to the original.