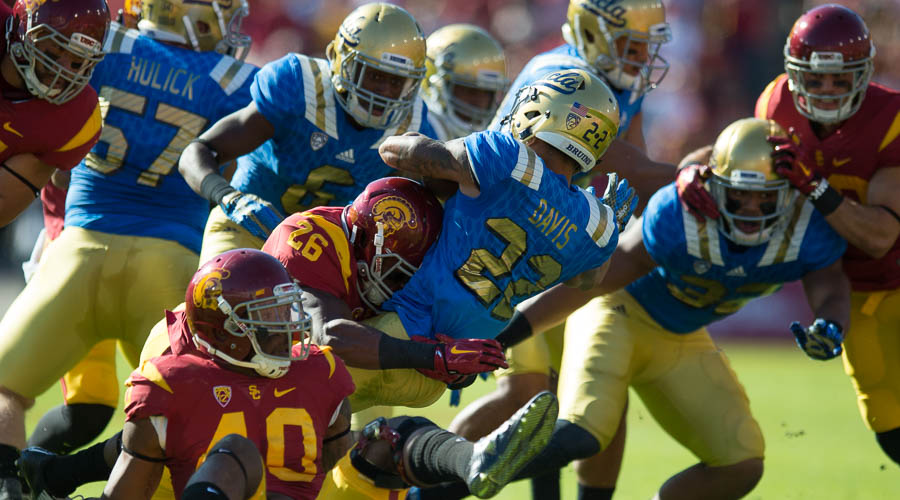 Honor thy mother: Like many Southern California families, the Katz family was a house divided – my mother a rabid USC fan and my father a staunch UCLA fan. Although both have passed, there is part of me that tells me mom is pleased that the Trojans waxed UCLA, 40-21, this past season in football and swept the Bruins three times in men’s basketball. I can just hear her still taunting dad and waving the two-fingered “Fight On” hand sign. Happy Mother’s Day, Mom.

Mother’s Day remembrance: On this Mother’s Day, one can never forget the quote from legendary Trojans football coach John McKay, who said he had a distinct advantage in recruiting his own son, J.K. McKay, out of La Puente Bishop Amat High. The elder McKay once quipped, “I had a recruiting advantage; I slept with his mother.”

The mother load: The Southern California region has always been a mother load of talent, and when the Trojans are at their recruiting best, it’s sprinkled in with some out-of-state, blue chip players. However, it was somewhat disappointing for Trojans fans when St. Louis High (Honolulu, Hawaii) quarterback Tua Tagovailoa, a reputed, lifetime Trojans fan decided to take his talents to Alabama. But there is more to this story.

More Tua: It didn’t come as a total shock that Tua Tagovailoa announced last Monday night that he would be heading to Alabama. Tua’s family had said prior to his announcement that they would be even willing to move to Alabama to follow their son’s college football career if he decided on the Crimson Tide.

Mama said: After Tua Tagovailoa made his announcement to Alabama on live TV in Hawaii, his mom said that the No. 1 thing that impressed her the most about the South was its devotion to God and religion. Tua’s dad also echoed that sentiment. Well, it’s been said many times in the past that college football in the South is a religion, and this time it paid off.

Singing Mama: Toya Martin, the mother of Trojans offensive coordinator Tee Martin’ four children, is also a recording artist, having hit singles like “I Do!” (2001) and “No Matta What (Party All Night)” (2002).

Sign here: No doubt the mother of former Trojans quarterback Max Wittek got an early Mother’s Day present when Max, who transferred from Troy to Hawaii, was signed as a free agent by the Jacksonville Jaguars. If Max was looking for an NFL chance or opportunity, this is his NFL shot and not doubt this made mama happy.

A reminder: For those that have already forgotten about the Class of 2016 and have been distracted by the Tua Tagovailoa commitment to Alabama, don’t forget the Trojans made big headlines back in February when they had a last minute Hawaii recruiting victory over Oregon when running back Vavae Malepeai (Ajea, Hawaii/Mililani) made the switch from Ducks to Trojans.

Wrong number: When he was recruited by former Trojans head coach Lane Kiffin, linebacker Lamar Dawson was awarded the Trojans legendary No. 55 before he even stepped on campus. Unfortunately for Dawson, he was never able to live up to the prestigious number. Hopefully, the lesson here is not to entice a recruit with a legendary number until he proves it on the field. Unfortunately for Dawson, he was not drafted last week and has yet to be signed as a free agent.

Child prodigy: Trojans sophomore inside linebacker Cameron Smith, the Pac-12 Defensive Freshman of the Year, was so advanced in his football skills at a young age that he played youth football against eight graders when he was in fourth grade.

The Olympian: The 2016 Summer Olympics in Rio de Janeiro will begin on Friday, August 5, and conclude on Sunday, August 21. Should Trojans junior All-Pac-12 corner Adoree’ Jackson make the Olympic team in the long jump, it figures that he could miss early training camp time in early August as his teammates prepare for Alabama.

The Olympian – Part 2: A friend of mine that participated at the highest level of D-1 track and field told me recently that although Adoree’ Jackson is a “foot” away from serious Olympic Games consideration, a foot in the long jump is like “a universe apart.” He thinks Adoree’ will give it the old college try to make the U.S.A. team but will not be able to make up that foot.

Where are they now: Former Trojans wide receiver Brad Walker, the trivia answer to who was Reggie Bush trying to lateral to in the BCS title game against Texas, has graduated law school and is now preparing for the California State Bar exam.

Odds makers: Alabama has officially opened a 13-point favorite over the Trojans in the season opener for both teams. Apparently, the “experts” see a potential “flaw” in the defending national champions kicking game or think the Crimson Tide are a touchdown and two field goals better than the Trojans.

You’re outta here: For the 2016 season, the rules committee has passed a rule that says a coach who commits two fouls for unsportsmanlike conduct will be disqualified from the game. He must leave the playing field before the ball is next put into play, and he must remain out of view of the playing field for the remainder of the game.

Replaying the replay: The rules committee has also improved an experimental replay rule for the 2016 season. This experiment will allow what is being referred to as a “collaborative approach” to the use of instant replay. This means that the replay official will be in communication with observers who are watching the game on television at a site other than the instant replay booth. The replay official will be in consultation with the remote observers while reviewing a play. The purpose is to allow for a second observer in addition to this replay official to assist in making the decisions about a review.

You don’t say: FOX Sports and BTN have announced that former Ohio State running back Robert Smith will join their college football coverage this season. Many moons ago, Smith was a high value recruit, and the Trojans hung in there with Robert to the very end.

Name change: In case the Trojans make it there some day, you might want to be aware that the Citrus Bowl Stadium in Orlando, Fla., is being renamed Camping World Stadium.

A reminder: Okay, let’s beat this one to death. The NCAA Division I Board of Directors has rescinded a rule prohibiting FBS coaches from holding or working at camps and clinics away from their school. Okay, anybody for a USC spring practice week in Hawaii or Orlando?

The last word: As some of you may know from last Sunday’s IMHO, I had a senior moment when I wrote Clancy Williams instead of Clancy Pendergast in a tidbit. Who goofed, I’ve got to know. The answer is…me, I goofed. If you’re wondering how I could have written Clancy Williams instead of Clancy Pendergast, well, with the Rams returning to L.A., my feeble brain reached back to Clarence “Clancy” Williams, a former defensive back for the Rams (1965-72). A 1964 All-American and first round draft pick out of Washington State in 1965, old No. 24 spent his entire NFL career with the Rams. Unfortunately, Clancy passed away from cancer in 1986, but obviously gone but not forgotten.