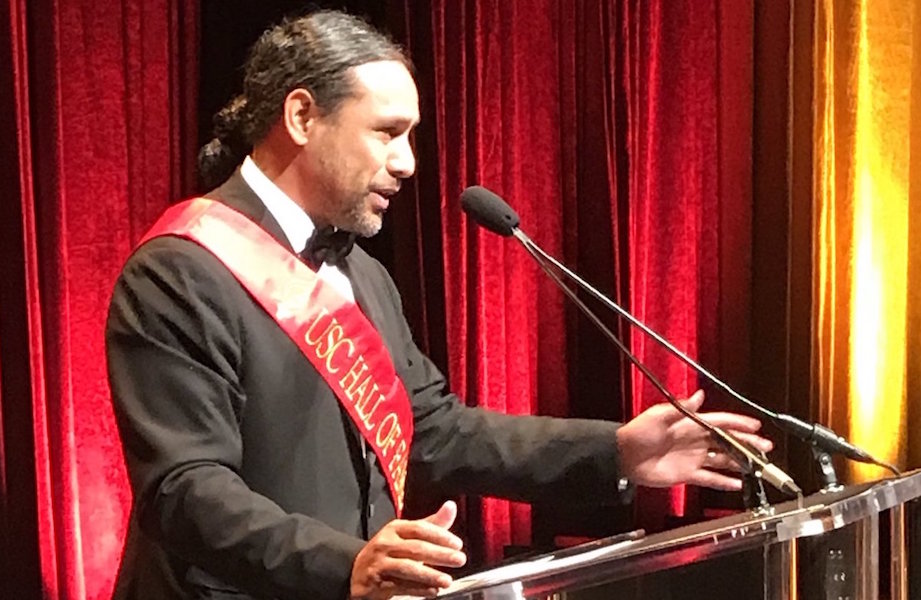 Welcome to immortality: Saturday night was a big night at the Galen Center on campus, as five former Trojan football players were among the 18 inductees enshrined into the USC Athletic Hall of Fame. To refresh your memory or should we say “memories,” those pigskin luminaries include safety Troy Polamalu (photo above). linebackers Chris Claiborne and Charlie Weaver, and wide receivers Rod Sherman and J.K. McKay. If you were starting a USC roster, these former stars would certainly be considered part of the pecking order.

Bringing the wood: No inductee in this year’s selected list shined more brightly than former All-America safety Troy Polamalu, as hard a hitter wearing the cardinal and gold that I’ve seen in watching 55 seasons of Trojan football. Troy emboldened everything a Trojan football player is supposed to be. When you talk about one of the greatest of all time, Polamalu is deep in the Trojan conversation, and, yes, he ranks right there with the legendary Ronnie Lott. Enjoy No. 43 at his finest. Take a look: https://www.youtube.com/watch?v=eQ0_IMq2u8Y

The only one: When it comes to USC linebackers, only one has won the Butkus Award (1998) and his name is Chris Claiborne. IMHO, I believe that Chris is the greatest middle linebacker in the history of USC football. His ability to play from sideline to sideline and to control a game defensively inside is nearly unmatched. Once a standout high school basketball player, he may not have had the luxury of playing on great USC teams, but his weekly performance were jaw dropping. Meet Chris Claiborne in this Nissan Q&A: https://www.youtube.com/watch?v=uxnlkRlKJqw

The Catch: When you talk about former wide receiver Rod Sherman, there is one play signature reception that lives in USC lore. Unless you purposely don’t pay attention to immortal cardinal and gold plays, everybody that follows USC football history knows of Rod’s fourth-down, 15-yard TD catch with 1:33 to play against unbeaten and top ranked Notre Dame in 1964, a score that put the Trojans ahead for good and a 20-17 win. The play was called “84-Z Delay” and brought Irish players to their knees at the final gun in the Coliseum. Take a look and go to the 39:40 mark and relieve the upset: https://www.youtube.com/watch?v=MjmLOyk_xxw

The hit: When it comes to legendary defensive plays in a cardinal and gold career, HOF inductee and former All-America outside linebacker Charlie Weaver is burned into Trojan fans everywhere. When Trojan historians talk about the greatest of Charlie, they always point to a head-on collision with UCLA quarterback Dennis Dummit in USC’s heart stopping 14-12 victory over UCLA in 1969. A major cog in the immortal defensive front known as the “Wild Bunch” as a junior, Weaver went on to have an All-America senior season. Oh, the famous hit? Click below and go to the 2:45 mark and see for yourself: https://www.youtube.com/watch?v=OEsXiytR_D8

Son of a coach: Hall of Fame inductee J.K. McKay, the son of legendary USC football coach John McKay, was a standout Trojan wide receiver and former USC athletic administrator. His playing days that will always be revered by Trojan fans. J.K. was the consummate route runner and possession receiver. He was a member of USC’s 1972 and 1974 national championship teams and played in three Rose Bowls.  J.K.’s late-in-the-game, 38-yard touchdown reception (from childhood friend Pat Haden) helped the Trojans to a dramatic 18-17 comeback win over Ohio State in the 1975 Rose Bowl to seal the national crown (J.K and Haden were the game’s Co-MVPs and in 1988 he was inducted into the Rose Bowl Hall of Fame). Need a reminder of the greatness of No. 25? Watch McKay in the 1975 Rose Bowl Game as he makes his immortal catch that comes  at the 4:04 mark of this video: https://www.youtube.com/watch?v=i99nER5cexI

The increase: The Trojans, who saw a 5.8 percent increase in the number of fans attending its home games in 2017, attracted an average of 72,683 spectators to the Coliseum for seven games. The Trojans also produced a season-high crowd of 84,714 during a 27-24 overtime win against Texas on Sept. 16, a mark that eclipsed the combined crowds for the NFL’s Rams (56,612) and Chargers (25,381), who both played in Los Angeles the same weekend.

Even more September to remember: A true national billboard arrives on Saturday, September 15, as the Trojans plane to Texas in a game with huge significance for both teams and conferences.

A November to remember: On November 24, BYU makes the short trip to Utah while the Trojans host the Irish in the Coliseum.

Jake the star: The Pac-12 Networks delivered its most-watched Facebook Live video ever during the Sept. 2 USC post-game press conference, which featured Trojans’ blind long-snapper Jake Olson who played in the Trojan’s 49-31 win over Western Michigan. FOX Sports also reported a Pac-12 Networks production, highlighting Olson’s snap on FOX Sports’ Facebook page, ranked as one of their most-viewed videos of the 2017 season with 2.7 million views.

In case you were CFP wondering – Part 2: The other College Football Playoff Semifinal will be played on the same Saturday but at the Capital One Orange Bowl (Hard Rock Stadium) in Miami Gardens, Florida, at 4 p.m. or 8 p.m. ET/1 p.m. or 5 PM PT on ESPN.

In case you were CFP wondering – Part 3: The College Football Playoff National Championship will be played on Monday night, Jan. 7, at Levi’s Stadium in Santa Clara, California at 8 p.m. ET/ 5 p.m. PT on ESPN.

In case you were wondering – Part 4: The 2018 Pac-12 Championship Game will be played on Friday night, Nov. 30, at Levi’s Stadium. Kickoff time has not been announced, but you can figure sometime between 5- 6 p.m. PT and televised by FOX.

In case you were wondering – Part 5: The 2019 Rose Bowl game in Pasadena will be played on afternoon, Jan. 1, on ESPN at 5 p.m. ET/2 P.M. PT. Since this is not a CFP, it’s possible this could be a Pac-12/Big 10 clash provided that neither conference champion is not invited in the CFP playoff picture.

The last word: And now the latest visual update on the Coliseum renovation: https://app.oxblue.com/open/usc/lacoliseumrenovation