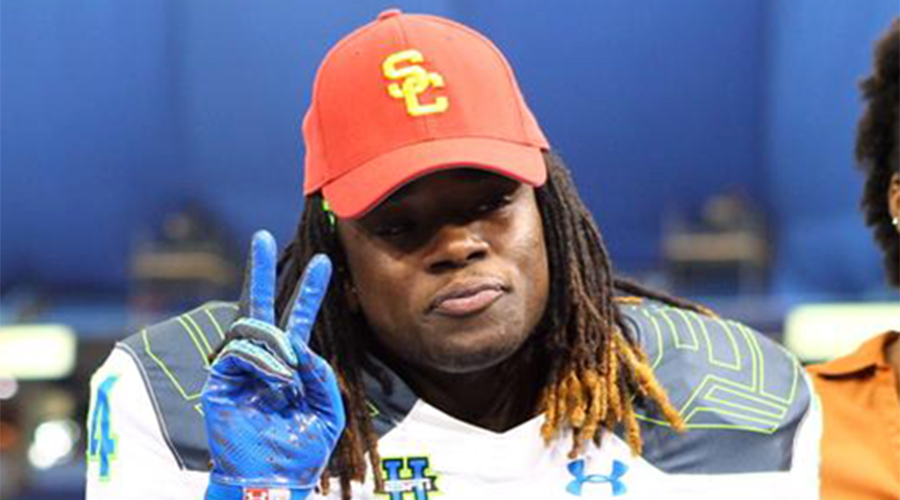 The appearance: One of the more intriguing moments of the players’ voluntary workouts was the arrival of explosive incoming running back Ronald Jones ll (above photo) from McKinney, Texas. We won’t see the “real” Jones in action until pads come on in August, but you’ve got to like that long, dark flowing hair, which should be a valuable marketing item if Ronald lives up to his vast potential.

The Marketeer: Perhaps if Ronald Jones ll becomes an All-American and eventually an NFL star, former Trojans All-America safety and future NFL Hall of Famer Troy Polamalu can give him some marketing tips.

Odd odds: The Golden Nugget sportsbook says that the Trojans are a 3-point favorite to defeat UCLA in the Coliseum on Nov. 28. According to esteemed WeAreSC.com Hall of Fame writer Steve Bisheff, if the game were played at the Rose Bowl, the Bruins would be a 3-point favorite and that’s with a probable freshman quarterback in Josh Rosen. Do you buy “Bish’s perspective? I do.

Duck pointers: According to The Golden Nugget sportsbook, the Trojans are at least 6-point underdogs at Oregon on Nov. 21. It’s rather unsettling given the fact that the Trojans have a three-year starting quarterback and Heisman Trophy candidate in Cody Kessler… and the Ducks will be relying on a possible transfer signal caller.

The comparison: Since Oregon on the road and UCLA in the Coliseum come back-to-back in November, the Golden Nugget odds make you wonder why Oregon with no returning quarterback is so heavily favored, considering the Trojans are being touted as the class of the Pac-12.

The comparison – Part 2: Then again, you have to always ask this question: Can a UCLA freshman in the Coliseum really defeat a team led by Cody Kessler, and can a Ducks transfer quarterback beat the Trojan in Autzen Stadium? I can buy a USC struggle in Autzen Stadium, but losing to a UCLA true freshman quarterback should make every Trojan wince.

IMHO: If the quarterback for Oregon and UCLA are Vernon Adams and Josh Rosen, respectively, one thing to consider is that by the time November rolls around, they won’t exactly be rookie quarterbacks to their programs. There will be a lot of experience gained for these two opponents from September to the later part of November.

IMHO – Part 2: The Golden Nugget odds for the Oregon and UCLA game also suggest that the boys that lay such odds want to see the Trojans coaching prove that they can win the big ones.

The latest verbal: Local Westlake Village Oaks Christian wide receiver Michael Pittman (6-4, 205) who committed to UCLA in October 2014 before recently de-committing has picked the Trojans over Oregon. Michael, who also had offers from ASU, Nebraska, and Notre Dame, will now be out to prove that an Oaks Christian football player can make a big impact on a Trojans roster. The Trojans have not exactly had a run of luck with players from Oaks Christian, so all eyes will be on Pittman when he eventually takes the field for the Men of Troy.

Enough number: Don’t know about you, but I am a little weary of discussing scholarship numbers, especially as the NCAA sanctions ride into the sunset.

A legacy: The recent passing of former Trojans All-Pac-8 offensive guard Donnie Hickman, who was a teammate on the Trojans 1974 national champions, brought back the question of how and why did Donnie’s son, Justin, who eventually became a UCLA All-American, end up wearing blue and gold and not cardinal and gold?

A legacy – Part 2: In case you were wondering, Justin Hickman attended St. Mary’s High (1999-2003) in Phoenix, Arizona. In the recruiting wars, UCLA, under head coach Karl Dorrell, pulled the recruiting upset over Trojans coach Pete Carroll, and how many could have predicted that?

Donnie memory: This memory of Trojans offensive guard Donnie Hickman from WeAreSC poster John Wino, “While attending USC I had the occasion to meet Donnie a couple of times, but I doubt he would have remembered me. I do remember that he drove an early 70’s Volkswagen bug, and that Donnie and his buddies (Gary Jeter &amp; Marvin Powell) used to squeeze into that car to make runs to Tommy’s. The crazy part was watching the three of them get out of that car. I swear it rose a foot. Donnie, of course, drove, and Marvin was in the passenger seat. Somehow, Gary Jeter coiled himself in the back seat.”

The clunker: I like listening to ESPN’s Colin Cowherd, and I actually was amused to loud laughter in Colin’s attempt to interview first-year Michigan coach Jim Harbaugh. Harbaugh answered nothing to Colin’s questions no matter how hard ESPN’s veteran radio voice tried. Cowherd called the interview it the biggest “clunker” he’s done in the last 25 years. Afterward, Cowherd sang the praises of other prominent head coaches he was allowing to “sell their program,” and said, “Sark is unbelievable” in a positive interviewing way.

Red alert: UCLA ran a high school camp during the same time as the Trojans Rising Stars Camp. The significance of the competition was best illustrated when Trojans linebacker recruit and verbal Mique Juarez showed up for the RSC and did not participate but showed at the UCLA camp one day and reportedly participated in linebacker drills. There is a reason some are calling Mique a “soft” Trojan verbal.

The comparison game: Class of 2017 running back Najee Harris (Antioch, Calif./Antioch) currently an Alabama commit who attended the Rising Stars Camp, reminds me of another former NorCal standout of years past…Marshawn Lynch.

Dawson’s creek: A lot of positive has been pointed toward Trojans senior middle linebacker Lamar Dawson’s way, and his return from being sidelined the past year-and-a-half seasons with a knee injury, has many encouraged. The strength of the praises thru far has been Lamar’s impressive summer outings. However, Dawson will have to prove it in games, and Trojans fans are hoping the early eventually translates to games.

Prep all-star games: For those of you that want a little high school all-star action with tradition, this Thursday night at Orange Coast College will be the 56th annual Orange County All-Star Football Game with kick-off at 7:00. For the record, there are no reported future Trojans playing in the game.

The final word: Celebrity Wife Swap: Yeah, that was former Trojans All-America quarterback Rodney Peete on last week’s edition of the ABC reality show “Celebrity Wife Swap.” We won’t go into the details of the show, but Rodney swapped wives and acquired comedian Margaret Cho as a pretend mate for he and his children. For those that like such “brainy” shows I am sure it was entertaining, but for me it was strictly Zzzzzzzzzzz.