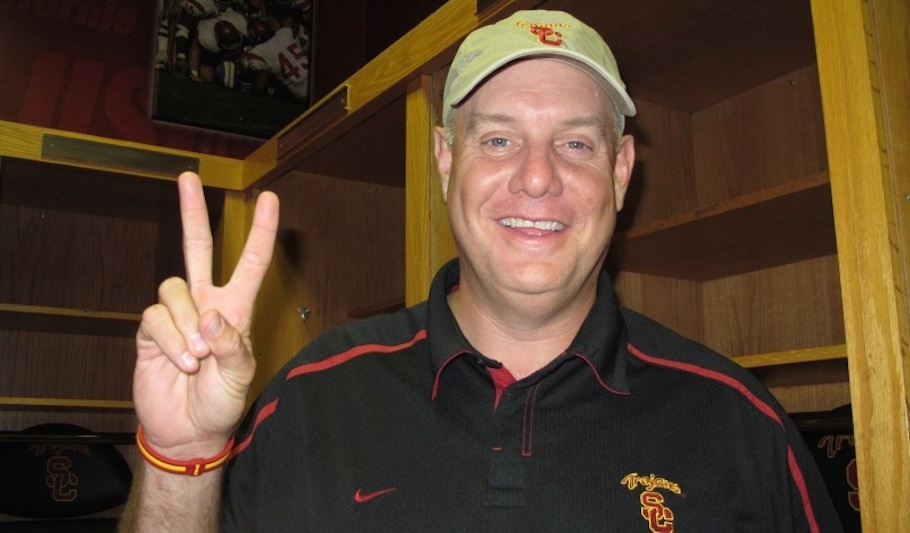 The inside trader: According to hometown NJ.com, prior to his official visit to USC this weekend, defensive tackle Rashan Gary (Paramus, N.J./Catholic), the nation’s No. 1 recruit, favored Michigan, Ole Miss, Auburn, LSU and Clemson with the Wolverines considered the leader. The recruiting irony, of course, is that when Gary was on his official recruiting trip to Michigan, recently hired Trojans special teams coach John Baxter (above photo) was still on Jim Harbaugh’s Wolverines staff, which has to bring the Trojans some Gary “inside trading” information.

Mama knows best: It still might be a shot in the dark, but Jennifer Coney, the mother of Rashan Gary and accompanying her son on his official USC visit this weekend, set off the recruiting world on Saturday by telling her hometown Internet site, NJ.com, that “USC is a game-changer, for real. Believe it or not, I have checked all the boxes.” Of course the most important “box” checked would be her son’s future signature on a national letter of intent. The question: Will the warm Southern California afterglow still be there after they return to freezing New Jersey?

Mama knows best – Part 2 (UPDATED): Since the Trojans have not publicly announced their defensive line coach, it would be tantalizing to know just what Trojans head coach Clay Helton and his defensive coordinator Clancy Pendergast have told Gary and his mother regarding the unresolved defensive line hiring process. According to sources, Gary and his mother have been told that a new DL coach would be hired by Wednesday and the new coach will fly back to meet with them in New Jersey.

Hidden message: It sure seemed a little curious that recruiting coordinator and linebacker coach Peter Sirmon and former tight end coach Marques Tuiasosopo both left during recruiting crunch time, but then again, timing is everything, isn’t it?

Pass the Advil: While Peter Sirmon’s departure to Mississippi State probably won’t amount to much recruiting damage, the loss of Marques Tuiasosopo to UCLA could become an issue. Tui was heavily involved with some standout Trojans recruits like Concord (Calif.) De La Salle studs Devin Asiasi, who is projected as a tight end, and DL Boss Tagaloa, who would seem to fit nicely into Clancy Pendergast’s 3-4 scheme.

So you thought: There was some fan grumbling when the Trojans hired two new assistants from Western Kentucky, running backs coach Tyson Helton and offensive line coach Neil Callaway. Well, in the final AP poll, Western Kentucky was ranked No. 24 in the country and the Trojans didn’t finish in the AP top 25.

Say it ain’t so: According to NBC sports, three of Alabama’s studs from the 2015 national champions are returning to school rather than head for April’s NFL draft. Tight end O.J. Howard – offensive star of the title game against Clemson – linebacker Reuben Foster, and defensive lineman Jonathan Allen are staying in Tuscaloosa.

The candidate: One of those that will be vying for the Alabama starting quarterback position next season is former Southern Californian quarterback product Blake Barnett of Corona Santiago.

IMHO: I get why all the pundits in the media have been heaping praise on Lane Kiffin as offensive coordinator for national champion Alabama. However, let’s remember that Nick Saban has been looking over Kiffin’s shoulder since the former Trojans head coach arrived in Tuscaloosa.If Kiffin is given another shot as a D-1 head coach, we’ll see what happens when he doesn’t have Saban in the room.

The chess match: Lane Kiffin says he will return to Alabama next season as offensive coordinator, which means he’ll face his former 2013 Trojans defense coordinator Clancy Pendergast. Who wins that chess match on Sept. 3?

Retrospect: Given how the Trojans performed defensively against Wisconsin in the National Funding Holiday Bowl, you have to wonder what was the thinking of SEC affiliated Mississippi State when they hired the Trojans “interim” defensive coordinator and linebacker coach Peter Sirmon, who had never been a DC before the Holiday Bowl.

IMHO: I thought that Chris Fowler and Herbstreit were professional in calling the CFP National Championship Game on ESPN. However, it seemed to me that Brent Musburger would have been a better choice for play-by-play.

IMHO – Part 2: Of course, given our druthers for the national championship play-by-play we would have brought back Keith Jackson for one final encore. Then again, why not have Jackson be the “annual” the voice of the national title game?

The pre-rankings: ESPN’s Mark Schabach has released his first “Way Too Early” Top 25 and the Trojans are No.15 while Alabama is No. 2. I thought that Schabach was being generous in his ranking of the Trojans considering so many unknowns.

The styles: It was apparent to me and most of you that in order to beat Alabama, one better have a quarterback that can move in the pocket and improvise like Clemson’s Deshaun Watson did to The Tide. If that’s the case, would the Trojans be better off with inexperienced redshirt quarterback Sam Darnold at quarterback? Of course, almost inexperienced junior Max Browne gets the ball off quickly and is very accurate, especially deep, which was Alabama’s defensive Achilles heal in 2015.

Brownie points: Former USC offensive coordinator Hue Jackson has been named head coach of the Cleveland Browns. During his time at Troy, Jackson was met with mixed review, but obviously he has gone on to a successful career in the NFL.

Mea culpa: I know he was injured and didn’t finish the season, but how could Trojans true freshman linebacker Cameron Smith not make the Football Writers Association of America Freshman All-America team?

Bonus value: According to the Trojans marketing department, “Season ticket holders receive many great benefits, including priority access to tickets to USC vs. Alabama to be played on September 3 in Texas (more information will be sent in regards to this game later this spring), discounted tickets, complimentary tickets to the Spring Game, invitations to exclusive video chats, and more.”

It’s official: Yes, those were Pac-12 officials working last Monday’s national championship game. Aside from a clock issue and some missed calls, for the most part the Pac-12 crew seemed to do something they don’t do during the conference season – throwing penalty flags.

Coliseum gridlock: The “Los Angeles” Rams are coming home, but will there be a second team (Chargers or Raiders) joining them? When it comes to money to pay for the Coliseum improvements, having two NFL teams playing in the Grand Old Lady makes a whole lot of sense from a USC financial perspective, and that’s why the Trojans will redo the fine print that says only one team can play in the Coliseum.

Coliseum gridlock –Part 2: With one and probably a second NFL team (the Chargers) heading our way, how will all this effect the timeline of Coliseum renovations? It figures that one of the issues is Coliseum lighting that meets NFL standards. It would appear that the lighting issue would be an immediate Coliseum renovation instillation because NFL exhibition games in August are generally played at night.

In memory: Veteran national sportscaster and ESPN’s first play-by-play announcer Jim Simpson passed away this past week. Simpson was involved in a number of USC telecasts over his career. He was 88.