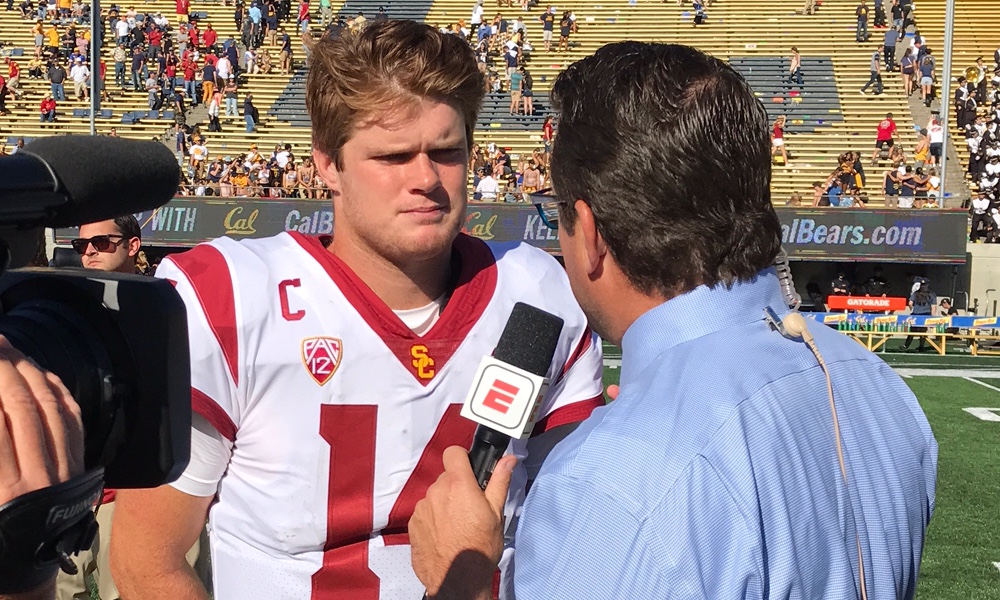 Sam’s Club: On Thursday evening, former Trojans quarterback Sam Darnold (photo above) will officially find out if he’ll be the No. 1 overall pick in the 2018 NFL draft and become the savior for the downtrodden Cleveland Browns, who lost every regular season game in 2017. On the other hand, will the hapless and inept Browns go with Wyoming QB Josh Allen? For some added intrigue, could Darnold (20-4 as a starting USC quarterback) find himself in New York City, selected by either the Giants (No. 2) or Jets (No. 3), respectively?

Sam’s Club – Part 2: FWIW, Sports Illustrated’s Albert Beer forecasts this week that Sam Darnold will be the No. 3 selection by the New York Jets. Beer writes, “Josh Rosen and Baker Mayfield are in play, but in the end the Jets will go with the safest bet (Darnold).” ESPN’s Mel Kiper predicts that Josh Allen will go No. 1 to the Browns and Sam will go No. 2 to the Giants. ESPN’s other draft guru, Todd McShay, foresees Darnold No. 1 to the Browns.

Hand size: In the Cleveland Plain Dealer, Cleveland Browns general manager John Dorsey may have given a draft hint to the direction the Browns are leaning. Dorsey said, “You all laugh at me when I say it, but I think hand size is important. With that being said, hand size in November and December, when it’s snowing, raining, it’s getting muddy. We all know the elements in Cleveland are going to play a role.”

Hand size – Part 2: If hand size is a major draft attribute for John Dorsey, then it would appear that Wyoming’s Josh Allen may be the Browns’ first selection. Allen’s hand measured 10 1/8 – –  the only 10-plus mark among the top QBs at the NFL combine. Sam Darnold’s hand size measured 9 3/8.

A vote for Sam: In an earlier interview with CBS Sports, New Orleans head coach Sean Payton was looking at this year’s NFL quarterback draft options. Payton said, “I don’t see (Andrew) Luck in this draft, and I don’t see Carson Wentz, who I liked a lot coming into the draft. I’d feel a little bit uneasy if I were at the top of this draft, and I decided I had to have a quarterback. The pressure to get a quarterback is so great in this league, I get that. But we can’t create ’em. I wouldn’t be surprised if only one of these guys is left standing in four or five years, and if so, I’d guess it would be Sam Darnold.”

IMHO: Yes, being the overall No. 1 pick in an NFL draft is quite an honor, but if I was Sam Darnold, I would rather play for one of the two New York franchises. I don’t have a lot of faith in either the Browns’ current organization or its head coach, Hue Jackson, once a controversial USC offensive coordinator. As proof of the Browns inability to either make the right quarterback picks or develop what they pick, just look at the revolving door of recent Browns quarterbacks. Since 1999, the Browns have drafted ten quarterbacks including five in the first two rounds. Oy veh!

Hamstrung: Aside from the intriguing destinations for Sam Darnold, a real mystery will be where Trojans’ tailback Ronald Jones lll is selected because there has been much scrutiny over Ronald’s now celebrated hamstring injury during his NFL workouts in Indianapolis and USC Pro Day.  IMHO, RJ will be taken in the second or third round, and most teams will not be as concerned about the “hammy” as what has been previously written. It wouldn’t totally shock me if Dallas took a chance with the homegrown Texas talent.

Getting defensive: Perhaps the most intriguing Trojan in the draft is outside linebacker Uchenna Nwosu, who figures to be a very solid pick by whomever selects him. Hopefully, Uchenna is taken by a defensive minded team that will allow his skill set to shine. The team that drafts Uchenna will be getting a very motivated player, who has continued to get better.

Green sleeves: Former Trojans defensive lineman Rasheed Green has received outstanding reviews leading up to the draft, so we’ll find out if it’s true or a smokescreen for draft rumors. Green really came on last season and figures to be a good pro if he can stay healthy and get drafted by the right team. I find Green’s draft destination perhaps the most tantalizing of all the publicized potential Trojan draft picks.

The surprise: It wouldn’t shock me if former Trojans center Nico Falah gets selected in the late rounds. There were some positive comments from within the NFL that Nico opened some eyes during workouts. One thing Falah showed during his USC career was the motivation to get better, and nobody questions his intelligence.

Concerned: Of the all the Trojans mentioned for draft eligibility, the concern here is for former wide receiver Deontay Burnett, who surprised many by declaring early. Of course, if Deontay is not drafted, there’s the free agent route, which is a viable alternative.

The longshots: You’d have to categorize former Trojans safety Chris Hawkins, nose tackle Josh Fatu, and wide receiver Steven Mitchell Jr. as longshots to get drafted this week, but all three figure to get a look somewhere and give it their best shots if given the opportunity.

The first one: One historical USC draft note, the first USC Trojan drafted by the NFL was tackle Gil Kuhn in 1937 by the Brooklyn Dodgers as the 93rd overall pick, according to the USC Football Media Guide.

First round TV: Thursday’s opening round of the 2018 NFL draft will be televised live through various outlets at 5 p.m. (PST) from AT&T Stadium in Arlington, Texas. FYI, Sam Darnold will be accompanied by Trojans head coach Clay Helton along with Sam’s agent and family.

First round TV – Part 2: The first round will air on five channels: Fox, ESPN, ESPN2 and ESPN Deportes, and the NFL Network. For FOX, Troy Aikman, the networks lead NFL analyst, will join NFL Network’s Rich Eisen and Mike Mayock at the analyst desk. Of course, there will be the usual radio coverage of the first round from the local L.A. sports talk shows.

First round TV – Part 3: The draft resumes on Friday at 4 p.m. (PDT) for Rounds 2-3, and then again at 9 a.m. (PDT) on Saturday. Two broadcast networks (Fox and ABC) and four cable outlets (ESPN, ESPN2, ESPN Deportes, NFL Network) will have blanket coverage and for the first time, as all seven rounds of the three-day affair will air live on broadcast TV.

Gameday: ESPN’s “College GameDay” will put a college spin on the selections on Thursday and Friday. Rece Davis will be joined by “GameDay” regulars Lee Corso, Kirk Herbstreit and Desmond Howard.

The hype: If you haven’t heard former NFL quarterback and QB mentor guru Jordan Palmer’s assessment of JT Daniels, here is the line that got a tremendous amount of buzz. When asked by NFL broadcaster Rich Eisen about Daniels potential and future at USC, Palmer, the brother of Carson, said, “I’ve been involved with JT since like 7th grade, and I’ve never seen anything like it before. I’ve been doing the Elite 11 for a long time and for someone to skip their senior season and for it to be a good decision. He was Gatorade Player of the Year as a junior, and he’s going to forego his senior year in high school and he’s enrolling in USC early. I’ve never seen it before.”

Last add hype: Palmer last added, “It’s going to be a competition, they’ve got some great quarterbacks at USC. If JT ends up being the guy, I don’t think there’s a ton of drop-off at the quarterback position at USC, and I think Sam (Darnold) is one of the top picks, which is a bold statement. I know that.”

Who goofed: One ticket broker is already selling individual Coliseum home games for the 2018 season. However, the ticket broker, TicketOffices.com, appears to be using the 2017 seating map, which is prior to the current Coliseum renovation. In other words, this broker appears to be selling seats that are nothing but dirt and selling them for $200.00 each. Will the dirt seats include a towel, blanket and/or cupholder?

Open House – Part 2: Regarding his new business venture, Matt Leinart said, “Between the Rams, Chargers and the new soccer stadium coming in, I’d love to be an ambassador for athletes looking to buy a home, since I’ve been in the same shoes.”

NCAA days of reckoning: It seems like decades of waiting for the NCAA and Todd McNair case to finally come to court, which will begin opening arguments on Monday at the L.A. Courthouse. It figures this expected three-week drama will really hammer the NCAA when the jury trial is over. Here’s hoping that the wait was worth it for Todd, and most Trojan fans that know the NCAA tried to out-money and judicially outmaneuver McNair and his lawyers. If things go as they should, the NCAA will finally have met its match, but we’ll see how much change there is in the most hypocritical “amateur” sports organization in the country.

McNair stare: You really have to give Todd McNair all the credit in the world to go man-to-man with the NCAA. To stay quiet and persevere is the ultimate test of one’s blood pressure. If you’ve ever been involved in a legal matter that ended up in a courtroom, it really tests your mental and physical ability to cope. The wheels of justice turn very slowly as the McNair/NCAA saga has shown.

Homecoming: In case you’re planning ahead – way ahead – the 2018 USC Homecoming Game will be against Cal on Nov. 10. The Coliseum game against the improving Bears will precede the final two games of the season, which will be back-to-back rivalry games at UCLA and Notre Dame, respectively.

The last word: With spring ball now concluded, we can all turn our attention to the daily video updates of our “beloved” Coliseum renovation project. Let’s take a look at the latest from the Coliseum website camera update: https://app.oxblue.com/open/usc/lacoliseumrenovation