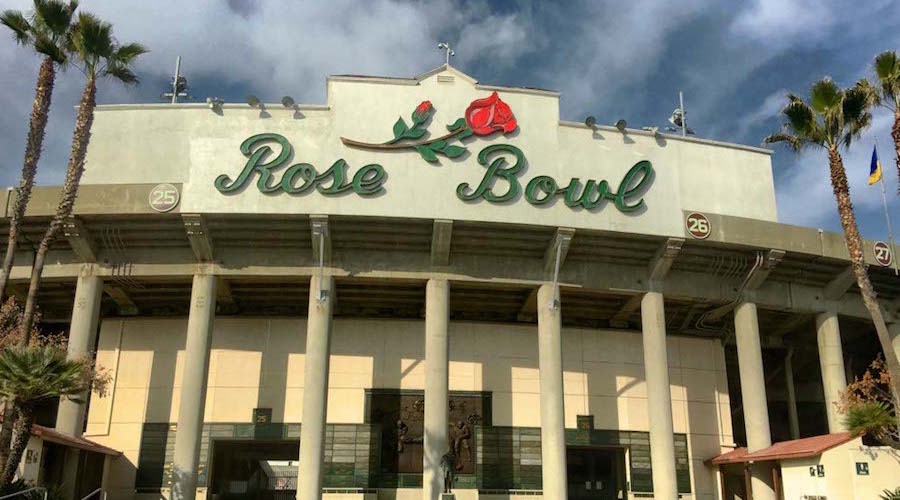 They earned it: It’s official and please don’t tell me the CFP No. 9 USC Trojans (9-3) backed into the 2017 Rose Bowl Game. They deserved it, they earned it. Colorado had its shot, and the Buffs got crushed by No. 4 Washington, 41-10, in the Pac-12 Championship Game on Friday night – case closed. In the end, there was little argument – unless you wanted one.

They earned it – Part 2: There was little media disagreement that in the end that the Trojans were the best team in the Pac-12 at the regular season’s conclusion, having beaten both Pac-12 division winners Washington and Colorado. It’s now permissible to cue up Ethel Merman’s recording of “Everything’s Coming Up Roses.” Oh, and by the way, the Trojans will be playing CFP No. 5 and Big Ten champion Penn State Nittany Lions (11-2) on Jan.2.

The earned it – Part 3: To celebrate the Trojans return to Pasadena to play the Penn State, let’s rejoice in Ethel Merman’s classic recording of “Everything’s Coming Up Roses.” https://www.youtube.com/watch?v=s62MrU8mHx4

A big challenge: So how far have the Trojans come this season? We’ll get a final summation against a Penn State team that is as hot a team – outside of Alabama – as there is in the country. They are very physical, have a real competitor in sophomore All-Big Ten second-team quarterback Trace McSorley, a stud, breakaway tailback in All-Big Ten first-team sophomore Saquan Barkley, and a defense that can “hit” with anybody. And let’s not forget that James Franklin’s Nittany Lions team beat No. 3 Ohio State 24-21 in Happy Valley on Oct. 22. Believe me, the Trojans have their work cut out for them, and Clay Helton would be the first to tell you.

A reminder: Penn State coach James Franklin was once considered a candidate in the Trojans head coach search after the firing of Lane Kiffin.

The clue: There was certainly a whole lot of nerves and intensity wondering Sunday morning if the Trojans would be ranked ahead of Colorado in the final CFP rankings, but CFP committee chairman Kirby Hocutt gave it away when he justified Washington’s inclusion into the Final Four by saying that No. 4 Washington’s only loss of the season was against another Top 10 team. The Trojans were ranked No. 11 last week by the CFP, so right there meant the Men of Troy had cracked the Top 10, which meant the Trojans had reasonably surpassed Colorado in the final rankings.

The Clue – Part 2: Another clue to the Trojans heading to Pasadena was when the AP released its Top 25 earlier than the Rose Bowl announcement and the Trojans were ranked No. 9 and Colorado had slipped to No. 10.

Bowl addition: By playing in the 2017 Rose Bowl, the Trojans will be making their 34th Rose Bowl appearance. The Trojans current record in the Rose Bowl is 24-8.

Tribute to Troy: So, get your cardinal and gold pompoms ready, Dr. Bartner’s band has some extra marching to do, and doesn’t Colorado Blvd. on Jan. 2 sound heavenly. For most Trojans fans, who would have thought after the Alabama disaster and the 1-3 start, the finish would be found beneath the San Gabriel Mountains and in college football’s most famous playing cathedral? And BTW, holiday gift suggestions just became a whole lot easier, especially if you know the shirt and cap sizes of your family, friends, and/or neighbors.

The irony: Remember the old days when Pete Carroll’s Trojans seemingly went to the Rose Bowl so often that spoiled Trojans fans would moan, “Do we have to go to the Rose Bowl…again?” Having not been to the Arroyo Seco for a Rose Bowl since the 2009 game against Penn State, it’s a real irony that the Trojans are returning to Pasadena and playing the Nittany Lions, a team the Trojans defeated handily 38-24 in 2009. Needless to say, you won’t find 2016 Trojans fans bemoaning a trip to Pasadena this Jan. 2.

Smiling Pasadena faces: And don’t think that the Rose Bowl Committee isn’t exchanging “High Fives” over the Trojans/Nittany Lions matchup. The thought of a Colorado/Penn State Rose Bowl had the staff more than a bit uncomfortable except for the economic side of vacationers spending bucks in Pasadena and SoCal.

Tough ticket: The base price options for a 2017 Rose Bowl ticket are $150 and $210 each. For those interested in purchasing Rose Bowl tickets, they will be made available to the general public through Ticketmaster this Tuesday, Dec. 6, at 8:00 AM PST.

Tough ticket – Part 2: With the Trojans return to the Rose Bowl for the first time since 2009 and a bigtime matchup between USC and Penn State, a Rose Bowl ticket should be a tough one.

One happy Trojan: As if there isn’t enough happiness in the Trojans family this Sunday afternoon to fill the Coliseum, think about Trojans grad transfer nose tackle Stevie Tu’ilolovatu, a second-team All-Pac-12 selection, who is heading to the Rose Bowl while his former Utah teammates are headed for a lower tier bowl.

More time: One of the criticisms of Clay Helton after last season’s Holiday Bowl loss to Wisconsin was that the Trojans didn’t practice much (7 days) and didn’t use the allotted 15 days. Helton said this past week the Trojans will use all their allotted Rose Bowl practice days in preparation for Penn State.

More time – Part 2: Clay Helton said he also plans to continue the same regular season practice schedule. There has been no mention of the public being allowed to view bowl practices.

Injury update: As of now, don’t expect any of the Trojans that suffered season-ending injuries to play in the Rose Bowl. Those would include the likes of wide receiver Steven Mitchell Jr, center Toa Lobendahn, and defensive lineman Kenny Bigelow.

Tackling a record: Two starting Trojan offensive tackles, seniors Zach Banner and Chad Wheeler were named first-team All-Pac-12 Team. To our knowledge, this is the first time in the modern era of two-way USC football that both starting offensive tackles named first-team all-conference. They’ll need to be all-conference in dealing with Penn State’s physical defensive line.

The Beef Bowl: One of the media perks for covering the Rose Bowl is a trip to the “Beef Bowl” at Lawry’s in Beverly Hills for both teams. The media, along with both teams on separate days, gets a free prime rib dinner and you can’t go wrong with the creamed corn.

The count: Attendance for the Pac-12 Championship on Friday night was announced as 47,118, and you could see on TV that the upper decks of Levi’s Stadium were people disguised as empty seats. I still contend that Las Vegas – the Pac-12’s city for the men’s postseason basketball tournament – would draw big attendance. After all, on short notice, would you rather spend a couple of days in Santa Clara or Las Vegas? Maybe if the Raiders build that Las Vegas stadium, there will be a change. Let’s hope so.

The cutdown: Sometimes postseason college awards leave scratching the head, as was the case this past week when Trojans defensive coordinator Clancy Pendergast did not make the final cut for the Frank Broyles Award, which goes to the nation’s top assistant coach. I don’t know what more Clancy could have done to make the final cut. Expect Clancy to show his talents in designing a solid game plan for Penn State.

Best of luck: Everything you have read about now former Trojans quarterback Max Brown is true. His was a star-crossed Trojans career, and it certainly didn’t have a happy ending. But it did, however, have a respectful ending. Max was admired by his teammates and coaches – being named a captain to start the season – and how No. 4 handled his quarterback demotion in favor of Sam Darnold. Wherever he lands, Max deserves all our good vibes…of course unless he plays against the Trojans. It’s bittersweet that Max won’t be part of the Trojans Rose Bowl roster on Jan. 2.

The last word: While Trojans fans are experiencing the thrill of returning to the Rose Bowl, there is great sadness upon learning of the passing of former Trojans tailback Joe McKnight. Here’s hoping that Joe’s family can somehow find peace in the future and that justice will be served. Personally, I’ll never forget Joe’s performance in that memorable 2009 final drive at Ohio State to help defeat the Buckeyes 18-15. Here’s a moment of silence for No. 4.