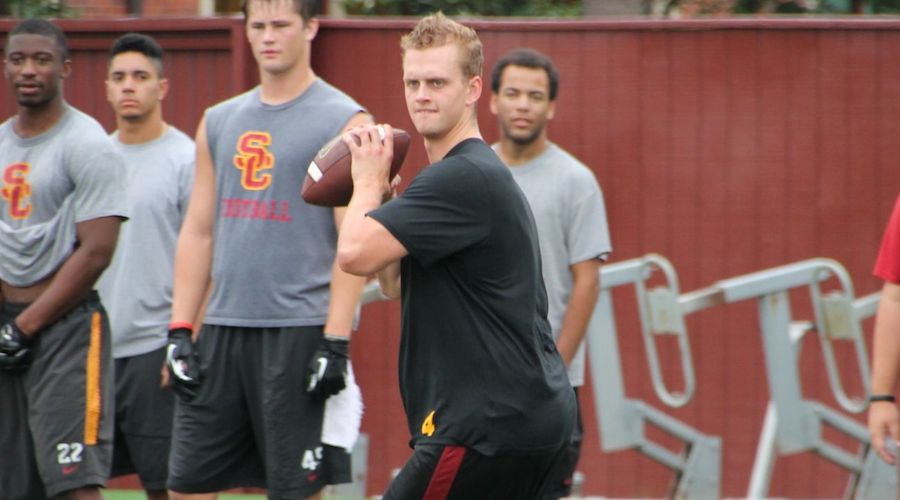 The heat of battle: There are plenty of evaluations going on during practice. One of the evaluations was how hot was it at Saturday afternoon’s practice? Hot enough for a number of sideline regulars to high-tail it into whatever shade there is above Dedeaux Field. With the temp in the mid-90s, it was a challenging day for those on and off the field. Of course, Sunday’s prediction of 96 degrees could rearrange the temperature depth chart.

Weekly practice evaluation: If you attended practice recently and didn’t know that Cody Kessler wore No. 6, you may have thought Kessler could be either No. 4 (Max Brown -above photo) or No. 14 (Sam Darnold), which is a compliment to Brown and Darnold…The quality and depth of this offensive line continues to look very promising…. It’s stunning how much weight loss and gained quickness has benefited sophomore OG Damien Mama’s game… I am cautiously optimistic in regards to the depth of the defensive line… I love the freshman class, but who doesn’t?…Senior Tre Madden is, IMHO, the strongest contender to start at tailback… WR Darreus Rogers has really stepped up his game… Su’a is Su’a.

Weekly practice evaluation – Part 2: For all his potential, let’s not forget CB Biggie Marshall is still a freshman and at times gets schooled by those talented Trojans receivers… One player who has really stepped up in pads is true freshman running back Aca’Cedric Ware. Kid is a grinder…Freshman linebacker Porter Gustin still reminds me of former All-American linebacker Jack Del Rio as a freshman… There is no more competitive position competition than between placekickers Alex Wood and Matt Boermeester…Freshman linebacker Osa Masina is living up to No. 58…At this point, there may not be as versatile a quality offensive lineman in the Pac-12 than Toa Lobendahn.

Weekly practice evaluation – Part 3: Safety Leon McQuay lll, who had a rocky sophomore season, appears more comfortable and improved at this point in training camp…Maybe Sark is serious about letting fullback Soma Vainuku carry the rock more…Despite the controversy over his defensive coordinator’s schemes and decisions in 2014, Justin Wilcox remains a nice guy, and I hope his 2015 defense takes some heat off him…Despite the controversy over his hiring, offensive line coach Bob Connelly has been well received by his linemen, and this could be a case of just being “the right fit at the right time” for all concerned…There is no bigger experiment in training camp than former offensive lineman Jordan Simmons moving to the defensive line and thus far performing admirably…I am getting the distinct impression that left tackle Chad Wheeler, coming back from knee surgery, may end up starting against Arkansas State…More than a few fans during Saturday’s practice held their breath when senior CB Kevon Seymour left the field with apparent left knee issue, which turned out not to be serious.

And you thought: Like most in the Bryce Dixon situation, it appeared to me the Judge’s “stay” ruling meant that former tight end would not only return to school but the team, as well. Well, we all know that currently isn’t happening at the moment, but I suspect things will get mighty interesting when the two parties return to court this week.

And you thought – Part 2: So Steve Sarkisian says he wants whatever is best for any student-athlete and also said on Friday he supports the university’s decision to not allow Bryce Dixon back on the team. So what the heck do you think he was going to say? “I’d love to have Bryce back because he would make our offense that much more dynamic.”

FWAA-NFF: Another week of USC training camp and another week of a released national preseason poll. This past week, the Football Writers Association of America (FWAA) and the National Football Foundation (NFF) released its Super 16 Poll. Naturally Ohio State is No. 1, but the Trojans came in at No. 10 flanked by the Pac-12’s No. 5 Oregon and No. 14 UCLA and No. 16 Arizona State.

Tight end timetable: On the starting tight end situation, coach Marques “Tui” Tuiasosopo said, “I don’t know if there is a timetable. I think those things happen naturally. At some point, it’s going to click for some of those guys, and we’ll say these are the guys that are going to play for us. Sometimes you may not know until the season, but I can tell you I am going to work hard as a coach to get a couple of those guys ready for their roles before we play the first week (Arkansas State).”

The comparison: It appears that Steve Sarkisian would like to use his fullbacks like Soma Vainuku the way the Trojans used to use former fullback standout Stanley Havili. Translation: A receiving threat as well as a running option.

Let’s get physical: Is the Trojans offensive line physical enough to be a dominant, championship force? According to line coach Bob Connelly, “We want to out physical our opponents and dominate the line of scrimmage. Championship teams are won on the front, offensive or defensive lines. I like our chances and I like our group. Are we where we need to be today? Absolutely not. I think our guys are there mentally and we have the right mindset. Our intentions are good, but we need to continue to work and have a relentless mindset every day we come out here. I don’t need any of them to put an ‘S’ on their chest or a cape on their back and being Superman, it’s all about doing your job.”

The recruiting legend: During his time as a football player and probably even more so as the play-by-play lead on Monday Night Football, the Trojans never had a better electronic media recruiter than the late, great Frank Gifford.

Beyond the bachelors: Cody Kessler (communication management) and Anthony Sarao (sociology) have begun work on a master’s degree while Kris Albarado and Tre Madden are working on a second bachelor’s degree in sociology.

More rankings: ESPN the Magazine’s college football preview is now on the stands and the Trojans are ranked No. 7. Says analyst Brock Huard – the old Washington Huskies quarterback – regarding the Trojans playing at Oregon this season, “USC would prefer to play this one way earlier, but if near full strength, QB/OL/Dl/LB all favor the Men of Troy, who didn’t lose a Heisman winner (Marcus Mariota).”

More rankings – Part 2: According to ESPN the Magazine’s Brad Edwards, the Trojans are “in” the College Football Playoff if “(Cody) Kessler matches one of the most underhyped TD-INT ratios I can recall (39-5) and wins at Notre Dame and Oregon – which might allow a one-loss USC to ride in without a Pac-12 title.”

More Edwards: The ESPN analyst say the Trojans are “out” of the CFP if “the Trojans can’t avoid injuries, especially on a D-line that loses DE Leonard Williams (80 tackles, seven sacks). Besides trips to ND and Oregon, Sept. 26 at ASU could be a trap after Stanford.”

Body twins: Freshman tight end Tyler Petite (6-6, 235) looks physically like a young Jordan Cameron (6-5, 260), the former Trojans receiver. Cameron, who didn’t see as much playing time in college as he should have under Pete Carroll, has blossomed in the NFL, now plays for the Miami Dolphins. Steve Sarkisian hopes that Tyler Petite can walk in Cameron’s shoes but with more playing time.

Here come the Yuckrish: Notre Dame has revealed their one-game Shamrock Series uniforms and trust me they’re U-G-L-Y by any standards. The new Irish nearly all green uniforms also have a hint of black and white. It’s all part of their game at Fenway Park against Boston College. When you see the Irish uniforms, you’ll think of the Oregon Ducks, and it gives another reason why schools with great tradition like USC should be extremely cautious when it comes to uniform change.

Position definition: Given the fact that the Trojans don’t consistently run out of a true “I-formation,” is calling the running back a “tailback” just a matter of semantics?

Honoring the past: Salute to Troy, which will be held be Aug. 22 on Cromwell Field, will be honoring Trojans teams from 1965 and 1990.

Duck pond: The Trojans visit Oregon in a titanic on Nov. 21, but the Men of Troy won’t have to face standout running back Thomas Tyner who recently had shoulder surgery from a hit he took last season against Washington. Of course talented running back Royce Freeman will still be waiting for the Trojans visit.

Never again: Every Pac-12 South opponent that the Trojans played in 2014 had at least eight days to prepare for the Men of Troy… Whoa Nellie!

The last word: Well, that didn’t take long. UCLA freshman receiver Cordell Broadus, the son of rapper Snoop Dogg, has quit the UCLA football team before his career has even started. It is well known that Snoop is a huge USC fan, and it’s rumored so was his son. So I guess we’ll have to modify that old crosstown rivalry by saying, “You’re a Bruin on National Letter of Intent Day, but a Trojan at heart for life.”