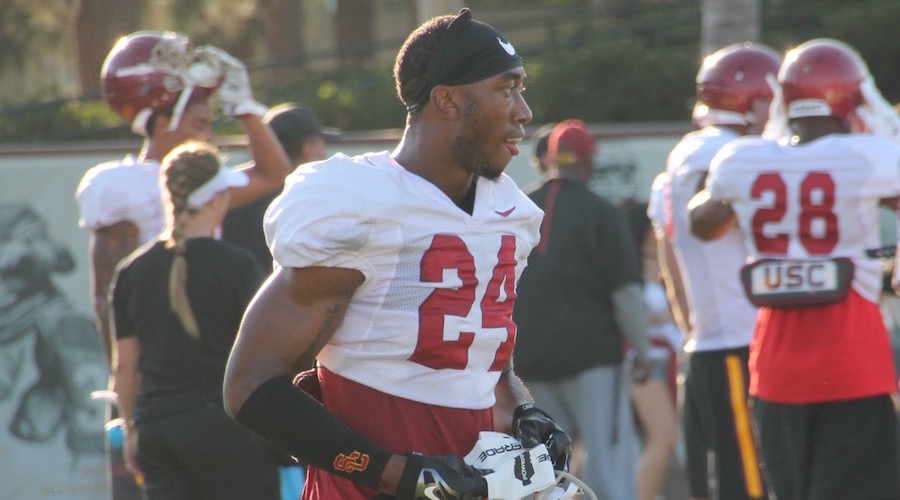 The early bird: Although it would be foolish to draw any major conclusions regarding the first three days of training camp, it would be reasonable to make some candid observations. It would be fair to say there is little to separate junior Max Browne and redshirt freshman Sam Darnold in the quarterback derby; the offensive line is off to a good start; the overall defense is flowing to the ball without much hesitation in Clancy Pendergast’s new system; questions regarding the D-line remain in play; the overall team effort and motivation is excellent; and Clay Helton’s 2016 Trojans appear intent in turning a difficult schedule into an inspiring challenge.

The early bird – Part 2: In a less publicized competition battle, Clay Helton has indicated that the center competition featuring juniors Toa Lobendahn and Nico Falah is intense and fluid and Toa has not solidified his starting spot. Although the O-line has received early praise, is it a question of its high level of play or the fact the defensive line validates previous concerns? Senior tailback Justin Davis is having a marvelous early camp as is junior wide receiver Steve Mitchell. There should be concern regarding the potential turf toe of junior All-America wide receiver candidate JuJu Smith-Schuster. All-Pac-12 junior corner Adoree’ Jackson has been impressive, and quietly senior linebacker Michael Hutchings has asserted himself.

The early bird – Part 3: The fact that sophomore inside linebacker Cameron Smith says he is 100 percent. At least in the first three practices, Smith certainly doesn’t move like somebody recovering from ACL knee surgery. It would be safe to say that it would be a surprise if Cameron doesn’t start against Alabama.

The answer key: Clay Helton announced on Friday that the Trojans are scheduled to hold three scrimmages, which will be a heavy factor in naming a starting quarterback. The coach said he wants to see how the quarterbacks react to “live bullets” and the coaches on the sidelines.

Noticeable: Watching Trojans training camp devoid of music really changes the overall environment, which does affect a more serious atmosphere. There is a much more business and teaching environment as opposed to the “cool” element under the previous Kiffin and Sarkisian regimes. When talking about USC tradition, it has been refreshing to return to the workmanlike and blue-collar determination rather than the glitz and glamour that seemed to turn practice into a party rather than a football practice.

Tide talk: With a what looks to be a newfound, together attitude on the team in training camp, how much does playing Alabama in the opener change the dynamic of the Trojans as compared to opening last season against Arkansas State? Junior safety John Plattenburg (above photo) says, “I wouldn’t say it (attitude) has anything to do with Alabama, it’s just something we wanted to work on as a team. We knew about our past when teams used to say, ‘We’re going to play SC and it’s going to be a challenge.’ That’s something we feel we didn’t have the past few years. We’re trying to recapture that attitude, that fear, and when we lock the gates at the Coliseum, we want teams to fear us.”

Tide talk – Part 2: Regarding Alabama, John Plattenburg says, “It’s the opportunity to compete with the best of the best. They have a great team, great coaches, and they’re national champions, so I’ve got to give them credit. But I am waiting for the opportunity to compete and see. No matter how the game goes, I think we will do great and they will do great because we are two good teams. We have a lot of potential to do a lot of things this year.”

The conversion: Ask him about his switch from offensive to defensive lineman, junior Khaliel Rodgers says, “I feel comfortable to be honest. It’s not really a difficult move, so I’ve been doing great so far. I just have to go out there and help my guys, help my team, make plays for the team. That’s all I want to do.“

The conversion Part 2: And how does Khaliel Rodgers feel about playing Alabama in the first game and going up against one of the best offensive lines in the country? Khaliel says, “I think we take every game as the biggest game to be honest. I know they are in the Top Ten (No. 1), but honestly we’re just taking it with the same focus that we do when we’re playing somebody else. We just got to bring it and go hard.”

Alabama challenge: Other than Matt Leinart’s debut at Auburn in 2003, has any first-year Trojans quarterback had to face a bigger first-game challenge than playing in No. 1 and defending national champion Alabama on the road?

Practice reminder: Monday night’s Trojans practice (5 p.m.) will be held in the Coliseum and is open to the public. Although practice will probably end around 7:30 and it will be sunset, maybe we’ll be a chance to see what the new NFL Coliseum lighting is all about.

Bowled over: The University of Oklahoma football stadium has completed renovations, and the big difference is that the south end zone is no longer a Coliseum-like sun deck but a connected wraparound with rest of the stadium. It now has a very intimate and intimidating bowl look. Couldn’t the Coliseum renovation plans be revised to do the same renovations as Oklahoma and still preserve the historic peristyle end? By restricting the height of the “wraparound,” it could still preserve the view of those peristyle icons, the famous arches and torch.

The report card: According to reports, the plans to renovate the Coliseum will have no alternate designs, which means you’d better enjoy the original Coliseum before the press box side gets neutered. There has to be some way to renovate the Grand Old Lady without such a drastic surgical incision.

Hello Larry: Pac-12 commissioner Larry Scott might want to steal this new idea from the Big 10, which will have a new pregame show entitled the “BTN Tailgate.” It’s really a replication of ESPN’s GameDay. The BTN will take its 2016 college football pregame coverage on the road and do a live, 90-minute show originating from a different Big Ten campus each week during conference play.

Attention Clay Helton: The Division I Football Oversight Committee has endorsed a proposed guideline to reduce the recommended number of live-contact practices that teams conduct each week from two to one.

More Helton: Every Trojans coach has some sort of expression or motto reflecting how they want their program to be identified. Clay Helton is no exception. On one of the inside walls of Howard Jones/Brian Kennedy Fields reads “Faith, Family, and Football.”

Alijah-a-comin’: Highly sought after offensive prep tackle Alijah Vera-Tucker (Oakland, Calif./Bishop O’Dowd) has announced for the Trojans. FYI, Alijah is listed at 6-feet-4 and 284 pounds. He was offered by a number of biggies such as Michigan, UCLA, Nebraska, Oregon, and Texas A&M. Alijah is ranked No. 47 in the ESPN Top 300.

Wake up the Echols: As announced on Friday, defensive end Hunter Echols (Los Angeles Cathedral) committed to the Trojans. What makes this “get” the sweeter is Hunter recently de-committed from UCLA to verbal to Troy. Echols (6-4, 235) is ranked No. 89 in the ESPN Top 300. And BTW, Hunter was also offered by Alabama.

Planting another Sunshine flag: Tampa (Fla.) Plant High athlete Juwan Burgess (6-0, 185) gave a verbal pledge to USC during an announcement ceremony this past week. Of note, Burgess, a DB/WR, is from the same school that really began the Trojans almost yearly snatching of Florida prep stars or have you already forgotten former USC explosive wide receiver Mike Williams?

The McDonald factor: Matt McDonald, son of former Trojans All-America quarterback Paul McDonald, is expected to be the starting quarterback for powerhouse Mission Viejo (Calif.) High this fall. The senior is a transfer from Santa Ana (Calif.) Mater Dei. McDonald was the starting QB for Mater Dei last season until he was sidelined with an arm injury in the second game. McDonald was then replaced at MD by J.T. Daniels, a freshman, who is now a highly recruited sophomore prospect.

Upon further review: Every spring, all the Division I Instant Replay Officials from around the country meet as a group to work on perfecting the instant replay process. This year’s meeting focused on the 2016 rule change that expanded the role of the instant replay in targeting fouls. Let’s hope the time of deciding a replay ruling in the Coliseum doesn’t take as much waiting to give and receive your order at an In-N-Out drive thru.

The last word: The press guide: Although it’s informative in the Internet version, I’d highly recommend getting a hard copy of the 2016 USC Football Media Guide. For those interested in purchasing a hard copy of the guide, they’re available by mailing a $20 check to: USC Sports Information Office, HER 103, Los Angeles, CA 90089-0601. And, no, I don’t get a commission.