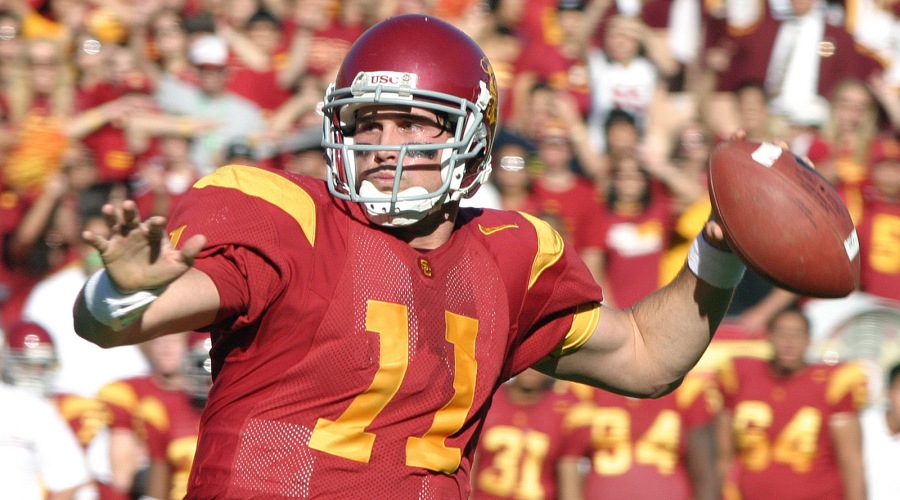 The hall truth: Trojans Heisman Trophy winning quarterback Matt Leinart has been nominated for the College Football Hall of Fame, and isn’t it a no-brainer that he get elected on the first ballot?

Safety first: The Thorpe Award, given to the nation’s top defensive back, has just one Trojan recipient, Mark Carrier, who has also been nominated for the College Football Hall of Fame. Carrier, a two-time first team All-America, does not have a national championship under his belt, which could cause some inexcusable voters to hesitate.

Safety second: Although he has no Thorpe Award, former two-time Al-America safety Dennis Thurman has too been nominated for the College Football Hall of Fame. Besides his individual credentials, Thurman does have a national championship under his belt as a team member of the 1974 Trojans. Will he get in? He could have an easier time than Carrier because of his team’s success, although both are deserving.

Crossed fingers: With the Pac-12 Networks also television football games this season at 11 a.m. local time, the Trojans are hoping that this utterly ridiculous kickoff time doesn’t affect them later in the season. If it does happen, it probably won’t be for a Coliseum home game, although nothing is guaranteed in the world of the Pac-12 Networks.

Crossed fingers – Part 2: For those that need to know, Pac-12 teams that have been selected for the dreaded 11 a.m. starts are Washington State hosting Portland State (Sept. 5), a spilt telecast on Sept. 12 featuring Sacramento State at Washington and UMass at Colorado (12 noon MT), and Oregon entertaining Georgia State (Sept. 19).

Another Rose Bowl prediction: Lindy’s national magazine is predicting that the Trojans will play Michigan State in the 2016 Rose Bowl.

The score: Lindy’s joins Athlon and The Sporting News in predicting the Trojans will in Pasadena on New Year’s Day against Michigan State.

Wide out: It should bear scrutiny when it comes to the Trojans recruiting of a very talented wide receivers class. Sark and Tee Martin could bring in six receivers if necessary, and there is plenty of talent out there if that possibility presents itself.

Tackling the quote book: In an excellent interview by WeAreSC writer Johnny Curren of committed Trojans offensive tackle Nathan Smith, Smith said, “In making my decision I just assessed my priorities and what I was looking for in a school, and USC was the school that came out on top. It was all the connections that I could make in Southern California, the weather and the coaching staff.” And was a refreshing exercise in critical thinking skills, IMHO.

Spring ball 2016: Nathan Smith revealed his plans on entering Troy early and participating in spring ball. Big Nate also told Johnny Curren, “Really, I kind of just want to get to college as fast as I can. It’s just a giant head start. I think it will really help in the long run. I just have to take one English class, I believe, in the summer to make it happen.”

Question: Why are we all obsessed with knowing what numbers the incoming Trojans freshmen football class will wear? Because we all know that a player wearing a number he loves will have a comfort zone and it’s his identity.

Wittek wins: Former Trojans quarterback Max Wittek was confirmed as the University of Hawaii quarterback for 2015. Wittek has one season to show his stuff, and if it’s good enough, it would certainly help the job security of his head coach, former Trojans offensive coordinator Norm Chow, who is under the gun from the restless Islanders.

Holiday planning: I was in San Diego last weekend for a retirement dinner for a television buddy of mine and ran into a high-ranking official from the Holiday Bowl. In our conversation, the Holiday Bowl official emphasized how badly they’ve wanted the Trojans over the years to play in their game, which of course happened last December.

More Holiday: The high-ranking Holiday Bowl official agreed with me that the Holiday Bowl would fit nicely on New Year’s Day if given the invitation.

Viva Las Vegas: The Royal Purple Las Vegas Bowl and ESPN have announced that the 24th edition of this underrated bowl game will be played at 12:30 p.m. Vegas time on Dec. 19 at Sam Boyd Stadium and will be televised on ABC. The game will again feature the Pac-12’s 6th pick against the top choice from the Mountain West Conference or BYU.

The betting line: The respected 5Dimes oddsmakers are predicting the Trojans to finish with 8 ½ wins in 2015, which should give pause for thought as it pertains to the media bandwagon of the Trojans being a College Football Playoff semi-finalist.

IMHO: I am in agreement with ESPN columnist Mark Schlabach that the Trojans have five tossup games in 2015: Stanford (home), ASU (road), Notre Dame (road), Oregon (road), and UCLA (home). If Sark’s men can navigate these obstacles, it could get exciting from a Trojans CFP perspective.

Pizza pizza: They tell me that you won’t regret going to one of former Trojans quarterback Brad Otton’s pizza joints called “Settebello.” I have put it on my cuisine bucket list, and WeAreSC publisher Garry P. gives Otton’s place high cuisine marks.

More Otton: Brad Otton may now be known now for delicious pizza, but for many Trojans fans he will be remembered as a standout quarterback in the Trojans exciting 41-32 victory over Northwestern in the 1996 Rose Bowl. All Otton did was explode for a career high 29 of 44 passes for 391 yards and two touchdowns tosses.

Last add Otton: What is forgotten about Brad Otton is that the season before the Rose Bowl trip, Brad helped the Trojans along with starter Rob Johnson to a 55-14 trouncing of Texas Tech in the 1995 Cotton Bowl. Otton finished the Cotton Bowl by going 8 of 14 for 146 yards and a touchdown pass.

IMHO: I am probably in the minority here, but I am disappointed that ESPN college football analyst Mark May has reportedly been reassigned and will no longer be part of ESPN’s postgame college football show this fall. I liked his openness and candid comments, and how could anybody maintain focus and integrity with Lou Holtz as your partner?

Father’s Day special: The Trojans are offering a Father’s Day special. For either the Arkansas State or Idaho home games, you can take dad behind-the-scenes with a pregame locker room tour, which includes a specialized locker room nameplate just for him and receive a signed poster from head coach Steve Sarkisian. The package also includes two VIP tickets to the game, two Cardinal & Gold Party tailgate passes, and a parking pass. All for just…$245.00 per ticket with a limit of two packages per customer.

Father’s Day special – Part 2: One thing missing in the Father’s Day package is a post-game father-child football catch on the Coliseum grass following the conclusion of the game. Oh, that’s right, the Arkansas game, which kicks off at 8 p.m. PDT and should end around 11:30 p.m., which means the “Father’s Day Catch” probably wouldn’t start until after midnight. So much for that idea.

The final word – New University of Texas president Greg Fenves says he is in favor of allowing beer sales at football games to enhance the fan experience, citing that beer sales at other UT sporting events show no evidence of a security problem. Well, Trojan fans, don’t hold your breath that Trojans athletic director Pat Haden is about to lift the ban on beer sales at the Coliseum for USC events, and I would completely support Haden on that decision.