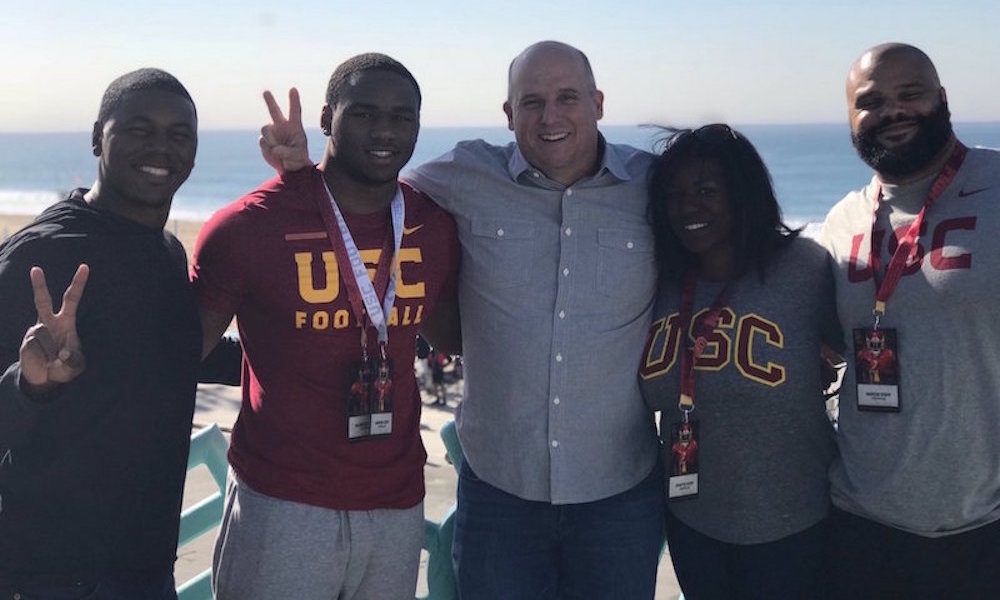 No news is good news: Although it’s part of the trade, it’s remains an unseemly practice in college football that after national signing day, assistant coaches, who gained the trust of their eventually signed recruits, move on to a new school or advance to the NFL. This, however, appears not to be the case under Clay Helton’s watch at USC. Helton prides himself on a stabilized staff, and the only departures from the 2017 coaching group came before signing day –  quarterback coach Tyson Helton to the University of Tennessee and running backs coach Deland McCullough to the NFL, a move that in the end didn’t affect his targeted Trojan recruit, running back Markese Stepp (above photo) from Indianapolis, Indiana.

No news is good news – Part 2: However, on the other side of town following signing day, UCLA offensive line coach Hank Fraley has departed Westwood to become the assistant offensive line coach with the Detroit Lions and although he is still officially listed on the UCLA athletic site as the Bruins’ tight ends coach, Angus McClure has been widely reportedly to have accepted a job as assistant head coach and offensive line coach at Nevada.

The extension: It was announced this past week that Trojan offensive coordinator Tee Martin and defensive coordinator Clancy Pendergast have been given contract extensions, which prompted head coach Clay Helton to say, “To have two of the best coordinators in the industry back for their third consecutive seasons is a critical piece for our team’s growth and our opportunity for success next season.” Continuity is usually a good thing, no doubt. However, how do these extensions affect the chemistry of the remaining staff members?

It’s a process: Now that Tee Martin and Clancy Pendergast have gotten their extensions, what contractually becomes of recruiting coordinator/linebackers coach Johnny Nansen and defensive line coach Kenechi Udeze? Nansen was recently named the Pac-12 Recruiter of the Year by one rating service, which prompted a press release from the Trojans’ athletic department. Well earned by Nansen but is his contract simply a case of waiting in line while taking care of Tee Martin and Clancy Pendergast in the pecking order?

BKU: And it’s been eerily silent regarding the rumor of d-line coach Kenechi Udeze departing to the NFL and the San Francisco 49’ers in particular. On signing day, Udeze sent out a tweet to a major signed d-line recruit and the inference gave the impression that “BKU” would be returning. However, this “rumor” has not been addressed, but perhaps a contract announcement or at the very least a reaffirmation of Udeze’s return would put some uneasiness to rest.

BKU – Part -2: Perhaps the biggest evidence of Kenechi Udeze’s return to Troy was the late week announcement that Florida Atlantic defensive coordinator Chris Kiffin, brother of Lane Kiffin, was leaving for a defensive line coaching position with the San Francisco 49ers, the open position that most believed that Udeze was reportedly interviewed twice.

The line: For most astute USC football fans, aside from the quarterback competition, the scrutiny heading into spring ball should be focused on the offensive line. There won’t be a Sam Darnold helping to avoid disaster. The Trojans have enough offensive line bodies, and some of those bodies have a lot of experience. Obviously, last season’s group had some very inconsistent moments, especially when facing physically powerful defensive lines like Notre Dame and Ohio State. Come 2018 spring ball in two weeks, all spring eyes will be on both the players and O-line coach Neil Callaway to see if this group will become more physical and efficient unit than in 2017.

Help wanted: Still no word on a new running backs coach, but in the overall context of things, you should be assured that the void will be filled before the start of spring practice. The Trojans should be so lucky to get another Deland McCullough.

IMHO: Not that the effort wasn’t there, but the Trojans could have used a quality offensive lineman or two added to the outstanding Class of 2018.

Due process: With the unfortunate news that sophomore wide receiver Joseph Lewis’ future as a USC football player is in doubt because of an alleged domestic violence event, if past events of this nature are any indications, it looks like next man up.

The bill: There is a California bill on the table that would ban tackle football until a player enters high school. I understand the reasoning as it pertains to safety, but how much would it really reduce head injuries? Actually, the high schools that would strongly feel the effect of such a bill would be those high schools that have their local Pop Warner teams running their systems on both sides of the ball. Many of those community Pop Warner teams have former players from the local high school in charge.

Farewell: Best of luck in the future to redshirt junior-to-be center Cole Smith, who has decided to hang up the cleats due to reported arthritic knees and because of a patellar dislocation. Cole is the son of former Rams center and USC assistant coach Doug Smith and former Mission Viejo High star.

Next man up: With the retiring of Cole Smith, it would appear that there will be intense competition for the starting job between Toa Lobendahn, the expected starter, and returning freshman Brett Neilon and true freshman Justin Dedich, who is already enrolled in the spring semester.

A shot in the arm: Former Trojans All-America tackle Tony Boselli did not make the NFL Hall of Fame in this season’s balloting, but his humanitarian efforts in Florida revealed that there is more to the man than just making the HOF. This past week, Tony’s Healthy Schools was offering free flu shots in the Jacksonville area.

The Kiffer: FYI, the head coach of the Trojans – as if you’ve already forgotten – during the 2011 and 2012 seasons was Lane Kiffin.

For the record: With the Notre Dame 2012 forfeit to the Trojans, Lane Kiffin’s Men of Troy now finished the season 8-5. Of course, the 2012 season concluded with that embarrassing 21-7 loss to Georgia Tech in the infamous El Paso Sun Bowl.

Going down: FBS games (including neutral-site and bowl games) averaged 42,203 fans in 2017, a drop of 1,409 fans per game from 2016. It is the fourth consecutive year that FBS attendance has dropped year over year and, at 3.2 percent, it is the largest average drop since 1983.