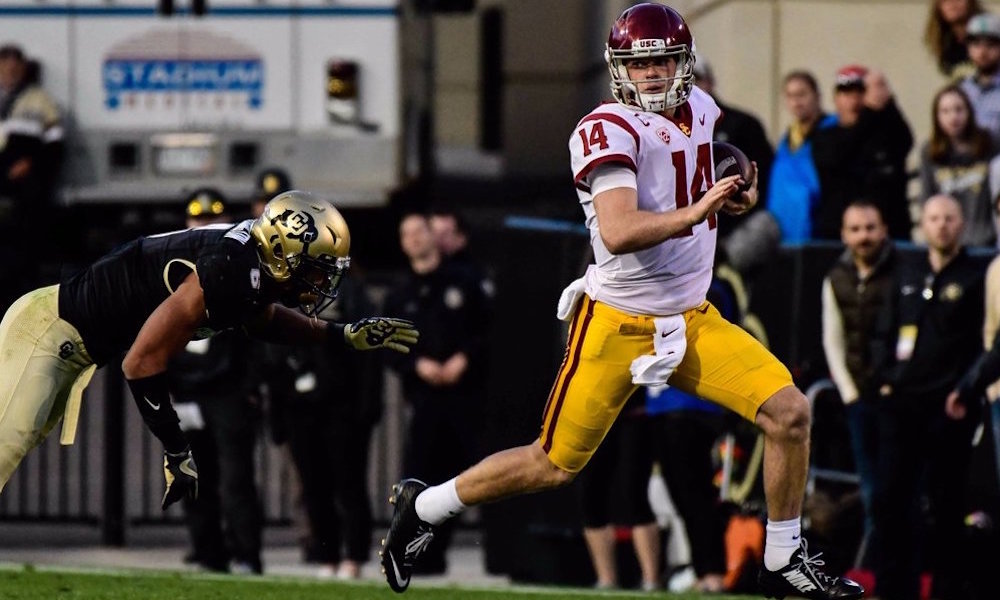 IMHO – Part 1: Hmm, have nothing planned for Friday night, Dec. 1? Looking for some extra cardinal and gold gridiron excitement and a mini-vacation in the romantic Bay Area right after the Thanksgiving weekend? Here’s a suggestion: For the second time in three seasons, the new No. 12 USC Trojans (9-2, 7-1 Pac-12 South) are returning to the Pac-12 Championship Game on Friday night (5 p.m. PT), Dec.1, in Santa Clara. With the Men of Troy capturing the Pac-12 South Division title on Saturday afternoon by way of a 38-24 triumph at Colorado, at least one preseason expectation has now been met, and the challenge of conference title is next on the preseason checklist. And BTW, have you already checked airline flights and hotel reservations? A reminder for tickets to the Pac-12 title game, today (Sunday) is the deadline day for Trojans season ticket holders to get priority seating in the designated USC sections of Levi’s Stadium. Oh, and before we get too conference championship distracted, don’t the Men of Troy have a little crosstown confrontation next Saturday evening (5 p.m. PT) in the Coliseum against some school that wears blue and gold?

Quarterback: Sam Darnold (photo above) may have played his most complete game of the season against Colordao and looked like the quarterback that was so highly acclaimed in the preseason. The good news is that Sam (21-of -34-0 PI, 329 yds./ 2 TDs, 31 yds. rushing/1 TD) had no interceptions and no turnovers. All in all, a great day for No. 14. And did we mention Sam’s 24-yard weaving TD gallop? After the game, even Trojans’ offensive coordinator Tee Martin told the media that Darnold is ready for the NFL.

Running backs: Junior tailback Ronald Jones (146 yds./1 TD) must now be considered as one of Troy’s greatest running backs (3293 career yds.), having surpassed former Heisman Trophy winner Mike Garrett’s career rushing numbers (3221 yds.). RoJo, who could next pass O.J. Simpson’s career rushing mark (3423 yds.) is truly running like a future high NFL draft pick. On Saturday against Colorado, Jones made holes where there were no holes. That fourth quarter 22-yard, improvised field reversal scoring jaunt is nearly as good as it gets.

Receivers: The young Trojans receivers continue getting better and better, thanks to the continued growth of Tyler Vaughns (90 yds.) and Michael Pittman (59 yds./ 1 TD). And the old vets like Deontay Burnett (79 yds./ 1 TD) and Steven Mitchell (90 yds.) made it a difficult day for the Colorado secondary. Once the Trojans get tight end Daniel Imatorbhebhe back in stride, look out. Ask Colorado about the Trojans’ improved receivers.

Offensive line: The offensive line was workmanlike, but again had trouble with short yardage situations and consistently opening holes. Because of Sam Darnold’s elusiveness, the O-line was bailed out on more than one occasion.  There were also too many penalties on offense both on execution and controlling emotions. Procedure and unsportmanlike conduct flags were killer. If the Trojans are going to end the season with 11 wins, this group has to continue to improve, so help me Neil Callaway.

Offensive bottom line: No question when the Trojans’ offense wants to turn it on, they certainly can do it. Late in the fourth quarter, the Trojans seemed to have time management issues in keeping the clock rolling. For example, the Trojans elected to throw into the end zone twice when all that was necessary were first downs to keep the clocking moving. However, both times the throws were incomplete, which, of course, stopped the clock and gave Colorado time they should never have been given. At this point, the Trojans didn’t need more points. They needed to drain the clock.

The defensive front: For the most part, the defensive line, which led the nation in sacks coming into Saturday’s game, had just one sack on Saturday afternoon. However, they kept the pressure on Colorado quarterback Steven Montez for most of the game. They  also helped keep Colorado running back Philip Lindsay in check (68 yds.).

Linebackers: There was some outstanding play by linebackers Ucheena Nwosu, Cameron Smith, and by leading tackler John Houston Jr. Nwosu continues to swat down passes at the LOS like King Kong knocking down airplanes from atop the Empire State Building. Junior and co-captain Cameron Smith continues to show why he a post-season finalist for various defensive awards.

Secondary: It was a good news/bad news scenario. The good news was the play of Ajene Harris, who had a 34-yard Pick-6 and almost had the defensive play-of-the-year when he intercepted Colorado QB Steven Montez (376 yds./ 2 TDs) a second time late in the fourth quarter and attempted to lateral the ball for another touchdown. Unfortunately, Harris’s knee was ruled downed before the pitch and the TD was nullified. On a negative note, Trojans’ sophomore DB Jack Jones was again the target of the opponent’s offensive coordinator, and Jones responded by being burned twice on Colorado TD receptions (79 yds./57 yds.). Jones also had an unsportsmanlike penalty in the game, as well. It was, needless to say, a challenging game for Jack Jack.

Defensive bottom line: The first half performance of the Trojans defense was simply outstanding, which rewarded the Cardinal and Gold with a 20-0 halftime lead. However, the Trojans were outscored by Colorado 24-18 in the second half, as areas of the defense broke down and the players seemed to tire from the altitude. Regardless of the altitude, this continues to be a disturbing pattern.

IMHO special teams: Two true freshmen Trojans, Brandon Pili and Austin Jackson, separately blocked critical Colorado field goal attempts while true freshman placekicker Chase McGrath converted a 26-yard field goal. So much for the good news. However, the Trojans also had a punt blocked and McGrath missed both a field goal and a PAT attempt. Obviously, Chase’s groin injury contributed to his uncharacteristic misses, especially the PAT. Give credit again to punter Reid Budrovich, whose directional punting limited any serious Buff runbacks. BYW, did you notice that WR Tyler Vaughns was back on some punt returns?

Special teams bottom line: A mixed bag of good and not so good.

Clay Helton comments on winning the Pac-12 South: “Congratulations to a bunch of great kids, players win games. We want to win championships around here. We didn’t get this opportunity last year, and it was a mission of ours to be able to do that this year to represent the Pac-12 South in San Francisco. To accomplish that on Nov. 11th  right now and to know we’re going there (Santa Clara) speaks volumes to the kids we have around us.”

Trojans head coach Clay Helton comments on Sam Darnold: “I’ve really enjoyed his (Sam Darnold) leadership, whether it’s good times or bad. When you’re the quarterback at USC and to have that much pressure on you and do it with so much class and character on a weekly basis, whether things are going good or bad, and perform for his brothers. He’s the definition of believing in the team’s success over individual success.”

Clay Helton comments on the future: “There’s still a lot out there that we have to get ready for (UCLA and the Pac-12 championship). We’re going to celebrate tonight and go back to work tomorrow.”

Colorado head coach Mike MacIntyre comments: “We made some critical mistakes and we gave them the game,” (USC is) the most talented team in our league year in and year out, no doubt. We had some opportunities tonight and squandered it away.”

The believer: Knowing that No. 1 Georgia had lost and with visions of getting back into the national championship picture, Trojans star tailback Ronald Jones was asked about the odds of his team getting a shot at a national championship invite, Jones said, “I think it’s looking pretty good. I feel like we can sneak back in there.”

The believer – Part 2: Asked his opinion of the national championship situation, Trojans’ linebacker Cameron Smith said, “I think we’ve got to look forward to UCLA and the Pac-12 championship, and that’s all we can take care of. Whatever happens after that — it’s everyone’s dream to play in a playoff. But we’re living in the now.”

The big pick: On his TD interception in the late in the second quarter, Ajene Harris said, “They already tried to hit me with a route off a rub, so I had an opportunity to jump the ball and that’s what I did. It helped my team out.”

Another point of view: On the critical Ajene Harris TD interception, Colorado quarterback Steven Montez said, “I really didn’t even see (Harris). I thought he was with the pick guy. They kind of ran into each other. But he made a good play.”

Sam says: On playing his first game of the season with no-turnover game, Trojans quarterback Sam Darnold said, “It means a lot. Whenever I can play a really clean game, it’s always nice and I am sure the defense loves it too. It’s good knowing it’s not going to be a quick turnaround, and they (the defense) can sit right down and not have to get right back up and play again. So, it was good to sustain some drives there and not turn the ball over.”

The turnstiles: Attendance for Saturday’s game at Folsom Field, which was CU’s final home game of the regular season, was announced at 49,337.

Weather report: The Folsom Field weather was 59 degrees at kickoff.

Bowling: There is a general sense that if the Trojans can win the Pac-12 title, its bowl game designation will be either the Cotton Bowl (Dec. 29) in Arlington, Texas, or the Fiesta Bowl (Dec. 30) in Glendale, Arizona. I’ll predict the Fiesta Bowl against…Ohio State or TCU.

Looking ahead: With the Trojans the confirmed Pac-12 South representative in the conference title game and drawing a bye the week before the conference title game week, it means Troy’s North Division opponent will have a short practice week since the title game is on a Friday. North contenders Washington and Washington State will play Saturday, Nov. 28 as will Stanford, which is hosting Notre Dame. Both games will be physical slugfests, which bodes well for the well-rested Trojans.

Slight increase: Against Colorado, the Trojans scored 38 points. Prior to the Colorado game, the Trojans were averaging 35.2 points per game.

Slight decrease: Against Colorado, the Trojans allowed 24 points. Prior to the Colorado game, the Trojans defense was allowing 26.7 points per game.

Slight increase: Against Colorado, the Trojans rushed for 209 yards. Prior to the Colorado game, the Trojans were averaging 201.2 rushing yards per game.

Major decrease: Against Colorado, the Trojans allowed 34 net rushing yards. Prior to the Colorado game, the Trojans defense was allowing 171.7 net yards rushing per game.

The last word: It’s now officially UCLA week, so cover all things cardinal and gold and hide the children.