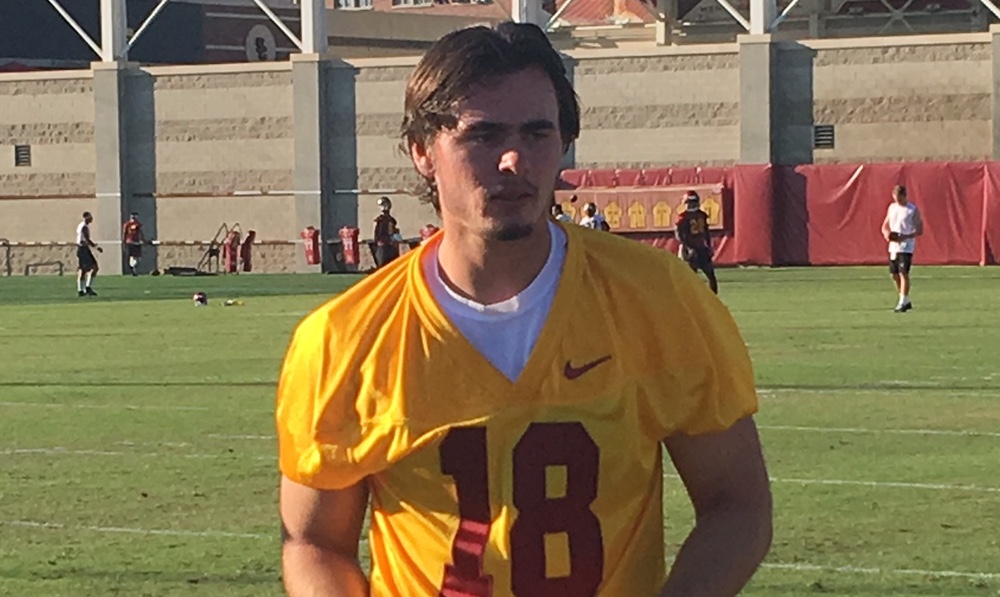 The process (UPDATED): Regarding the actual quarterback selection process, Clay Helton said, “We had a very healthy quarterback competition this year with four incredible young men. All are tremendous people, teammates and football players. In the end, J.T. has earned the starting position and will be the starter against UNLV.  As you can imagine JT was excited when we let him know, but his uncanny maturity kept him focused on what is next.  Matt (Fink), Jack (Sears), and Holden (Thomas) handled the decision with class and grace as I expected, and I reminded each that they need to keep pushing to be ready to play when called upon. After this camp we have no doubt that each one can lead our team when asked to do so.  All are eager to keep working hard.”

IMHO Offense depth chart prediction – Part 2: Besides being the most gifted, Daniels gets the UNLV start at QB because he has shown in scrimmage situations and in practice he can move the team to score more efficiently than his competition, although both Matt Fink and Jack Sears performed admirably in training camp. Another consideration is would you rather start Daniels against UNLV and allow him to gain invaluable experience or throw him into the lion’s den as a starter at Stanford and/or at Texas or coming in relief? It would seem to be a no-brainer. We believe if Daniels starts at the beginning of the season, it would position the Trojans’ offense to much more production for the balance of the schedule. Would we be shocked of Daniels isn’t the UNLV starter? No, not really, and we think Fink is the more likely candidate to start if Daniels doesn’t.

IMHO Offense depth chart prediction – Part 3: Sophomore Carr is the most talented of the running backs, but he has been brought back slowly after back surgery and missed spring ball while senior Ware has been outstanding from spring through training camp. While Helton says that the best player plays, it seems that if all things are equal, he goes with the upperclassman who has paid his “dues,” so that’s why we believe that Ware at least starts in Game 1. FWIW, sophomore tailback Vavae Malepeai could start for many teams and will be a factor.  Changing positions, we believe that true freshman St. Brown has been so good and so productive and so dangerous that he has earned his way into a UNLV starter, although no great shock if Jones gets the nod over St. Brown since Jones is the veteran. The O-line pretty much seems set, and the only question – and it’s a huge question – is this the season that the men in the pit physically step up?

IMHO defensive depth chart prediction – Part 2: The starting D-line is based on a three-man front, and there’ll be no shock here if we see a four-man front at some point that includes Brandon Pili, Jay Tufele and Marlon Tuipulotu. It should be noted that Porter Gustin is a wild card starter for UNLV since he’s still recovering from knee surgery. Gustin looks to be healing very quickly, but the Trojans might want to play it safe and save Porter for Stanford.

IMHO defensive depth chart prediction – Part 3: There’s a chance that up and coming redshirt freshman DB Greg Johnson could be a UNLV starter opposite Iman Marshall. Johnson has really been impressive and has drawn the praises of DC Clancy Pendergast. Although he won’t start against UNLV, look for true freshman linebacker Kana’i Mauga to really push for a starting spot throughout the season.

IMHO Season prediction review: Having seen enough of training camp and the first couple of scrimmages, we’ll stick with our earlier season prediction of either 9-3 (losses at Stanford, at Texas, Notre Dame) or 8-4 (losses at Stanford, at Texas, at Utah, Notre Dame). One can make the argument that the trap game is at Arizona, which could obviously also affect the final regular season record.

Herbie predicts: ESPN’s crack analyst Kirk Herbstreit predicts the Pac-12 champs will be Washington over Utah in the title game with Arizona being the “Sleeper.”

Herbie predicts – Part 2: If you look at Herbstreit’s prediction in its entirety as it pertains to the Trojans, he’s basically predicting that Utah and Arizona are the Pac-12 South Division leaders, probably because the Trojans play both the Utes (Oct.20) and the Wildcats (Sept. 29) on the road.

Jersey heritage: The Trojans are the only FBS school to never have had surnames on the back of their jerseys.

Cap and gown: The 2018 Trojans currently have 19 players who graduated a semester early from high school and enrolled at Troy this past spring.

Scouting report: If you want an early scouting report on the No. 13 Stanford Cardinal, tune in next Friday night when the Cardinal play at San Diego State on FOX Sports 1 at 6 p.m. PDT.

Food and music: The first Trojan Marching Band Tailgate is next Saturday, Sept. 1, before the UNLV game at Hancock Park South Lawn on campus. Join the TMB for Cajun-themed food and celebrate Dr. Bartner’s birthday. The menu includes blackened chicken, Bayou sausage, Pasta Big Mamou and a variety of salads and desserts while enjoying a performance by the Trojan Marching Band. Doors open at 7:00 a.m. RSVP at https://sait.usc.edu/band/tailgate/

Tailgating reservations: Tailgate Guys is a company that considers itself the nation’s biggest organizers of tailgating. USC has enlisted the company for games catering to all tailgate sizes. There are packages that include premium reserved USC game tailgate locations such as the Coliseum (Christmas Tree Lane); bellhop and unloading services upon arrival; tents, tables, chairs, and television package services; coolers with ice; food and beverage catering options; and equipment clean up and breakdown. Tailgate packages are currently available for reservation. To learn more, please visit TAILGATE GUYS WEBSITE or contact Zach Gano at ​(213)255-9025 or ​ [email protected].

Time for Monday lunch: The popular Monday Morning Quarterback lunches return this season. You can lunch and watch film playbacks narrated by Clay Helton and enjoy a Q & A session with a guest football player, Coach John Robinson, and Fox Sports Analyst and WeAreSC contributor John Jackson. The luncheon and program will be held in the Founders’ Room at the Galen Center. Time of the MMQ is 11:15 a.m. for the luncheon and noon for the program. The Monday dates are September 10, October 1 & 22, and November 5 & 19. Individual costs are $45 for TAF members and $55 for non-members.

Tough break: Former Trojans All-America receiver Marqise Lee, now with the Jacksonville Jaguars, suffered what appeared to be a serious left knee injury on Saturday when he was illegally tackled (led by helmet) by Atlanta safety Damontae Kazee. Marqise was carted off the field grabbing his knee.

The last word: With a week to go before the Trojans’ season and home opener, here’s the latest Coliseum renovation real time photo update: https://app.oxblue.com/open/usc/lacoliseumrenovation