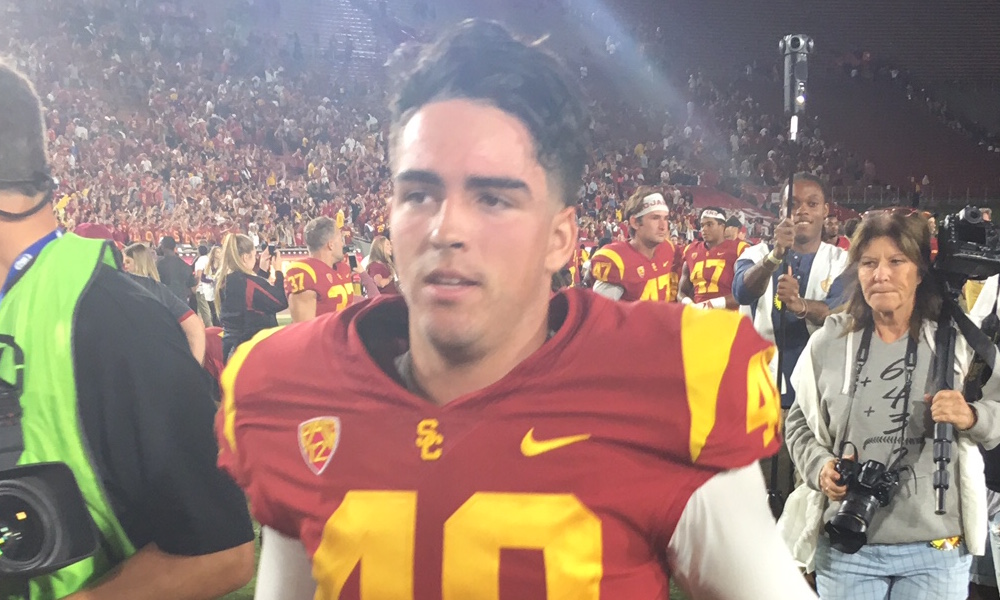 IMHO evaluation: I guess when you have Captain Comeback as your quarterback and Chase, his tagalong, walk-on placekicking buddy, all things are possible. A USC Trojans placekicking superhero was born on Saturday night in the Coliseum and a Heisman Trophy frontrunner’s superhero’s legend continued, as the No. 4 USC Trojans (3-0, 1-0 Pac-12), somehow, someway defied and denied the Grim Reaper of Upsets to miraculously escape a crushing loss with a thrilling 27-24 second overtime victory over a heartbroken Texas Longhorns team (1-2, 0-0 Big 12) before 84,714 fanatical Coliseum fans. With true freshman walk-on placekicker Chase McGrath (photo above) thrusting himself into the pantheon of USC placekicking lore with his regulation-ending 31-yard field goal and ensuing game-winning 43-yarder to end it in the second overtime and Trojans’ quarterback, Sam “Captain Comeback” Darnold, again doing his magic, it was a night to be remembered for a long, long time, especially by a shell-shocked University of Texas team, administrators, and their fanatical fans.

For Captain Comeback, he continues to enhance his cardinal and gold gridiron legend with a remarkable 8-play, 52-yard drive in 39 seconds, which set up the end-of-regulation field goal resuscitator by sidekick McGrath. Ya think the Penn State players watching the telecast knew basically what was about to happen – again? Along with a relentless Trojans’ defense that bent but never completely broke and brought magic at the Trojans’ goal line in the second overtime, the Trojans remain undefeated. It was all simply incredible as was the wall of sound inside one of the nation’s legendary sports edifices.

Offensively speaking: You knew it wasn’t going to be a 17-point favorite cakewalk when the Trojans couldn’t punch it in late in the first quarter with 4th –and-goal from the Texas 1-yard line, not to mention continuous dropped Darnold passes and the inability of the Trojans offensive line to even dent the Longhorns’ defensive front. For Sam Darnold, it was a roller coaster of success with 397 passing yards and three touchdown passes. However, No. 14 did throw two interceptions, one of which was a pick-six of 38 yards by UT DB Elliott DeShon, which tied the game at 7-7 late near halftime. The Trojans offense, however, did manage 468 yards against the Longhorns, but only 71 yards came on the ground, a major disappointment.

Defensively speaking: While the Trojans offense didn’t help take the pressure off its defense for much of the game, you have to tip your Trojan helmet to coach Clancy Pendergast’s defense for rebuffing the Texas ground attack time after time (68 yards rushing). The USC defense obviously tired in the final quarter and struggled in overtime to contain the suddenly aroused Texas offense, led by true freshman quarterback Sam Ehlinger, a native of Austin, who threw for 298 yards and two touchdowns. The Trojans had great difficulty containing the elusive Ehlinger, and the Longhorns’ receivers gave the USC defensive backs all they could handle. With a meager running game, the Longhorns still managed 366 yards in total offense and really took it to the Trojans in the air in the fourth quarter with some amazing receptions in the clutch. Honestly, the Men of Troy have work to do with their secondary, namely the corners, and improvements need to start soon.

Special teams speaking: In the locker room after the game, Chase McGrath’s teammates were chanting something along the line of giving McGrath a scholarship. Needless to say, many believed that the one area the Trojans were lacking for a true championship run was a proven placekicker. Folks, that question has been undeniably answered by McGrath. The Trojans appear to have a championship caliber placekicker at their disposal.

IMHO -The bottom line: Call them good and/or lucky, but the Trojans showed championship guts, character and poise, and now the balance of the season really gets interesting. It seems that all potential championship teams have games like the Trojans played Saturday night. Only the good ones survive and the Trojans survived.

Tackling the issues: On defense, linebackers Uchenna Nwosu and Cameron Smith led the Trojans in tackles with nine stops.

Trojans head coach Clay Helton comments: “Credit to our defense, I think for about three and a half quarters played phenomenal, helped us when the offense was struggling, keeping us in the game and keeping us ahead. Then down the stretch with Sam (Darnold) and Deontay (Burnett), I don’t think I’ll ever forget it in my life.”

Helton on placekicker Chase McGrath: “The young man there doesn’t play like a freshman. He was asked to do a job not once but twice. Once to send us into overtime, and then the second time to end the game. What an unbelievable job by Chase.”

Texas head coach Tom Herman comments: “Pretty heartbreaking loss to play with that much passion, energy and commitment, and love for the guy next to you. We turned it over four times and had issues with the snap and a couple costly calls. That was the plan (to blitz Sam Darnold). If we were going to go down, we were going to go down swinging.”

The hero: Afterward, placekicker Chase McGrath on his winning field goal said, “I just remember getting swarmed by everyone on the team. It’s such a brotherhood here.”

The hero – Part 2: Asked where he watched former Trojans placekicker Matt Boermeester kick the winning field goal against Penn State in the Rose Bowl, Chase McGrath revealed, “I was watching at my house. Obviously, I visualize it (a winning kick) when I can. Tonight was just awesome.”

Couldn’t look: Asked if he looked at the winning field goal attempt, Trojans co-captain and safety Chris Hawkins said, “I didn’t see it, I had my eyes closed. I heard the sound of victory and it’s pretty sweet. Even if he did miss, I knew we had more football to play. I am happy that he made it and he’s a wonderful kicker.”

Sam I am: Following the game, Trojans’ quarterback Sam Darnold said, “It’s a win. I don’t know where it ranks. It’s good to get a great win against such a great Texas team. We gave it all we had and they gave it all they had. It was a great win for our guys. We learned a lot of things about our offense – good things we’ve got to figure out and learn from them.”

The compliment: Of Texas quarterback Sam Ehlinger, Trojans linebacker Uchenna Nwoso said, “He’s a great QB, he’s a great player, very athletic. The calm that he had, able to play under pressure and get his team going and not get affected by things.”

Another view: Of the Trojans, Texas all-star linebacker Malik Jefferson said, “The big plays killed us. We shot ourselves in the foot.”

The block: On his crushing block to spring tailback Ronald Jones ll on his 56-yard touchdown reception from Sam Darnold to end the half, wide receiver Steven Mitchell Jr. said, “It was supposed to be a Hail Mary, but I saw the defender, and I knew if I made the block, Ronald would score. Tonight’s win helps bring our team together.”

Under attack: In describing the Texas defensive front, Trojans center Nico Falah said, “They’re a really good defense and really well coached. They brought some unique blitzes that we’ve never seen.  There was a little panic in the huddle (late in the game), but you can’t show your emotions and we have to take it play by play.”

More Nico: On Chase McGrath’s field goal to win it, Falah added, “I watched the Jumbotron (video board). I intentionally didn’t want to watch (it live).”

New Carr: Asked if he had ever played in a game like the one against Texas, Trojans running back Steven Carr said, “I’ve never played in a game like this. It was exciting, electric, it was questionable on both side, but we finished. They were very physical on defense. I could tell they practiced for us because eleven hats came to the ball. I watched the winning kick live standing next to my man Levi (Jones).”

Help and recover: On his recovery of the second overtime fumble recovery caused by defensive end Christian Rector that eventually led to the winning field goal, D-back Ajene Harris said, “I saw that the play before they called the quarterback sneak up the middle and I saw them line up in the same formation a second time and my guy did the same thing to block me and I tried to get to the quarterback to strip him too. I just seen the ball in the air and I had to go get it.”

The weigh-in: After departing their respective team busses upon arrival at the Coliseum, both the Trojans and Texas arrived on the field at the same time The Texas team was dressed in suits with orange ties while the Trojans were attired in their cardinal collared shirts and black sweats. It was an awkward moment as the Longhorns, chaperoned by a Texas Ranger, were ushered to an area near the sidelines to make way for the Trojans team to huddle on the “SC” logo at midfield. Both teams walked up the Coliseum tunnel together, but you could see there was some “chirping” going on between the two clubs.

Tunnel vision: Leading the Trojans out of the Coliseum players tunnel prior to kickoff was former Trojans All-American linebacker Rey Maualuga.

Cover boy: On the cover of the official USC/Texas game program was Trojans quarterback Sam Darnold.

Battle of the bands: Texas brought a limited number of their marching band, and they were all wearing cowboy hats. They were seated close to the Trojans Marching Band in the peristyle end.

Celebrity watch: Actor and Texas supporter Matthew McConaughey, a UT alum, was on the Longhorns’ sideline and was very vocal for his Longhorns during the overtime yelling, “Who wants it more!”

Declining points: Against Texas, the Trojans scored 27 points. Prior to the Texas game, the Trojans were averaging 45.1 points per game.

Declining points – Part 2: Against Texas, the Trojans allowed 24 points. Prior to the Texas game, the Trojans defense was allowing 27.5 points per game.

Limited rush hour: Against Texas, the Trojans rushed for 71 yards. Prior to the Texas game, the Trojans were averaging 269.5 rushing yards per game.

Not in a rush: Against Texas, the Trojans allowed 68 net rushing yards. Prior to the Texas game, the Trojans defense was allowing 216.5 net yards rushing per game.

Reduced flagging: Against Texas, the Trojans had eight penalties for 49 yards. Prior to the Texas game, the Trojans were averaging 92.0 penalized yards per game.

The last word: So now you have less than a full week to get ready for undefeated Cal (3-0) and the Bay Area Weekender. Hey, the fun is just beginning!