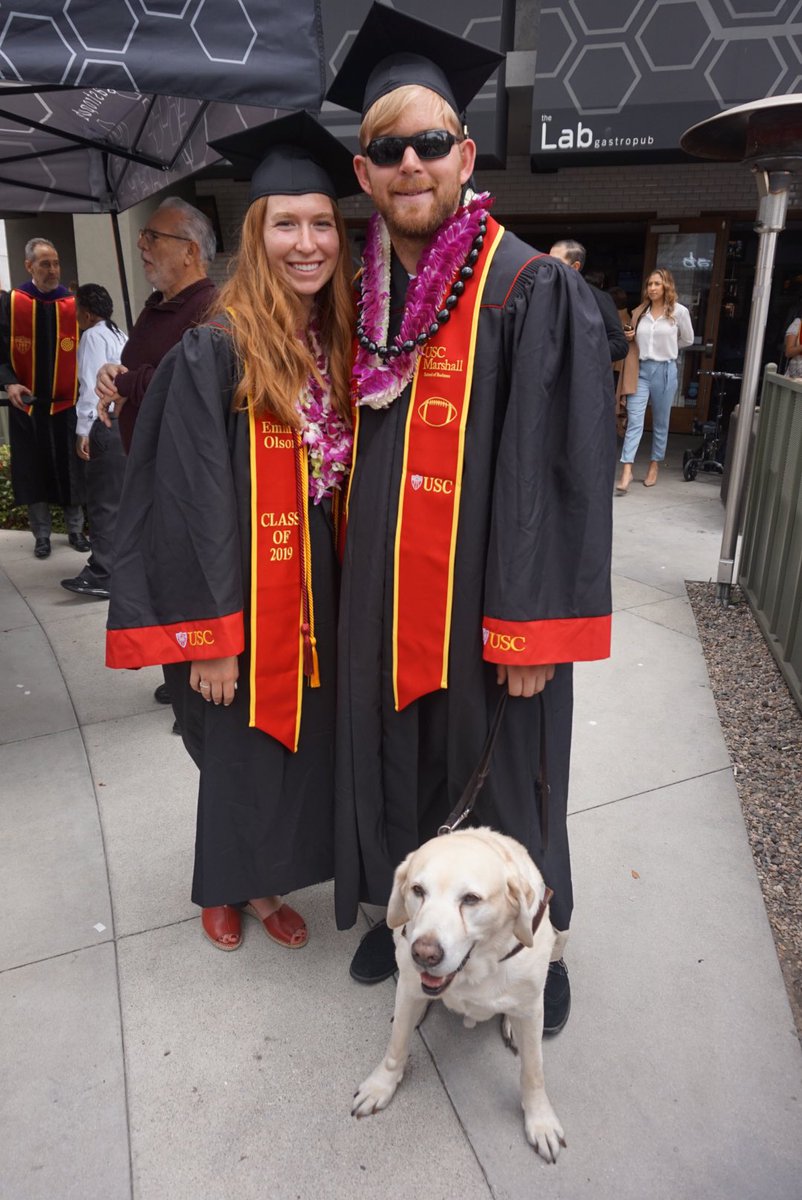 The graduate: In the storied history of USC football, no player defined the tradition of “Fight On” than blind snapper Jake Olson (photo above). Celebrated by so many Trojans, Jake not only fulfilled his dream of playing football for his beloved Trojans and actually playing in games, he accomplished the ultimate goal this past week, graduating from USC with a degree in business administration. Through his collegiate accomplishments in cardinal and gold, the legend of Jake Olson will live on forever and will forever be part of Trojan lore.

The Bartner doctorate: As a college student, he played in the University of Michigan band, but as an adult, he became famous for almost 50 years as the legendary USC band director, so it was a celebration when Dr. Arthur C. Bartner was honored this past week with an honorary doctorate in music from USC for his stellar work with the Trojans Marching Band and for his music department accomplishments. Dr. Bartner still claims to this day that he was mentored into USC football, tradition, and all his future success by the late legendary USC defensive line coach Marv Goux.

Super Bowl of education: In Thursday’s USC student-athlete graduation ceremony, former star defensive back Nickell Roby-Coleman was part of the class of 2019, receiving a degree in policy, planning and development (real estate). Nickell, who helped lead the Rams to last season’s Super Bowl, promised his late mother he would get his degree, and it was a promise kept.

A graduation participant: Trojans’ sophomore quarterback Jack Sears participated in this past Thursday’s USC graduation ceremonies, and we know what you’re thinking – transfer portal potential. No need to push the portal transfer button quite yet, but it does show you the effect and potential chaos that the poorly conceived NCAA rule has created. It’s leading towards a “if I am not starting, I am outta here” mentality. As for Sears, he’s not going anywhere this season, so you can all relax…right? For the record, some players completed their degree the previous semester and some will in the next one. Players had the option of when to “walk” and some elected this spring.

Administrative support: Also, on hand for the student-athlete participation graduate ceremonies were Trojans head football coach Clay Helton and athletic director Lynn Swann. And, no, Swannie didn’t charge for taking his photo next to a graduate.

The Illinois Trojans: Most of us grew up knowing the University Illinois as the Fighting Illini. Now if former Trojan quarterback Matt Fink, who graduated USC this past week, joins former USC teammates Travon Sidney, and Oluwole Betiku at Illinois, Illini head coach Lovie Smith just might want to consider his school change nicknames from the Fighting Illini to the Fighting On Illini.

The Finkster: According to his twitter, Matt Fink says going to Illinois is definitely not a done deal. Fink tweeted,“To clarify, I am NOT committed to any schools at the moment. I am in the process of deciding and still looking for other opportunities.”

The Finkster – Part 2: Matt Fink was told by Illinois head coach Lovie Smith that the coach needs a quarterback that shows leadership, and Fink would be given every opportunity to win the starting job. Obviously after spring ball, there is no quarterback at Illinois that Smith feels comfortable to direct his team. Translation: For the moment, it appears that it’s Fink’s job to lose if he comes, but there is speculation that Illinois is still searching for quarterbacks and perhaps Fink has come to the conclusion that there are no real guarantees if he elects to play for Illinois.

Turnaround is fair play: In case you weren’t aware, the 2018 Trojans had two players with roots in the state of Illinois or have you already forgotten graduated tight end Austin Applegate (Seneca, Ill.) and current sophomore tailback Ben Easington (Evanston, Ill.)

Vastly underrated: One of the most underrated quarterbacks in the history of USC football was Mike Rae, who was the quarterback on the 1972 national champions. Rae was also underrated by the Oakland Raiders that signed him. Mike, a local Lakewood High grad, was the perfect quarterback for the 1972 Trojans and was especially effective in big games.

Simply hysterical: If you haven’t heard the latest podcast addition to WeAreSC, “ConQuiz”, you are missing one of the funniest and witty 40 minutes you’ll ever hear. With the relentless, sarcastic, and autocratic host Chris Arledge – judge, jury, and executioner – he is the Judge Judy of game shows. With questions regarding USC football history, folklore, stories, and recollections, Arledge shows no mercy in awarding and taking away points between two celebrity contests at his discretion. In the premier ConQuiz episode, it’s former All-Pac linebacker, co-captain of the 1974 national champions, and WeAreSC staff writer Kevin Bruce against former USC all-star D-back, legendary Long Beach Poly athlete, and fellow WeAreSC staffer Darrell Rideaux. Word of warning, you’d better be wearing Depends to finish the podcast. Click and enjoy: https://wearesc.com/wearesc-podcast-conquiz-episode-1/

Ranking’em: ESPN.com has listed its college preseason top 25 games to circle, and No. 18 Utah’s game against the unranked Trojans is a circle game. According to ESPN,“The Utes will begin their defense of the Pac-12 South title in Los Angeles, where a win against USC would have the potential to make a meaningful early-season statement. At this point, Utah should expect to win this game. The Utes have been more physical and more disciplined than USC, and there’s nothing to indicate it will be much different by the end of September.”

Just a coincidence: Was it just a coincidence that the day after Bellflower (Calif.) St. John Bosco quarterback DJ Uiagalelei announced for Clemson, the official USC athletic website ran artwork retweeting Trojans’ verbal quarterback Bryce Young dressed in a home USC full uniform standing in front of the Coliseum with a freeway sign on the upper left reading “Pasadena”? Hmmm, Pasadena. Maybe there was a subliminal message regarding the Rose Bowl somewhere?

The transfer: Word has gotten out that former Bellflower (Calif.) St. John Bosco corner Chris Steele is leaving the University of Florida due to an alleged off-field incident that included a female and another student-athlete. Steele, once a USC verbal, is again looking, but his future destination could be the University of Oregon, which was considered his second choice behind the Gators at the time. It would be a major surprise if he ended up at Troy.

Spring numbers: If you’re looking for a glimpse into fan enthusiasm, interest, and probably season ticket sales for 2019, look no further than some of the attendance figures for the recent Pac-12’s spring games. Leading the spring game charge was Oregon, which had an announced 35,000 attend its game in Autzen Stadium. Behind the Ducks was Colorado with 7,755. Down near the bottom of the conference spring game attendance count was the Trojans’ “Showcase” game, which drew an estimated 2,000 at the track stadium. Cal announced 1,500 for its spring game and according to those in attendance, UCLA may have been smaller than Cal. You can draw your own conclusions.

Just wondering: Where would the Trojans be today if former Trojans’ athletic director Pat Haden had hired Ed Orgeron instead of Clay Helton?

The last word: We would be remiss not to wish all the moms out there a very special Mother’s Day. If your mom is still living, give her a great big hug and a kiss, and if she has passed on, still give her a symbolic big hug and a kiss. Folks, you have only one mother, so use the day to make it a real celebration either in real time or in memory.