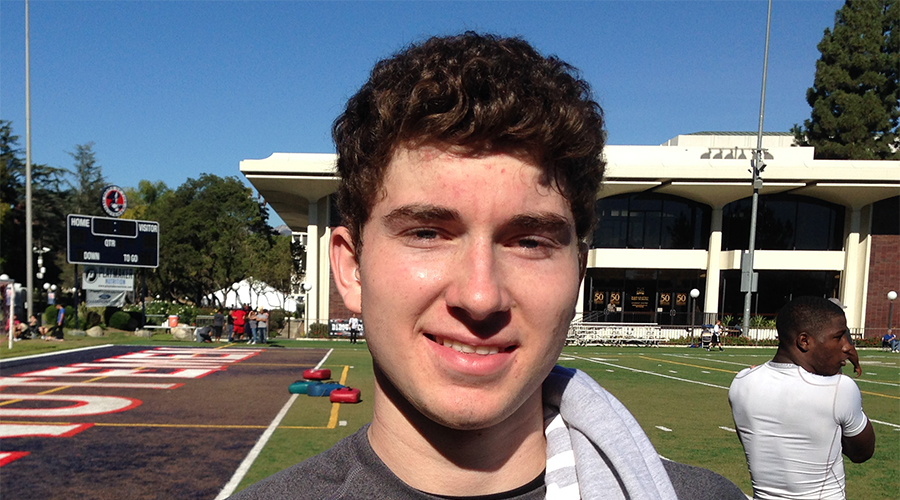 Weather report: According to WeAreSC recruiting expert Johnny Curren, super junior quarterback Shea Patterson (photo above) from Shreveport (La.) Calvary Baptist loves the California weather, and that could give the Trojans a big edge in his recruiting.

The camp: Shea Patterson was a recent attendee at the Steve Clarkson Dreammaker QB camp and put on quite a passing show. According to Johnny Curren, Patterson was a regular looking prospect until he started winging it around the yard. That’s when eyeballs widened and evaluations came back extremely high.

JDB: If Shea Patterson elected to go with the Trojans in 2016, he would be the second quarterback from Louisiana to don the cardinal and gold, or have you already forgotten John David Booty, who also hailed from Shreveport (La.) and attended Evangel Christian Academy.

JDB – Part 2: John David Booty: In case you’ve forgotten, JDB was All-Pac-12 in 2006 after replacing the departed Matt Leinart and led the Trojans to an impressive 32-18 victory over Michigan in the 2007 Rose Bowl. Booty was named the Rose Bowl MVP in the 2008 Rose Bowl, as the Trojans defeated Illinois 49-17 and John David threw for 255 yards and three touchdowns.

Tough business: As we all know, recruiting can be a tough business for both the coaches doing the recruiting and the players being recruited. This week it was made public through social media that “former” Trojans two-way recruit Taeon Mason (Pasadena, Calif./Muir) had decommitted and appears headed for Washington State. The same also applied this week to former Trojans wide receiver verbal Tristan Payton (Jacksonville, Fla./First Coast), who has committed to Central Florida.

FYI: In case you weren’t aware, Tristan Payton was named the MVP of the Semper Fidelis All-American Bowl (101 yards and two touchdowns), a national game for standout high school players.

FYI gray shirt: In simple terms, a “gray shirt” is when a player delays his enrollment at his future college so that his eligibility clock will not start ticking until he arrives on campus during the second semester of the year.

FYI blue shirt: The “blue shirt” approach is basically the same as a “gray shirt” with one very significant difference.    Whereas a gray shirt athlete is delaying their enrollment at the university until the spring semester, a “blue shirt” will enroll in the fall and attend as a walk-on athlete without a scholarship for at least the first semester.

A family affair: Recent Trojans linebacker verbal Osa Masina (Salt Lake City, Utah/Brighton) and his family have become good friends with the family of another prime Trojans Utah recruit, LB Porter Gustin. Take this as a very good sign. From all reports, it’s not a matter of if but when Gustin commits to the Trojans. And the hits just keep on coming.

Line in the sand: Come to think of it, the Trojans staff now has three former USC assistants working in the South to battle for players – Miami’s Brennan Carroll and Jethro Franklin and LSU defensive line coach Ed Orgeron,

Pondering: Did you ever stop to think that if the Trojans did put the names of players on the back of their jerseys it might cut down on the number game programs sold at the Coliseum, which can affect advertising program rates? After all, if you can see the name of a player on the back of his jersey, there would be little need buy a program to use the numerical rosters.

The threat: If you don’t think that a Southern California recruit, a USC recruit in particular that visits Ohio State or LSU isn’t going to be charmed by either an Urban Meyer or an Ed Orgeron, you’re doing some wishful thinking.

The threat – Part 2: Of course if the Trojans win big in the future, the Meyer/Orgeron factor will be reduced considerably.

The alignment: As the Trojans ease into a 3-4 defense, it means that there is a bigger need for linebackers and lesser need for down linemen. Of course it’s all about quality and depth no matter the configuration.

Size counts: Just the pure physical size of the Trojans linebacker commits compared to recent linebacker recruits brings back memories of some the bigger Trojans linebackers of the recent past like Rey Maualuga (6-2, 260) and Brian Cushing (6-3, 255), and Clay Matthews (6-3, 240).

Exception to the rule: Of course not all the linebackers have to be physical behemoths like a Rey Maualuga. There is always room for a smaller linebacker like former Trojans All-American Matt Grootegoed (5-11, 215).

Booty call: Newport Coast (Calif.) Sage Hill High has hired Adam Booty, brother of former Trojans QB John David Booty, as its new high school football coach. The private school gets a Booty who is not a former quarterback but a receiver. Adam Booty, a standout at Evangel Christian Academy in Shreveport, La., where he set national records for receptions (302), receiving yards (5,867) and touchdowns (83).

Booty Cal – No. 2: According to Adam Booty, all his famous brothers and father are going to be party of the new Sage Hill football program, which finished 2014 at 3-7 overall and 0-4 in league play.

The helmet: Departing Trojans linebacker Hayes Pullard gave a good account of himself in Saturday’s Senior Bowl, which was played in Mobile, Alabama. Perhaps it was also the fact that Hayes wore this past season’s “new” metallic Trojans helmet. Ah, yes, the power of the helmet.

The final word: Come to think of it, if the Trojans could find another linebacker named Loggins to go along with Osa Masina, they could have their own Loggins and Masina, and, yes, I know the musician’s last name is spelled Messina.