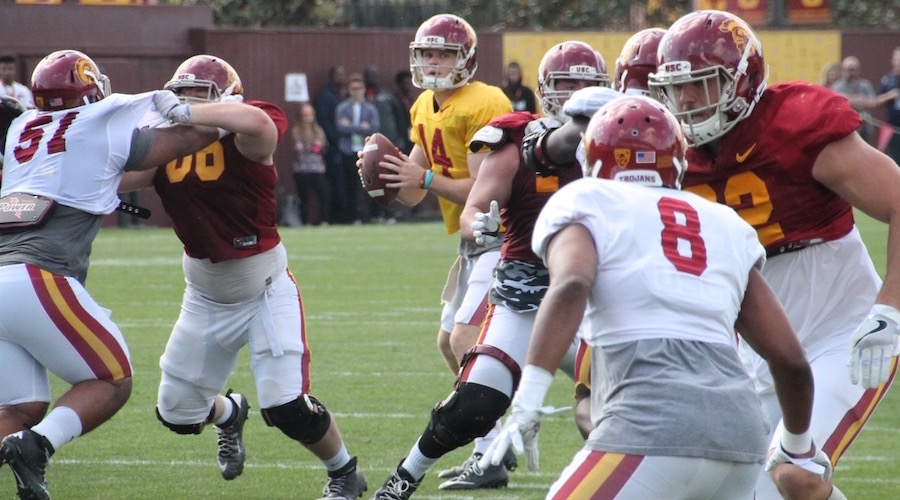 So it begins: The Trojans begin on-field Cotton Bowl preparations for Ohio State on Monday and continue through Friday. During the regular season, the Trojans practiced at 4 p.m., but that time as been changed to 3:15 p.m. for this week’s opening bowl practices.  The media will be allowed to interview offensive players on Tuesday and defensive players on Wednesday. There will be no practices next weekend (Dec. 16/17). As per the regular season, practices are not open to the general public.

Holiday time: Before breaking for the Christmas weekend, the Trojans will practice just twice, Monday, Dec. 18, and Tuesday, Dec. 19. Those practices on campus will have staggered times with Monday’s practice at 3:15 p.m. and Tuesday’s practice at 9:50 a.m., so players can depart for the holidays and be with their families. It should be noted that the Cotton Bowl kicks off at 7:30 Central Time, which means 5:30 p.m. Pacific Time, so a 3:15 practice isn’t that far off body time from the actual Central Time kickoff.

Early arrival: The Trojans are slated to land in Dallas on Saturday, Dec. 23, and will stay at the Gaylord Texan, the same swank “Dallas Cowboys” hotel they stayed at last season when they were preparing to play Alabama in AT&T Stadium. Although the Gaylord Texan is pricy, it’s an outstanding hotel located in Grapevine, Texas, and those of us that stayed there when the Trojans were preparing for the Crimson Tide would give it a resounding thumbs up.

Practice time: In Dallas, the Trojans will practice a few times at a local high school, but the media, according to CFP prodigal, will only be allowed to watch the first 15 minutes.

Practice time – Part 2: The week of the game, which includes Christmas Day, both teams will practice separately in AT&T Stadium, and it will also be closed to the media.

The media scrum: The media will be housed at the Omni Downtown Dallas, which is about half-mile walk to Dealey Plaza, site of the assassination of President John F. Kennedy. A number of morning press conferences will be held at the Omni featuring players and coaches from both teams.

Weather warning: I remember one Cotton Bowl when it actually snowed. Of course, Notre Dame was one of the teams and probably brought some wintery South Bend weather with them. Leading up to and after Christmas, the weather in Dallas can be “anything goes.” In fact, in some parts of southern and central Texas, it snowed this past week. As for Dallas, today’s Sunday high in “Big D” is 70 degrees with a low of 41.

Cotton challenge: Although there are a number of intriguing Cotton Bowl match-ups, one of the more important ones will be Trojans’ second-team All-Pac-12 offensive left tackle Toa Lobendahn contesting with Ohio State’s Ohio State sophomore defensive end Nick Bosa, who is the Big Ten’s Defensive Lineman of the Year and younger brother of Joey Bosa, a former all-star Buckeye and current member of the L.A. Chargers.

Cotton challenge – Part 2: For the record, Toa Lobendahn is listed at 6-foot-3 and 290 pounds while Nick Bosa tips the scale at 6-foot-4 and 270 pounds, which translated this season into seven sacks and 21 tackles for losses, which led the OSU defense in both categories.

Travel rush: Don’t know if you’re still looking for flights to Dallas, but they’ll cost you a pretty penny at this point, and if you like to pick your own seats through the computer, expect to see slim pickings…like in the middle seat of three across.

The old days: Prior to playing the Cotton Bowl in AT&T Stadium, home of the Dallas Cowboys and Jerry Jones, the game was actually played in downtown Dallas in a stadium remains the original Cotton Bowl, which is located on the grounds of the Texas State Fair.

The honorees: It was a huge past week for Trojans past and present as former Trojans’ Heisman Award winning quarterback Matt Leinart was at a celebration in New York in recognition of being selected to be in the College Football Hall of Fame. While Leinart was being honored in the Big Apple, a number of Trojans were being selected to the All-Pac-12 first and second teams, a byproduct of being Pac-12 champions.

Lefty speaks: As part of his acceptance at the gala in New York, ESPN emcee Holly Rowe asked Matt Leinart about his childhood and his rise to fame. Leinart said, “God, it was a pretty crazy journey. I was born cross-eyed. I was a heavy, very heavy, as a kid. So, you can imagine bullying was a real issue. I was bullied when I was little.And, fortunately, my mom always believed in me, said, ‘One day you’re going to be like the ugly duckling to the swan.’ She always said that, my mom.

More Leinart: “It’s just incredible to be here (New York). And for USC and my time there, the teammates, the coaches that really helped me, I would not be up here today if it weren’t for them clearly. Just honored to be here.”

Now the dad: As part of his speech to the other inductees and the audience at the New York Hilton, Matt Leinart thanked his dad and gave insight to raising his own son, Cole. Leinart said, “My dad was so great because in sports, it was always a part of our life, but he didn’t push it on us. He just wanted us to play, be part of a team, learn, have fun, all those things. And that’s kind of what–I love coaching my son; but that’s kind of what I’m just trying to teach him: Work hard, be a great teammate and just really enjoy all the things that are coming to him as far as football, basketball, baseball. And just humility. And he’s 11, so he gets it.

Tail of a back: A tailback that may go down as one of the most underrated in USC history, junior Ronald Jones ll was named first team All-Pac-12, a tribute to not only his skills but the mentoring of running back coach Deland McCullough. Jones went from being a very skilled and fast to being a much more aggressive and physical under McCullough’s tutorage.

Steady improvement: Although he always had the tools, the 2017 season, under defensive line coach Kenechi Udeze, turned junior DL Rasheem Green into a force in the interior. Although he battled constantly through injury and pain, Green was rewarded with first-team All-Pac-12 honors.

Mr. Edge: You can argue effectively that senior outside linebacker Uchenna Nwosu was the 2017 Trojans’ Defensive player of the Year. He will forever be remembered – when not batting balls down – by his electrifying burst off the edge to stop Stanford running back Cameron Scarlett on fourth down at the Trojans’ 1 late in the fourth quarter of the Pac-12 Championship Game with Stanford. Nwosu has been recognized as first-team All-Pac-12.

The middle man: If there were a brain to the body of the 2017 defense, there’s no question it was junior inside linebacker Cameron Smith. Smith was a traditional tough, aggressive USC inside linebacker who brought it every game. It didn’t go unnoticed by Pac-12 opponents, as Cam was presented with first-team All-Pac-12 honors.

Tale of the Tell: Although the Trojans’ secondary was much maligned – and at times deservedly so – there was a shining light in junior safety Marvell Tell lll. Always around the ball and able to deliver a crushing hit, Tell was recognized as first-team All-Pac-12.

Underrated: When you think of junior receiver Deontay Burnett, you think of big catches and dramatic touchdowns. Being double-teamed for much of the season while the younger receivers went through their painful baptism, Burnett stayed the course and was given second-team All-Pac-12 honors. In truth, he was worthy of first-team consideration. Deontay, however, was awarded AP first-team All-Pac-12.

Lining up: Perhaps a surprise to some, redshirt junior Toa Lobendahn, who missed much of last season with another knee injury, was asked to play left tackle and had to work hard to improve throughout the season. A probable center next season, he did what was asked and remains a team player with a positive attitude. In the end, he was accorded second-team All-Pac-12.

Up and coming: When outside linebacker Porter Gustin went down for most of the regular season, there was grave concern for that area of the Trojans’ defense. As it turned out, the “next man up” theory allowed redshirt sophomore Christian Rector to showcase his game and did he ever! He was a blessing for Clancy Pendergast’s defense and for his efforts a recipient of second-team All-Pac-12 recognition. The best is yet to come.

All-Purpose and special: Although his work as a wide receiver became more dominating as the season wore on, sophomore Michael Pittman Jr. also excelled as an all-purpose performer with emphasis on special teams. Pac-12 foes saw his mark and recognized him with first-team All-Pac-12 All-Purpose honors. Pittman also saw teammate Matt Lopes, a redshirt senior, right behind him on the second team All-Pac-12 All-Purpose team, a tribute to both players.

IMHO: Look, congrats to the Trojans All-Pac-12 selections listed above, but it seems like a shame that Trojans senior co-captain and safety Chris Hawkins didn’t make first or second-team All-Pac-12. Sure, not everybody can make it, but Hawkins deserved it. He was that type of player that was an unsung hero on a championship team. It wouldn’t shock me when his playing days are over that he eventually becomes a wonderful college secondary coach. He is a football gym rat. As a nice holiday gift, Chris did make second-team AP All-Pac-12.