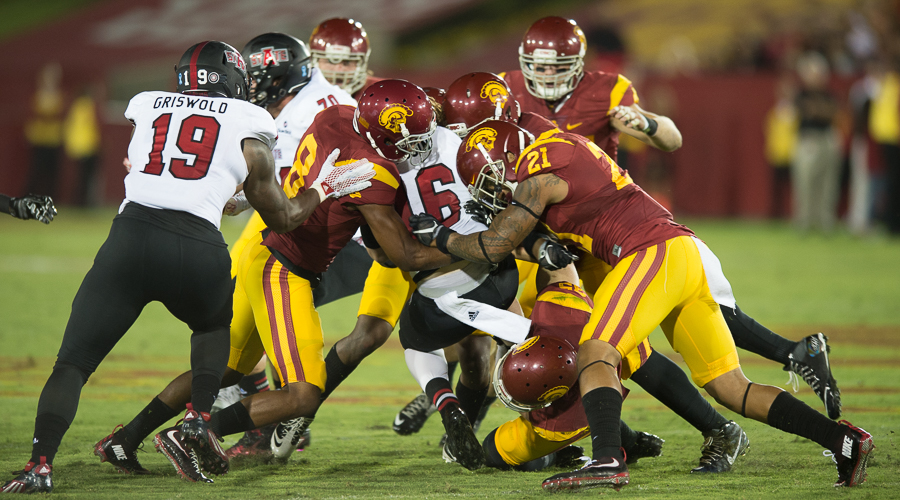 The evaluation: To the point, the Trojans did what they needed to do against Arkansas State on Saturday night, and that was to win impressively. So does a 55-6 shelling of the Red Wolves qualify as “impressively”? Well, the Trojans did beat the 29-point opening line point spread by 26 points and looked workmanlike in doing it.

The evaluation – Part 2: Offensively, the Trojans obviously scored a ton of points, but are they a running team or a passing team? It all depends on the plays called and the sequence of a particular series. Although the final total number of plays between passing and running were even at 32 apiece, Trojans fans may have to wait until after the Stanford game or possibly even the Arizona State game to see what is the offensive strength and true identity of this team.

However, there has to be concern over the fact that Cody Kessler (19 of 26 for 236 yards and four touchdown passes) was sacked five times in the first half, but the Heisman Trophy candidate was not sacked at all in the third quarter, his final quarter of play. The offensive line is still a work in progress.

The evaluation – Part 4: Defensively, although the Trojans gave up six points and 401 yards in total defense, yet at times the Trojans looked a lot like previous Trojans defenses in terms of defending a running quarterback. There were plenty of positives like freshmen linebacker Osa Masina (46-yard TD fumble recovery return) and corner Iman Marshall, both of whom had had their moments. Sophomore defensive tackle Kenny Bigelow Jr. finally made it to the field and really brought it.

And let’s not forget the play of sophomore safety/corner Chris Hawkins who had an interception and a fumble recovery and starting freshman linebacker Cameron Smith, who along with sophomore safety Matt Lopes, had a team-high seven tackles.

Sark says: After the game, Trojans head coach Steve Sarkisian said, “I thought we played well against a dangerous opponent. This was a good football team, and they will win a lot of games and probably go to a bowl again. We played 13 true freshmen tonight and had 23 players make Trojan debuts.”

The Arkansas State perspective: After the game, Arkansas State head coach Blake Anderson said, “We tried to use quickness and move some guys to try and make him (Cody Kessler) uncomfortable and we did at times, but not consistently. Their receivers are way too fast and explosive to give him a lot of time. I thought he made a couple of great plays under duress, huge throws either under pressure or going down that were backbreakers for us, one particular at the sideline. There’s a reason he’s touted as one of the best in the country and we saw that tonight.”

The game changer: In the Trojans opening victory of the season, the turning point in the game didn’t take long as on the Trojans fourth play of its first possession, quarterback Cody Kessler hit a crossing JuJu Smith-Schuster in stride for a 61-yard touchdown reception and the rout was on.

Justin in time: Although the Trojans defense allowed just six points to Arkansas State, it’s too early to tell if having defensive coordinator Justin Wilcox in the press box was effective. We probably won’t know next Saturday night either against a clearly outmatched Idaho team in the Coliseum. The first real test will come in the third game of the season in the Pac-12 opener against Stanford (0-1), a disappointing 16-6 loser at Northwestern on Saturday morning.

No action Jackson: Trojans standout Adoree’ Jackson left the game in the first quarter after fielding a punt and didn’t return. Jackson suffered a reported strained abdominal injury, and that brings up the question again of whether Adoree’ is wearing too many hats on defense, offense, and special teams. After the game, Sarkisian said he believes the injury isn’t serious.

Fullback block: On tailback Tre Madden’s 65-yard second quarter touchdown run, the key block was provided by a lead fullback block by senior fullback Jahleel Pinner. It was ammunition for Trojans purists that want to see more of a role for the fullbacks. And by the way, you had to like how Madden ran at tailback (109 yards), as well as true freshman Ronald Jones (86 yards), especially the kid’s exhilarating 44-yard TD run in the third quarter.

Maxing out: Second unit quarterback Max Browne entered the game beginning the fourth quarter and was 3 of 5 for 66 yards. He figures to see more time next week against hapless Idaho.

Reception committee: The highly touted Trojans receiving corps lived up to its reputation of explosiveness with a combined 320 yards on 23 receptions, good for four touchdowns.

Weather report: SoCal has experienced hot weather the past couple of weeks, but Saturday night’s kickoff was a comfortable 72 degrees.

Tunnel runner: Continuing a well-received tradition of having a former player lead the Trojans out of the famed Coliseum tunnel before kickoff, the honor on Saturday night went to former Trojans All-America linebacker Keith Rivers.

Scholarship production – Part 2: On Saturday night, kicker Alex Wood converted 7 of 8 extra points, attempted no field goals, and had two touchbacks on kickoffs. Wide receiver Christian Tober had one reception for six yards and one punt return. Receiver George Katrib had no receptions but did play.

Cover boy: There were no specific Trojans on the front of Saturday night’s official game program. The cover featured a collage of three members of The Song Girls, Traveler, the Men of Troy taking the field, and six metallic red helmets. The 232-page program sold for $7.

Pregame adjustment: The pregame entertainment in the Coliseum was adjusted, as last season’s live-from-the-field show hosts were replaced by some of “today’s” DJ music, which was too loud and too annoying. It certainly made it anything but a college football game atmosphere. Thumbs down to that. How about this….no music and no pregame hosts and just wait for the Trojans Marching Band to take the field.

High Sealing: Prior to kickoff, a unit of Navy Seals parachuted onto the Coliseum turf with one parachute Seal descending with a USC flag and another carrying the American flag with fireworks ablaze.

Uniformed look: For those wondering if the Trojans would come out with any changes to their home uniform look, the skill position players wore custom Nike Vapor Untouchable cleats. The rest of the team wore various forms of dark cleats. Whatever happened to the whole team wearing a team uniform?

Giveaway: The 2015 USC football schedule poster was given out to fans exiting the Coliseum.

A grassy issue: The Coliseum grass for Saturday night’s game was the best we’ve seen it in quite a while. We were on the field for the final five minutes, and it was like standing on a well-manicured putting green.

Gone but not forgotten: Former Trojans quarterback Max Wittek threw for three touchdown passes and 202 yards in leading Hawaii (1-0) to a 28-20 victory over the Pac-12 Colorado Buffaloes (0-1) in Honolulu on Friday night. Congrats to Max and to Hawaii head coach Norm Chow, the former Trojans offensive coordinator.

Wake-up call: It would be easy to say that Stanford looked disjoined and physically out-played on defense in its 16-6 upset loss on Saturday at unranked Northwestern, but it didn’t help the Cardinal cause when kickoff was 11 a.m. Central Standard Time, which translates to 9 a.m. body time for the Stanford players. It was reported that the wake-up call for the Cardinal players for Saturday morning’s game in Evanston, Illinois, was 4:40 a.m.

Oops: ESPN GameDay commenter and Heisman Trophy winner Desmond Howard said before the Stanford/Northwestern game that Stanford would win the Pac-12. Of course, Stanford hasn’t yet lost a Pac-12 game, so they still can… but they’ll dramatically improve to fulfill Howard’s courageous prediction.

Welcome back: Even though he received a warm welcome back from the Boise State fans, former Broncos head coach Chris Petersen, now in his second season at Washington, left the “Blue Turf” on Friday night with his Washington Huskies losing 16-13 on a missed 46-yard field goal attempt with just five seconds to play. The Trojans play Washington in the Coliseum on a Thursday night on Oct. 8.

Taken to the Matt: Not exactly a shock or surprise that the Philadelphia Eagles traded Matt Barkley to the Arizona Cardinals for a seventh-round draft pick. When the Eagles signed quarterback Tim Tebow, the writing was on the wall for Barkley. However, the irony is that Tebow was a late cut by the Eagles on Saturday.

Taken to the Matt – Part 2: The trade of Matt Barkley to the Arizona Cardinals will reunite Matt with former Trojans Heisman Trophy winning quarterback Carson Palmer. I see it this as a plus for Barkley in learning from Carson, and this should allow Barkley’s development in a more conventional NFL passing offense.

A comfortable Matt: Give former Trojans quarterback and Heisman Trophy winner Matt Leinart high marks for his work on the FOX College Football Preview Show. Lefty has come a long way from being in the collegiate and professional fishbowl, and he appears to have recaptured the personality spark he had back at Mater Dei High. Matt looks to have finally put his football career in the rearview mirror and is now at peace with his new broadcast direction.

Say it ain’t so: Speaking of late NFL cuts, the Cleveland Browns have cut former Trojans linebacker Hayes Pullard. It says here that if pro football doesn’t work, Hayes would make a wonderful coach at either the high school or college level.

The last word: The Trojans will host the Idaho Vandals (0-1) next Saturday night (5 p.m. PDT) in the Coliseum in their last “tune-up” before welcoming the Stanford Cardinal in the Pac-12 opener for both teams on Sept. 19. For the record, on Thursday night Idaho lost at home to Ohio, 45-28 – not No. 1 Ohio State – and no further comment is necessary.