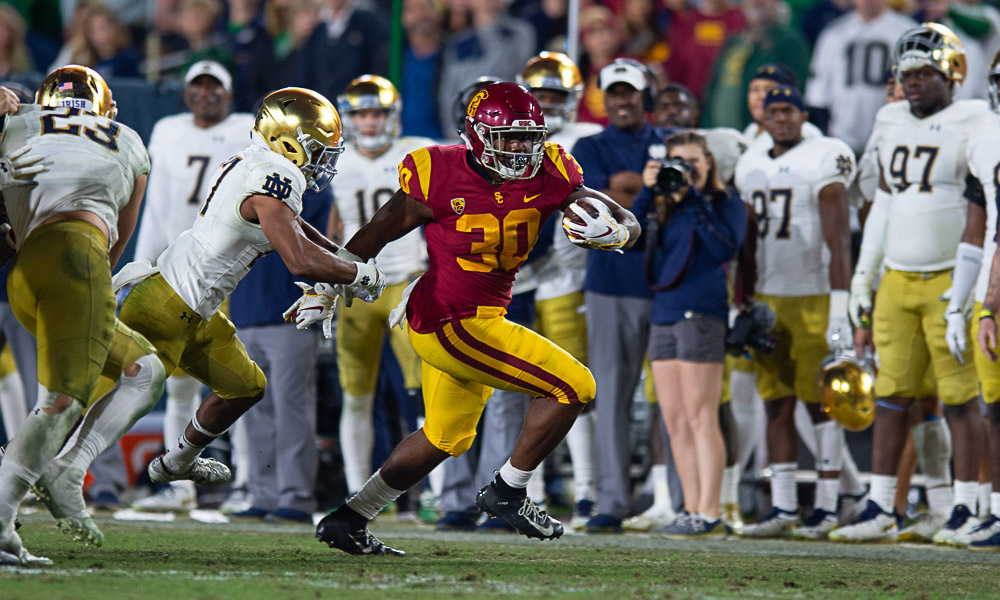 Still watchable: According to new data regarding TV viewers of college football, last season’s USC/Notre Dame in the Coliseum was the ninth most watched regular season college football game with 7,736,000 tuning in. Sure, the undefeated Irish (12-0) were looking to enter the CFP, but it was still USC/Notre Dame. And the Trojans, who were 5-6 at the time and reeling, didn’t exactly embarrass themselves falling 24-17 after holding a 10-7 halftime lead. If there was an embarrassing number, it the fact that only 59,821 showed up at the Grand Old Lady to watch the game.

Still watchable – Part 2: So, it will be interesting to see what the numbers are this season when the Trojans travel to South Bend to play the Irish on Oct. 12. FYI, the week before the longtime two rivals meet, the Trojans will have a bye after playing at Washington (Sept. 28) while the Irish will be hosting Bowling Green (Oct.5). Isn’t playing Bowling Green like having a bye?

Still watchable – Part 3: Because of the potential for such a large national viewership, now you know why this season’s USC game against Notre Dame in South Bend will kick off at 7:30 p.m. in the Midwest. NBC, which carries Notre Dame home games, understands viewer numbers and so do their advertisers.

Still watchable – Part 4: ABC’s Saturday Night Football last Nov. 24 featuring Notre Dame at USC was the most-watched Fighting Irish game on any network since 2016. Thank goodness for the Irish that they have the Trojans on their schedule, or their television ratings could be called into question (wink, wink).

First the ceremony and now the reception: By now, the Trojan fans are understandably cerebrating last Tuesday’s official announcements that both 5-star freshmen WR Bru McCoy and CB Chris Steele are in the cardinal and gold fold. So, the logical question is will one or both or neither be eligible to play in 2019?

The waiting game: We now move on to another NCAA drama, and that’s what will the NCAA do with Bru McCoy and Chris Steele as it pertains to their eligibility? Obviously, the hope of hopes is that both are able to play in 2019. However, IMHO it appears that Steele has the stronger case when applying to the NCAA eligibility committee. It’s a committee, right? Oh no, not another USC ruling in front of an NCAA committee.

The “what if” game: What if both McCoy and Steele are eligible? Well, it means that McCoy will compete for some serious wide receiver playing time and probably be firmly in the mix. As for Steele, he has a real chance to challenge for a starting spot at some point once he learns the defense. Right now, the Trojan corners figure to be sophomore Olaijah Griffin and redshirt freshman Isaac Taylor-Stuart. On the other hand, if both McCoy and Steele aren’t eligible, the Trojans are going to have an impressive scout team.

It’s a snap: Just got sent a copy of Phil Steele’s College Football Preview.Of the four Trojans named to Steele’s preseason All-Pac-12 first team, two made it by way of special teams. Junior WR Tyler Vaughns made the team as a punt returner, but did you know that junior long snapper Damon Johnson also was named? For your edification, Damon played his prep ball Glendora High and continued at Citrus College but did not play football at the JC. A sociology major, Johnson returns for his third season with the Trojans. Last season, he appeared in all 12 games and even made a tackle against Arizona. The other team Trojans named to Steele’s first team were WR Michael Pittman Jr., who was also on the cover, and DT Jay Tufele.

Still the Granddaddy: The Rose Bowl Game presented by Northwestern Mutual, which has led all bowls in attendance every year since 1945 (excluding title games), attracted 91,853 spectators, again the most of any bowl game.

BTW: If you’re looking for an overall change in the Pac-12 Bowl structure, the conference will face the ACC three times and at least two from the Big Ten. Is a bowl game against a Mountain West team helpful to the Pac-11 or is that a rhetorical question?

As for the Pac-12: The Pac-12 Networks finished the 2018 football season up +8% in total viewers, making it the most-watched season ever. And the point is?

IMHO: I know I am speaking for the majority, but I am sure glad I don’t have refer to the Coliseum as the United Airlines Memorial Coliseum. And I am also glad that I don’t have write it that way either.

Home sweet home: Former Trojans corner Isaiah Langley has signed a free agent contract with the Oakland Raiders. What makes this notable, is that Isaiah played his prep ball at Hayward (Calif.) Foothill, so it’s a chance to play pro ball in front of family and friends. The only fly in this homecoming and silver and black ointment is that Langley first has to make the team.

Winning brings fans: Certainly, the Trojans know about how attendance and its relationship to winning. You might be interested to know that Cal – not normally a hotbed of college football interest – increased its home attendance by 17.3%, thanks to being competitive. Let’s not forget that the Golden Bears head coach is former Trojans’ defensive guru Justin Wilcox, who wasn’t exactly one of the Trojans’ fan favorite coaches at the time.

Important change: As commissioner of the Big Ten, Jim Delany is one of the most powerful collegiate administrators in the country. Delany, however, is leaving and the Big Ten has selected a new commissioner in Kevin Warren, the COO of the Minnesota Vikings. It should be noted that Warren is the first African-American commissioner of a Power Five Conference and is said to be a disciple of former powerful former SEC commissioner Mike Slive. Coming from the NFL should be a major plus for Warren in understanding the current CFP and the potential of expansion from four to eight teams. Now compare the credentials of Warren and his NFL background to current Pac-12 commissioner Larry Scott, who came to the conference after serving as the CEO for professional tennis. I know, let’s not get started.

The update: The replacement seats are filling in so here’s the latest real time Coliseum renovation camera view: https://app.oxblue.com/open/usc/lacoliseumrenovation

The final word: And a special Father’s Day to all the dads out there present and past. As for me, I am going with Junior to the Dodgers/Cubs game this afternoon at Dodger Stadium, and then after the game, a father-son game of catch in the Dodger Stadium outfield. Our own Field of Dreams.