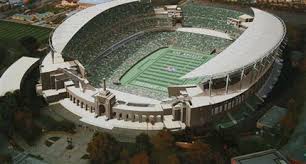 Sun drenched: Many of those loyal but unfortunate season ticket holders that once sat under the shaded portion of the Coliseum – which happened to be under the old Coli press box – have been relocated to the other side of the Grand Old Lady and are now in the direct crosshairs of potentially a merciless sun for day games. Sure, there are night games, but for senior citizens and those susceptible to health issues from sun exposure, this couldn’t be worse. Maybe the proposed renovation photo above with overhangs on both sides of the Coliseum would have made day games more tolerable for those affected by the heat.

Read the label: There are a number of daily medications that warn against prolonged exposure to the sun, and its menacing side effects. Displaced fans better read those labels on their prescriptions before heading out to Exposition Park come next USC football season. Wouldn’t it have been nice if somebody – anybody – had given some thought to maybe – just maybe – putting some new covering on the opposite side of the press box as a way to accommodate and appreciate those displaced senior souls. As you probably saw from some of the previous Coliseum models for renovation, they included some sort of covering on both sides of the stadium. It was said that a covering would ruin the inside look of the Coli. Well, doesn’t that Scholarship Tower ruin the inside look all by itself – unless, of course, you have a massive bank account to enjoy the vantage points and amenities of one of those privileged suites?

Under the roof: During past spring practices and during training camp in August whenever the Trojans went through their drills in the Coliseum, a number of the media would sit in the formerly shaded seats under the press box. There was a health concern for overexposure to the sun, and it was, quite frankly, too darn hot to seat down near the field unless you brought an umbrella. Wimps? No, excessive heat for a prolonged period of time makes most humans fatigued, drained, and downright woozy. Coliseum paramedics bear witness to it each season.

Remembering Purdue: We’ll never forget that one season back in 1998 when the Trojans hosted Purdue in the Coliseum, a game that kicked off at the “early hour” of 11:30 a.m. The morning was already heating up drastically, and we were sitting in Section 17, about 23 rows up from the field. As the game wore on and the second half was upon us, it was so hot that fans were literally leaving from the sun exposure, and some had to have Coliseum medics come to their rescue. We can’t imagine what a hot day will be like for those that once sat in that shady area of the “old” Coliseum.

Kickoff times: Because of all the loyal USC fans that once sat under the shady Coliseum press box and have been displaced to the “sun” side, there figures to be more interest than in recent times – especially for senior citizen fans – regarding the kickoff times for 2019. FYI, kickoff times for early season games are expected to be announced by the end of this month.

Kickoff times – Part 2: It figures that those displaced Trojan fans with a direct hit by the sun will be rooting for kickoff times that start no earlier than 4:30 p.m. Ironically, those 7 p.m. night games may be more unexpectedly appealing in seasons past given the seat relocations.

Umbrella time: Because of the potential heat, there’s always the thought of bringing an umbrella for protection, but current Coliseum rules forbids the use of umbrellas inside the Coli.

On the bright side: No pun intended, as of Sunday, there’s only 97 days till the kickoff of a new college football season.

Money ball: Although maybe it’s nobody’s business, but don’t you find it curious that when the Los Angeles Times asked for and received USC salary information, everybody appeared to be listed with their compensation except current Trojans’ athletic director Lynn Swann?

Strength of schedule: According to cbssports.com, the Trojans have the toughest 2019 schedule in the Pac-12. Tom Fornelli writes, “The Pac-12 generally performs better than most teams in my projections because of the conference’s nine-game conference schedule, as well as having nearly all of its teams playing at least one Power Five nonconference opponent. USC goes a bit further, however, as it doesn’t play FCS schools, which is how it ends up with a noncon that includes Fresno State and road games against BYU and Notre Dame. Further complicating matters for the Trojans this year is that they will not have a bye until Oct. 5, and the season begins with Fresno, Stanford, at BYU, Utah and at Washington. That’s not an easy way to start the season. Then, after the first bye, they hit the road for Notre Dame in the first of seven straight weeks before their second bye on the final weekend of the regular season. I don’t quite understand what the Trojans are doing with their byes.”

TV movement: The Pac-12 title game is moving to ABC this season although the game remains on a Friday night (5 p.m. PT) and continues in Levi’s Stadium. ABC figured the move to the main network would bring in a larger audience than ESPN. Of course, if the Pac-12 had more teams in the national picture that would help with a larger TV audience. The Pac-12 should be equally concerned about the optics of a half full Levi’s Stadium and the message it sends to the rest of the country regarding interest in West Coast college football.

Ranking the QBs: Athlon, whose 2019 National College Football Preview is now available at newsstands and bookstores, has its Pac-12 quarterback rankings. Trojan signal caller JT Daniels, who is on the regional national cover of Athlon, is ranked sixth in conference. Athlon writes, “In order for USC to rebound from a disappointing 5-7 season, more is needed out of an offense that averaged only 26.1 points a game in 2018. Coach Clay Helton took some steps to address this unit by hiring Graham Harrell as the team’s new play-caller after Kliff Kingsbury left for the NFL. Talent certainly isn’t an issue for Harrell. USC has one of the nation’s top receiving corps in place, and Daniels ranked as a five-star recruit coming out of high school. The California native started 11 games as a true freshman last fall, completing 59.5 percent of his throws for 2,672 yards and 14 touchdowns to 10 picks. Daniels also closed out the year on a high note, throwing for a career high 349 yards versus Notre Dame. How far can Harrell help Daniels progress in 2019?”

Ranking the QBs – Part 2: All those above words for JT Daniels, who might not even be the starter when the Trojans open against Fresno State on Aug. 31 in the Coliseum. Of course, most experts like Athlon believe that Daniels will be the USC starter for the first official snap of the season. However, it just illustrates just how much pressure there is on the Trojans’ offensive coaching staff to name a quarterback other than JT. BTW, Athlon’s top 2 quarterbacks in the conference are (1) Justin Herbert (Oregon) and (2) K.J. Costello (Stanford). Both will face the Men of Troy next season.

Another cover boy: Congrats to senior wide receiver Michael Pittman Jr. who along with Stanford QB K.J. Costello are on the cover of the 2019 Street & Smith College Football Preview.

The Steele industry: While disappointing to some USC fans, former Florida true freshman DB Chris Steele (Bellflower (Calif.)/St. John Bosco) made it official when he announced last week he is transferring to Oregon, which was his second choice during the recruiting wars. And don’t blame Steele’s decision on former Trojans DB coach Ronnie Bradford, who is no longer the Trojans’ secondary coach.

What a heel: Denver Broncos offensive lineman and former Trojans’ center Nico Falah tore his Achilles last week at practice. It appears that Nico is already out for next season. Prediction: Falah is an extremely hard worker, and we suspect that we’ll hear from him again sometime in the future.

The crooner: Former Trojans linebacker John Papadakis, father to former Trojans running back and current media personality Petros, is launching a singing career at age 68. Word is that he does have some vocal talent. Wow, how time flies. We can remember when John helped lead the “South” team in the old North-South Shrine Football Game in the Coliseum back in 1969. The prep all-star game featured the best from Northern California versus the best from Southern California. Where did all those years go?

The signing: It was with some interest that former Trojans’ QB-WR Jalen Greene, who transferred to Utah State, has signed a free agent contract with the Los Angeles Rams. We have no idea if wide receiver Jalen is good enough to make the team, but he is getting his shot. And it would say something if Greene actually makes the team as a wide receiver. Imagine Jalen and former USC WR Robert Woods on the field at the same time.

Tailback blue: USC was once known as Tailback U, but in recent times that has all been forgotten by some of the premier prep running backs on the West Coast, especially California. Word is now out that sensational senior-to-be RB Kendall Milton (Clovis, Calif./Buchanan) has listed four schools he wants to visit (LSU, Georgia, Ohio State, Alabama) with a fifth school to be determined. The Trojans are hoping they are part of the mix as the fifth school. FYI, Milton is being recruited by Alabama and former Trojans’ head coach Steve Sarkisian is one of the point men in the recruiting process.

Tailback blue: The most recent superstar high school tailback in the past four recruiting cycle to get away is current Alabama standout running back Najee Harris from Antioch (Calif.) High.

Transfer madness: In news that could affect the Trojans when they host Utah on Friday night, Sept. 20, the Utes again dipped in the NCAA Transfer Portal and brought in OL Noah Meyers from Washington State and former UCLA LB Mique Juarez, once a 5-star Trojans recruit who played little for UCLA. Before laughing Juarez, nobody develops players better in the conference than Utah.