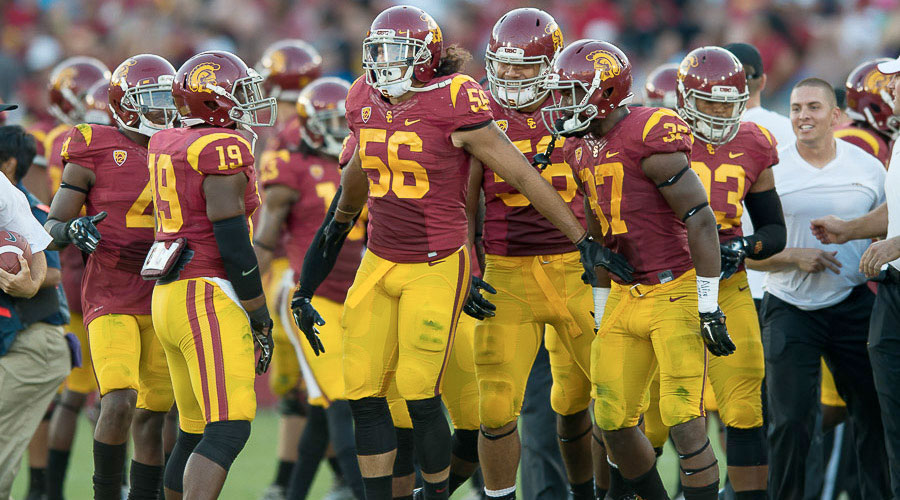 The best option: Given the possibilities and options, the USC Trojans (8-4, 6-3 Pac-12) and their fans should be jumping for joy that the Men of Troy are heading for the locally convenient National University Holiday Bowl in San Diego on Dec. 27 (5 p.m. PST), and their opponent will be the storied Nebraska Cornhuskers (9-3, 5-3 Big Ten).

The last time: The Trojans and the Huskers haven’t met since 2007 when the Cardinal and Gold, under Pete Carroll, traveled to Lincoln and administered a 49-31 domination of the Big Red in a game not nearly as close as the final score.

Holiday Bowl history: Nebraska is 1-2 in the Holiday Bowl, including a 19-7 loss to Steve Sarkisian’s University of Washington team back in 2010. This, of course, will be the Trojans first Holiday Bowl appearance. This will be the fifth overall meeting between the Trojans and the Cornhuskers. Troy leads the series 3-0-1.

The irony: Last bowl season in the Royal Purple Las Vegas Bowl, the Trojans played under former interim head coach and current offensive coordinator Clay Helton. In playing Nebraska, the Trojans will face a Nebraska team that will also be led by an interim head coach, Barney Cotton, who replaced the fired Bo Pelini.

The Irony – Part 3: Ya don’t think that new Nebraska head coach Mike Riley won’t help in giving the Cornhuskers a scouting report on the Trojans, since his Oregon State Beavers played the Trojans back in the Coliseum on Sept. 27 but got smacked 35-10?

The Irony – Part 4: Don’t think for a moment that the Trojans will be underestimating Nebraska just because the Cornhuskers will be led by an interim head coach. All the Trojans have to do is look in the mirror and remember how they reacted when Clay Helton was named one-game interim head coach, or have you already forgotten the Trojans rousing 45-20 victory over Fresno State?

Qualcomm Stadium: The current Holiday Bowl attendance record is 65,416, which was established in 2005 (Oregon vs Oklahoma). Qualcomm Stadium Holiday Bowl capacity is listed as 66,000. With huge followings that like to travel, expect the Trojans and Huskers to easily make it a sellout and probable record-breaker.

Tickets anyone: Cost of Holiday Bowl tickets ranges from $65 to $140.

Cold enough for ya: It figures that the folks from frigid Nebraska will be happy to support their beloved Huskers with some extended time in the expected warmth of San Diego. BTW, the high today in Lincoln was 38 degrees and 69 in San Diego.

FYI: In the final AP poll, the Trojans and Cornhuskers finished No. 24 and No. 25, respectively.

A Trojan for Life: On the Holiday Bowl Board of Directors is former USC head football coach Ted Tollner.

Good news: Newly named Trojans All-Pac-12 center Max Tuerk has announced that he’ll return to Troy for his senior season. Citing that he wanted to get his degree and win a national championship, Tuerk is absolutely making the correct decision.

You don’t say: So what do Trojans All-Pac-12 first-team selections Buck Allen, Nelson Agholor, Max Tuerk, Leonard Williams, and Su’a Cravens all have in common? None of them are seniors.

You don’t wanna say: In reality, only Tuerk and Cravens figure to return for the Trojans in 2015. It’s mildly possible that Agholor could return, but don’t lay down anything valuable in betting No. 15 stays in school.

All Pac-12 shocker: Making neither All-Pac-12 first or second team was Trojans middle linebacker Hayes Pullard. You can bet, however, that the NFL knows all about Mr. Pullard.

More Arkansas State: A-State, who will play Toledo from the Mid-America Conference in the GoDaddy Bowl, has won 25 of its last 31 Sun Belt games and has 35 victories over the last four seasons to rank among the top 25 teams in the nation in total wins over that span.

Equal rights: The Trojans had as many All-Pac-12 first-team selections as the CFP semifinal-bound Oregon Ducks, who will play Florida State in the Rose Bowl. Hmmm.

No pity: While I feel sympathy for the players from TCU and Baylor, the Big 12 deserved to be shut out of the CFP for not having a conference championship game.

The crowd count: There was a message regarding the announced attendance for Friday night’s Pac-12 Championship Game in Santa Clara. That announced attendance was 45,618, which means there were some 22,882 empty seats, and that doesn’t make a good impression on national television. I never liked the idea of playing the game at Levi’s Stadium in Santa Clara. I still think that Las Vegas would make a great location if available.

Attention Pac-12 Commissioner Larry Scott: It says here that the Pac-12 football title should be played at Sam Boyd Stadium in Las Vegas, which seats 40,000. That would be 5,618-less seats than were in attendance at Levi’s Stadium. At least at Sam Boyd the game would be a sellout, and there would be little problem convincing fans to come to Las Vegas on short notice.  The final word – Part 1: The good news for the Pac-12 is that Oregon will be part of the Final Four in the first year of the College Football Playoff.

The final word – Part 2: The bad news is the waste of time and potentially seasons between keeping the “playoff” at four teams when you, me, and the rest of the college football universe knows that an eight-team playoff makes all the sense in the world. Just ask bridesmaids Baylor and TCU about an eight-team playoff.