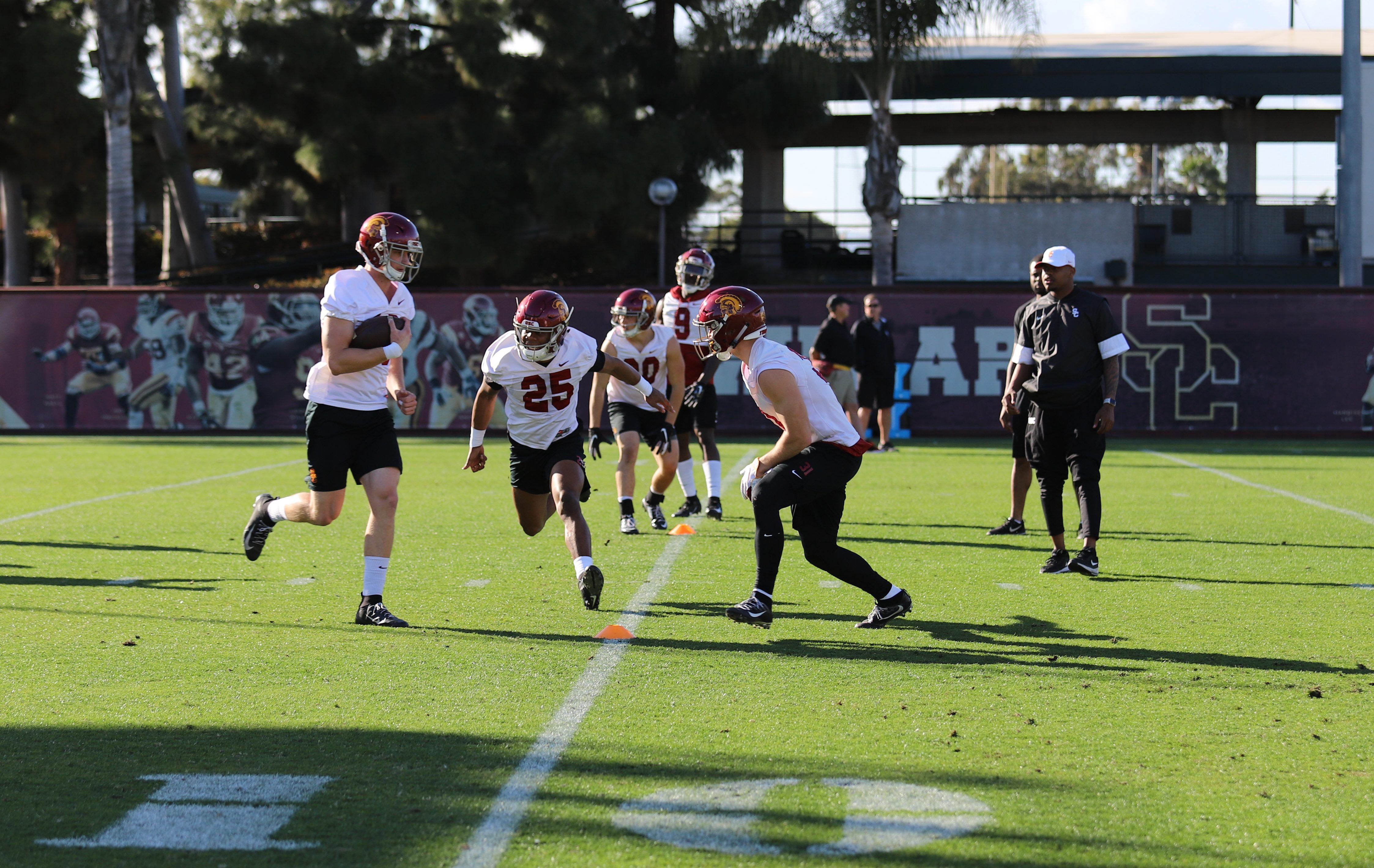 Talk the talk, Walk the walk: From all accounts, the first week of the Trojans’ spring ball was a success. Everything and everybody were upbeat, there were some new wrinkles provided by the head coach, his assistants, and some of the new structure and philosophy brought optimism. For even his most ardent critics, the “new” Clay Helton presented three practices that gave a glimpse that things are being done differently. After next week’s academic spring break, the remaining 12 practices should be even more revealing if not fascinating.

The fine print: However, keep this in mind: No matter what’s being said early in spring ball by both coaches and players and the media as well, it’ll gets down to the regular season results. If you’ve seen enough spring practices, hope always springs eternal, and there’s always a “rational and correctable” reason for why a team loses games the previous season. Sometimes it’s true and sometimes its revisionist history. However, given the tumult and circumstances leading up to USC’s spring practice, the positive first week of spring activities was all that anybody could ask for, and it was a welcome respite from controversy and the naysayers.

Quote of the Week: It was only the completion of the first week of spring practice, but Clay Helton certainly threw down the gauntlet when he told his first media scrum on Tuesday, “I think we’re as talented as anybody that we’ll play next year or at least equivalent if not better.” Well, the coach said it, and now he owns it, which is fine, and his honesty is to be admired. Helton is actually in agreement with both the media and the Trojans’ fan base that the talent is there, so now it’s the time for everybody in the program to build the foundation to prove it.

That depth chart: Give Clay Helton credit for having a depth chart every Friday to increase the competition, but not including the quarterbacks takes away from some of the team depth chart legitimacy. In the spring, it makes sense because the next day (Saturday) is usually scrimmage time, so it can motivate the troops. Friday’s before in-season game day is another matter.

To stay or not to stay: The buzz that wide receiver Velus Jones may not be gone and transfer to another university is cause for hope. There seems to be a family situation that goes beyond playing time and coaching analysis. Give Velus some room and perhaps the Trojans will get a gift from the Transfer Portal gods. With the return of DB Greg Johnson from the Transfer Portal, it gives the much-needed depth in a lack-of-depth corner situation and stops some of the transfer bleeding.

The penalty box: No question that Clay Helton has had enough of the lack of discipline conversation brought on by the overwhelming number of untimely penalties in 2018. The coach says that if a player commits a penalty, he’s coming out of the game. Well, it all sounds good, but what happens when one of the infamous Pac-12 officials calls a suspect penalty? Yes, there may be exceptions to the rule, but at least Helton is trying to do something about the amount of flags thrown in a game and he deserves credit. Now will his players buy into the new Clay Helton?

Enough already: Understandably,Clay Helton says he is done talking about the 2018 season. However, 2018 will be resurrected in a couple of months when the avalanche of college football magazines hit the stands, and you can bet there will be plenty of 2018 conversation and some of it won’t be pretty. It goes with the 5-7 territory.

The big switch: In case you weren’t aware, with former middle linebacker Cameron Smith now working hard to position himself for the upcoming NFL draft, a big change is that Smith’s apparent successor is senior John Houston Sr. who is the new Mike linebacker after holding down the fort at Will linebacker. The big question about Houston in the past was his weight (225 lbs.) and the opposition running right at him. You can bet that Houston will be tested early and often. When Cameron Smith was out with his injury last season, John filled in, so he does have a taste of the position and its challenges. Houston will also have the responsibility to make the defensive calls and adjustments and that is a big responsibility in itself.

New rules: Clay Helton has a new policy in interacting with the media. Helton will only speak after Saturday practices during spring ball. We kind of like the rule because Saturday’s are scrimmage days, and if the head coach is only going to speak once a week during spring, it’s best to hear his post-scrimmage evaluation. Of course, Helton will be evaluating the scrimmage without the aid of having seen the film, which is critical. One major negative of speaking on Saturday is that a whole week will have gone by without addressing what he saw on film from the previous week.

The glory years: It’s also safe to say that the first week of spring practice is just the beginning, but the fact that former Trojan stars QB Mark Sanchez and DB Terrell Thomas were in attendance takes on added importance. Both Mark and Terrell represent part of the achievements of the Pete Carroll era, and the current USC players are well aware that they are expected to return the Trojans the elite. Even new DB coach Greg Burns has told his position players about the Carroll’s “glory years” when Greg was Pete’s DB coach for a couple of seasons. This time of history lesson is well worth the investment in time.

Remembering GP: It was a touching and appreciated gesture by Clay Helton to mention late WeAreSC publisher before going into a summary of the first day of practice. Say what you want about Gentleman Clay’s coaching and leadership acumen, but the man doesn’t lack for compassion and empathy. Helton called GP a “great Trojan.” And nobody will debate that tribute.

The card section: No, we’re not talking about the old tradition of card stunts of yesteryear. We’re talking about the buzz that there didn’t appear to be those plethora of offensive play cards being held up on the sidelines between plays. Maybe it’s too early not to have the cards being flashed from the sidelines, but this could be one of the major implementations of new offensive coordinator Graham Harrell.

Run, run, run, run: That’s how many run plays that Graham Harrell said this week the Trojans will run at this point. Four. Yep, four. The new OC said to O-line coach Tim Drevno to just be “great” at those four plays. Trojans’ legendary coach John McKay had only a handful of running plays, although they were blocked differently at the point-of-attack. Student body sweep, blast, power, and an occasional counter of some kind. Of course, the Silver Fox also had some of the best offensive linemen in college football history.

Top of the mark: Another interesting offensive practice change was that OC Graham Harrell spent time on top of Dedeaux Field calling the shots. The big question will be whether Harrell will be in the press box for games during the season or is that a rhetorical question?

Simple is better: According to Trojans wide receiver Amon-Ra St. Brown, the actual play call from the sideline has been streamlined. For example, three words instead of seven for a play call, and that is different from the recent past. As they say in politics and sports, “Keep it simple, stupid.”

Unfounded rumor: One of the bright spots on the first day of practice was the appearance of Christian Rector who early was said to be headed for the Transfer Portal. To emphasize that his presence that he is still in cardinal and gold, Rector replied on the first day, “I am still here, baby. Let’s go!” Now there’s a positive, and, hopefully, there will be many more along the way.

The recruiting measuring stick: You can always take the pulse of the Trojans’ football program by the number of legacies that appear to be no-brainers. One case in point is tight end Jack Yary, son of legendary offensive tackle Ron Yary who blocked for Heisman Trophy tailback O.J. Simpson during the 1967 national championship season. In normal times, Jack Yary, who is a legit bigtime prospect, would be picking out his Trojan number. However, it is said that young Jack is waiting to see what direction the alma mater of his dad is heading. A Class of 2020 prospect, to lose a Jack Yary would not be good.

The comparison: Yep, eyes were raised this week when first-year defensive line coach Chad Kauha’aha’a said the current Trojans’ talent reminds him of the great Utah D-lines he coached, headed by All-World D-lineman Star Lotulelei. If true, that would really be a welcomed improvement and another good reason for optimism.

On the radar: As it has been reported, former Trojans’ wide receiver great and broadcast analyst John “JJ” Jackson is recovering from a serious stroke. However, nothing could help JJ’s recovery and motivate him any better than knowing that his freshman wide receiver son, John Jackson lll, who could be one of the really bright and surprising stories of spring ball.

Whole again – almost: Don’t look now – or maybe you should look – as those hideous looking portable “sponsor suites” in the peristyle end are officially gone. You can see the entire historic peristyle end again and what a beautiful sight. It’s been awhile. Check out the Coliseum visual progress below.

The last word: While WeAreSC and this column is predominately directed towards football, our heart goes out to former Trojans and Major League Baseball pitching legend Tom Seaver who has been diagnosed with dementia. Tom Terrific was truly one of the sport’s greatest ever.