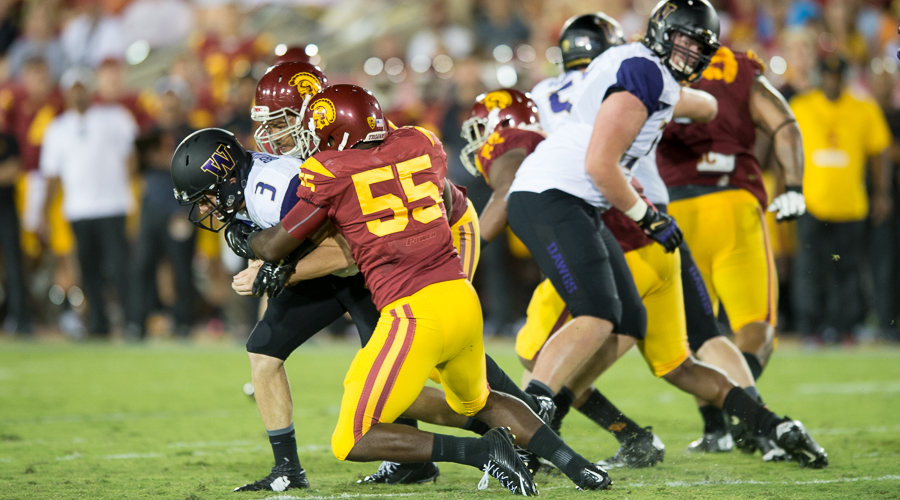 Numbers game: The big rumor – neither confirmed or denied – is the possibility that inside linebacker Cameron Smith, a 2015 Freshman All-American, may be switching from No. 35 to No. 55, a defensive number that has been worn by some of Troy’s greatest players.

The rush game: Because of recruiting purposes, it seems Trojans head coaches in the past have been way too eager to hand over No. 55 to sign a prospect before a player has earned the right to wear the cherished number.

A sense of urgency: For one reason or another, the USC football career of defensive end Jabari Ruffin hasn’t quite lived up to the hype he received coming out of Downey High. Either through the misfortune of injury or lack of discipline, Ruffin is getting one last opportunity to fulfill the expectations. With Clancy Pendergast now in charge of the defense, Ruffin has been reunited with his former defensive coordinator, who will give him every opportunity to be productive.

Behind the scenes: There might not be a more unassuming competition than at tight end where senior Taylor McNamara and promising sophomore Tyler Petite are having at it. However, if you want a heartwarming story, it has to be senior Cyrus Hobbi, who entered Troy as a center, left the team, returned last season as a tight end, and will finish his USC career with his head held up high.

The waiting game: As much as will be learned during the final next four weeks of spring ball, there is a major component missing in players that aren’t participating, or have you already forgotten the likes of corner/wide receiver/kick returner Adoree’ Jackson, center Toa Lobendahn, and safety Chris Hawkins.

Times are a’changin: If first-year veteran offensive line coach Neil Callaway doesn’t see what he wants, it won’t surprise me if the offensive line has a new alignment.

The scrutiny: Watch very carefully how the Trojans offensive mentors decide on how best to use the talents of running backs Dominic Davis and Aca’Cedric Ware.

The hidden gem: It doesn’t figure that he will see much action, but junior walk-on James Toland lV could start or contribute strongly at a number of D-1 universities and that includes some Pac-12 teams.

The thank you: A Clay Helton email was sent to Trojans football season ticket holders last week and in part it read, “In 2016, our football team will be relentless in our pursuit of excellence in all aspects of life. We will strive to be the most innovative and comprehensive player development program in college football, and we will accomplish this through technique, toughness, discipline, togetherness, and trust. Our culture is one of winning, academics, compliance and respect. My staff and I, and our team, look forward to making you proud in 2016 and beyond.”

The end game: Much attention is being paid to the Trojans first 4 games of Alabama, Utah State, and then road visits to Stanford, and at Utah. But those last 4 games are no walk in the park when you look at Oregon, at Washington, at UCLA, and closing out the regular season hosting Notre Dame. No excuses for losses, but Trojans fans may have to cut Clay Helton and his team some slack upon final judgment. I can’t remember a new USC coach being handed such a lethal schedule.

Disappointing: What other word could you use when you heard about former Trojans All-America safety Taylor Mays being suspended the first 4 games of next season for violating NFL policy. Mays is still looking for his NFL groove and the recent developments don’t bode well for the future.

The helmets: It is invigorating that the Trojans “metallic” helmets could be a thing of the past. Halleluiah!

The name game: Despite the business as usual when it comes to players names on the back of jerseys, the Trojans continue to be devoid of that individual attention getter, and it brings back the old coach’s saying “It’s about ‘we’ and not ‘me.’”

In memory: On Saturday night, I attended the last the Sports Arena event – Bruce Springsteen and the E Street Band. There had been so much talk about what to do with the Sports Arena. Some said turn it into a parking structure to help with Trojans home game football parking. Instead, the Sports Arena will be demolished and replaced by a new pro soccer stadium and franchise.

In memory – Part 2: Sitting in the nosebleed section of the Sports Arena on Saturday night watching “The Boss” – who reminded the electrified sellout this was the last event of the Sports Arena, a venue he and the E Street Band had played over 30 times – brought back warm memories of Trojans basketball in the early 60s under head coach Forrest Twogood. I had flashbacks of my youth and the likes of John Rudometkin, Chris Appel, Ken Stanley, Verne Ashby, Neil Edwards, Gordon Martin, Wells Sloninger, and Pete Hillman.

In memory – Part 3: Saturday night with Springsteen also reminded me of seeing the old “L.A. Classic” basketball tournament and watching such future NBA stars as Ohio State’s Jerry Lucas and John Havilcek and Iowa’s Don Nelson. And, of course, the Los Angeles Lakers and Elgin Baylor, Jerry West, Frank Selvy, and Rudy LaRusso. Oh those games against the green of the Boston Celtics with Bill Russell, Bob Cousy, Tommy Heinsohn, and “Jungle Jim” Loscutoff, and Sam Jones. Wonderful memories, now about to be gone with a “wrecking ball,” a song played on Saturday night by Springsteen.

Spirit of Troy: Tickets are now on-sale for the Spirit of Troy’s spring concert, “Legends of Pop,” on April 17 at 3:00pm in Bovard Auditorium. The multimedia extravaganza will feature music from some of America’s most popular artists of the past century – John Philip Sousa to Barbra Streisand to Billy Joel.

Spirit of Troy – Part 2: The concert will be dedicated to Tony Fox, who is retiring after 45 years with the Trojan Marching Band. Everyone is invited to a post-concert reception honoring his retirement at Traditions in the Tutor Campus Center. Tickets will be $50 and can be purchased at uscband.com/tickets.

New rules for 2016: There will be a number of new rules for the 2016 football seasons. One implementation will be that Coaches may use video images, photographs or computers in the press box and the locker room, but not on the sideline.

New rules for 2016 – Part 3: Sliding Ball Carrier: Defenseless Player– A ball carrier who obviously gives himself up and goes into a feet-first slide is included in the list of defenseless players.

New rules for 2016 Part 4: Blocking Below the Waist– Offensive players who are outside the tackle box at the snap, and those who leave the tackle box after the snap, may only block an opponent below the waist if the force of the initial contact is directly at the opponent’s front. However, they may not block an opponent below the waist in a direction toward the original position of the ball unless the ball carrier has clearly crossed the line of scrimmage.

The last word: In order to help with the “Instant replay review,” there will be an experimental rule in 2016 in which conferences may use a collaborative process for instant replay. This means that personnel in a separate secure location identified by the conference will assist the Instant Replay Official at the stadium in making decisions. A committee will follow this experiment during the 2016 season, and next year the committee will take up the question of making it a permanent rules change.