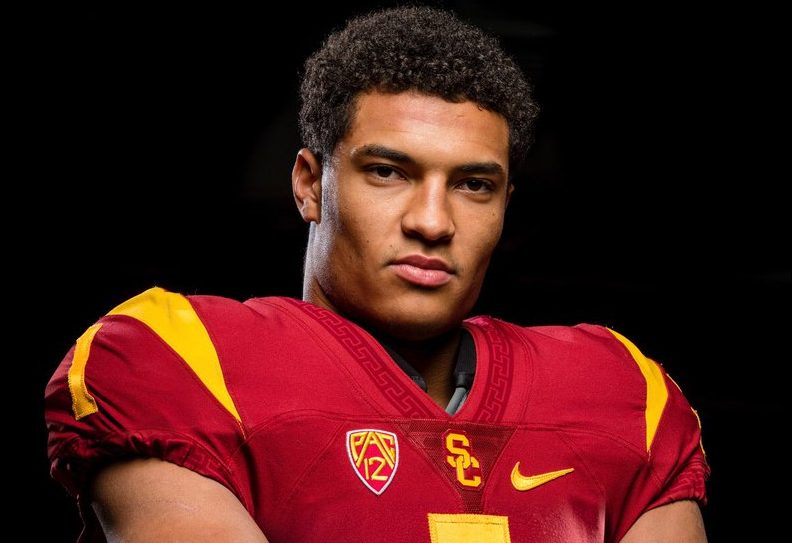 Welcome back: Raise your hand if you’ve ever made a decision that you wish could be a do- over? Well, let’s be honest, we can all raise our hands on that one. For former Santa Ana (Calif.) Mater Dei superstar athlete Bru McCoy (6-2, 205), the last six months must have felt already like an entire college career and then some. You all know his story. Graduate Mater Dei early, early USC spring enrollee who attended classes for three weeks, his trying to make sense of the Kliff Kingsberry to Graham Harrell saga, entering the NCAA Transfer Portal, heading down to Texas and saying good-bye to his Trojans and former MD teammates like QB JT Daniels and WR Amon-Ra St. Brown, participating in Longhorns classes and spring ball, getting some downtime when football isn’t on his main plate but living in Austin is, coming face-to-face with his inner self, and finally making another dramatic decision to reenter the NCAA Transfer Portal again, and the final decision to come back home and once again be a USC Trojan football player. Whew, what an odyssey, but a happy end of the beginning for everybody but the Texas Longhorns. On Tuesday, the USC Athletic Department officially announced that Bru McCoy has returned.

Life is life: With Bru McCoy finally making official on Tuesday afternoon what everybody anticipated, all Trojan fans should welcome back McCoy, the 2018 Maxwell Football Club Offensive National High School Player of the Year, with open arms because the kid knew that a return to USC would make unwanted national headlines, putting his name up for controversial media scrutiny, and probably having to sit out in 2019. In the end, however, Bru and his family rose above the “consequences” of making such a decision, and the kid went with his soul-searching heart. Sometimes you have to get away to figure things out. Yes, the grass isn’t always greener or should we say burnt orange on the other side of the hill. At the time of his Friday announcement some weeks ago that he was entering the NCAA Portal for a second time, Bru gave no doubt to his final destination by saying he would have to regain the trust of his former school and teammate. Gee, wonder who that could have been?

Second chances: So now not only is Bru McCoy officially getting a second chance of living out his original dream of being a Trojan football player and graduating with a USC degree, but Clay Helton, too, is getting a second chance to make sure something like this doesn’t happen again. Both McCoy and Helton probably have learned a lot from this happy-to-sad-to-happy ending…one would hope. Credit to Helton for never burning the bridge between Bru and himself with the USC program. This is one time that the Gentleman Clay persona worked in his favor, and the coach should be applauded on his marvelous handling of the initial fallout.

The unknown: It’s no secret that part of Bru McCoy’s original decision to leave the Trojans was his dissatisfaction, concern, and overall questioning of the uncertainty of Clay Helton’s USC program. Those concerns are on Helton and his program, and it’s also intertwined with the wait-and-see attitude of the future recruiting classes of 2020 and 2021. Having McCoy’s return certainly doesn’t hurt bringing back some respectability. BTW and in hindsight, where were the USC assistant coaches and the head man making sure that Bru was being pampered and coddled upon his original three-week introduction to Troy so things didn’t evolve into a roadmap to Austin? Let’s be honest, it wasn’t McCoy’s fault for the current state of USC football’s uncertainty and public perception of a Trojans’ program and administration trying to figure itself out.

Win-win: Bru McCoy returning to Troy is a win-win situation for everybody but Texas. Of course, the No. 1 win is that Bru is happy and comfortable in his return to a comfort zone that is his cardinal and gold “hood.” Win No. 2 is if Clay Helton doesn’t last during or past this season, McCoy, who will again probably have to sit out a year, is young enough in the program that unless the Trojans’ athletic administration falls completely on their collective faces or are unwilling to pay out the big bucks, a new USC head football coach could be special – are you thinking along the lines of an Urban Meyer or Bob Stoops? For Bru and his family, the thought of Meyer or Stoops coming to Troy after this season must certainly have crossed their minds. Ironically, it’s possible that McCoy will never play for Helton. If a coaching change does come to fruition, the only ones that can “F-up” the next USC head football coach selection will be the USC athletic administration, and who knows if current athletic director Lynn Swann will even be around should such a decision be at hand. Hopefully, new USC president Carol Folt will be as creative and as informed when she signed off at the University of North Carolina for the return of Hall of Fame coach and former Tar Heel Mack Brown.

The message sent: What Bru McCoy’s recruiting, enrollment, transfer, and transfer return saga should be is a classic example for high school football recruits to really take their time when making a college decision. Honestly, we think the early enrollment signing period in December does a lot of harm if not well thought out. Think about it: What happens if “my position coach leaves after I sign?” “What happens if the head coach is fired after I’ve signed?” “What happens if I don’t like it after going through spring practice or have discomfort with the school in general?” “Am I really ready to see if the aforementioned grass is greener on the other side of the hill?” So many questions, and we’re sure that Bru McCoy will be a helpful authority or mentor for other recruits questioning their choice.

The Portal: If Bru McCoy isn’t the poster boy for the NCAA Transfer Portal being just another rule to make life more difficult than solving a problem, we don’t know what is. IMHO, the NCAA Portal Transfer system does have a lot of good to it and provides players with another opportunity to play college ball and perhaps showcase their skills to professional scouts. However, the “Portal” also has opened a current can of transfer worms that can do more harm than good if not regulated properly. We have mentioned here a number of times that the NCAA has to make some adjustments to this rising transfer chaos soon. You don’t think others in McCoy’s situation won’t attempt the same scenario? The good news is that the NCAA apparently realizes it.

Original thoughts: When Bru McCoy decided to transfer from USC to Texas, he told USA Today, “(I’m) looking forward to everything that is in front of me, kind of leaving what’s behind me where it is. What’s in my control is in my control, what’s not is not.”

Famous last words: Prior to his leaving for Texas, Bru McCoy told USA Today, “Texas, with the track they’re on with Coach (Tom) Herman being there, and his system, their receiving coach there, Coach (Drew) Mehringer, he’s the best.”

The media perspective: The hope here is that the national and local media will put things into proper prospective and focus on what Bru McCoy’s transfer return means in the long run to the state of health of college football. No doubt it will be interesting to hear from Bru down the road regarding his thoughts and the process to returning home.

The after effect: Bru McCoy’s return after a semester at Texas will certainly catch the eye of local and national recruits. What Bru says in the future will be taken word-for-word by those in the current recruiting process. However, it’s not so much what McCoy says for public consumption, it’s what he says to active USC recruits away from the media that will give future recruits additional insight into his decision.

The head coach: Obviously, the return of Bru McCoy probably makes Clay Helton privately and publicly smile from ear to ear. It’s going to be interesting how Helton uses this early holiday gift to his recruiting advantage. It will also be interesting to see how Texas handles McCoy’s departure. Because Texas has a footprint in SoCal, they’ll probably be very diplomatic and put their best face forward not to sever any current local recruiting inroads.

Unchanged opinion: Even though Bru McCoy will no doubt make an outstanding wide receiver at the college level, it still says here that he might be better suited for the NFL as an outside linebacker. No, we’re not being critical of Bru, but it is an opinion that is shared by other informed media and recruiting types.

Texas two-step: The Texas coaching staff and program didn’t take the Bru McCoy transfer-back talk lightly, with UT head coach Tom Herman, quarterback Sam Ehlinger, receivers coach Drew Mehringer and Kevin Washington, director of player development coming to California this past week to try and convince Bru that Texas was still the best place for him. Obviously, McCoy and his family thought otherwise but were polite enough to listen.

Never mentioned: In the official 2019 University of Texas spring roster, it is never mentioned in Bru McCoy’s official biography that he first attended USC before enrolling in January at Texas.

The last word: So now we wait to see how Bru McCoy’s return to Troy affects both the Trojans current roster and the down the road recruiting. One thing is for sure, the return of Bru McCoy is a good thing, but the final effects may not be known for quite some time… especially if he must sit out a year.