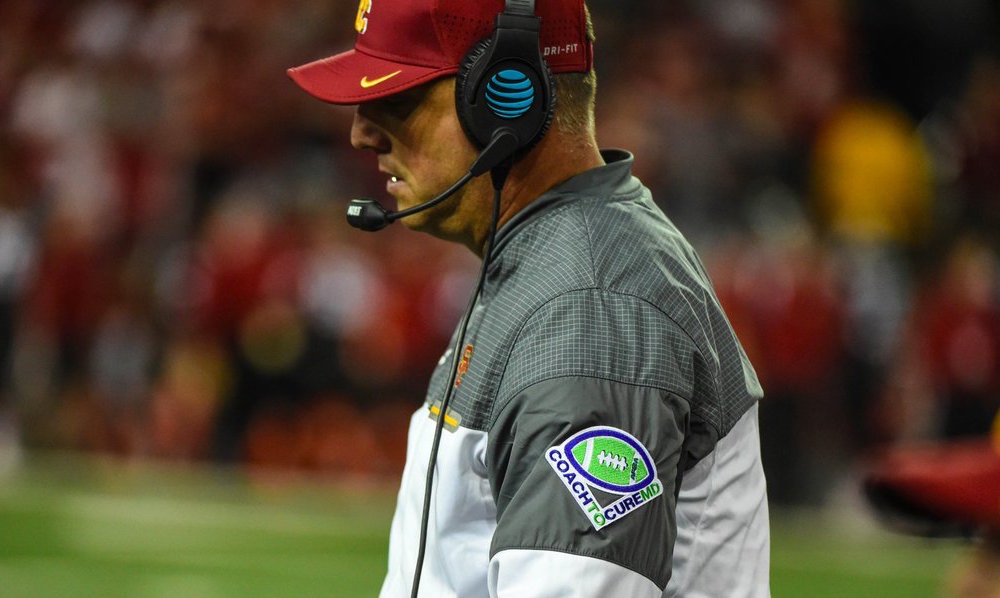 IMHO evaluation: This time, there would be no comeback. This time, there would be no late lightening in a bottle. This time, Captain Comeback couldn’t come back. This time it was No. 16 Washington State (5-0, 2-0 Pac-12) that had the winning drive late in the final quarter, the dagger a 35-yard field goal by Eric Powell with 1:40 to play as Washington State absolutely earned the 30-27 upset victory over the No. 5 Trojans (4-1, 2-1 Pac-12) on Friday night in whacko Martin Stadium. And no excuses either, Trojans fans, but not having three of your starting five offensive linemen not in there would certainly qualify as a legit justification. Truth be told, the Trojans were outplayed, outfought, and outcoached on both sides of the ball (total yardage 462 – 327). Indicative of the night, Trojans’ superstar quarterback Sam Darnold fumbled on the Trojans’ last desperate series to insure the WSU victory. The reality, Washington State took full advantage of USC’s offensive and defensive liabilities, and dominated most of the meaningful statistics, although the Men of Troy did have more penalty yardage than the Cougars (80-59). Certainly, Trojans’ head coach Clay Helton (photo above) is doing his own reflections over the loss.

Another perception turned reality is that there have been ominous warning signs before Washington State regarding the state of Clay Helton’s team, but you wanted to ignore the obvious because of the previous four Trojans’ victories. Winning can camouflage and/or deflect a lot of deficiencies. One of those deficiencies has been the Trojans’ secondary, which has been called for numerous pass interference penalties during the season. The unit, couldn’t contain the Cougars standout senior quarterback Luke Falk, who made the Trojans pay dearly for interference flags that allowed Cougar drives to be prolonged when the WSU should have been punting. With the exception of the Stanford game, the Trojans offensive line has not been that physically dominant, and you know that when the Cardinal and Gold can’t impose their will on the opponent’s defense either by physical deficiencies or by the selection of plays within the 5-yard line.

Speaking of play calling, the Trojans’ offensive play calling was downright eyebrow raising at times, even knowing the Trojans were missing both of their starting offensive tackles and eventually a starting guard. As evidence, late in the second quarter after WSU’s Falk (34-of-51 for 340 yards, 2 TDs, 1 int.) was intercepted at his own 3-yard line by a spectacular play Trojans’ OLB Uchenna Nwosu, the Trojans offense couldn’t punch it in – again. Why the Trojans didn’t run the same Sam Darnold touchdown keeper that worked in the first quarter and would eventually work late in the final quarter was puzzling. After Nwosu’s interception, who among you didn’t think the Trojans were about to jump out to a 21-10 lead, which would have put extreme pressure on the WSU offense? The goal line series defined both game and the two teams. Of course, who thought the Trojans would be trying to attempt a 2-yard at the opposite sideline in the fateful series  to true freshman tight end Josh Falu, which almost ended up a Cougars’ 100-yard pick-six? The Cardinal and Gold had to be satisfied with a 20-yard field goal by Chase McGrath. As Darnold was pressured all through the game, you had to be thinking: Where were the screens and draws or tight end crossing patterns? Or counter plays for that matter? Sure, the Trojans needed maximum protection at times, but all the time? Not to pile on, but where was freshman tailback Stephen Carr (0 receptions) in pass routes or more carries for the explosive Ronald Jones, who had just 14 rushes?

IMHO offensively speaking: By his own admittance, this was one of quarterback Sam Darnold’s worst games as a Trojans (15-of-29 passing for 164 yards, 0 TD passes, and an interception). Clearly, Sam has felt the weight of a badly banged up offensive line, inexperienced receivers, and the pressure of being a Heisman Trophy frontrunner. Realistically for now, Darnold no longer should be considered a frontrunner for college football’s most prestigious award – and maybe that’s a good thing. He’s still just a redshirt sophomore, and he needs to call a personal timeout and clear his head. Jettison some of the expectations. Darnold has publically told the media even before last night’s kickoff that the weight of the season and expectations for and by him have been wearing him down. Admire Same for telling it like it is. It also wouldn’t be a reach to say that the Trojans have put too much emphasis on Sam Darnold “making a play” rather than figuring out an offensive identity. It worked last season, but this is a new season.  An identity would be when you’re inside the opponent’s 3-yard line, you power it in, run-pass option, or at least roll out. However, despite the loss and second-guessing, there were some bright spots like tailback Ronald Jones 86-yard scoring burst in the second quarter, the receiving plays by redshirt freshman Tyler Vaughns, who had six receptions for 89 yards, and the field goal conversions by Chase McGrath.

IMHO defensively speaking: Aside from the killer pass interference penalties, the Trojans’ front seven gave a valiant defensive effort before tiring, especially DL Rasheem Green, who had to leave because of an undisclosed injury late in the game. While the Trojans did keep Luke Falk from even doing bigger damage than he might have, one could only wistfully ponder how much damage outside linebacker Porter Gustin might have inflicted on Luke Falk’s body had Porter been able to play. The Trojans also paid a price by being conservative on defensive substitutions until backed into an injury corner. The Trojans’ defensive front had a heck of time trying to handle WSU’s All-America offensive guard Cody O’Connell (6-9, 370).

IMHO special teams speaking: No question, the bright spots were the field goal kicking of Chase McGrath and the pinpoint punting of Reid Budrovich. Both are deserving of a scholarship at this point, especially McGrath, who connected on two more field goals (20 and 29 yds.), and continues to be a bright spot thus far in the season. There were, however, some head-scratching penalties on special teams that didn’t help the cause.

IMHO -The bottom line: While the loss hurts, Trojans head coach Clay Helton is correct when he told his team after the game that the same championship goals before the season are still in play. For now, the Trojans have to be considered an outsider as it pertains to the College Football Playoff. However, a Pac-12 South Division title is still very much in play along with a Pac-12 Championship. There’s still a lot to play for, so let’s wait and see what this team looks like when everybody is healthy and how this team improves. Think 2016. However, the Trojans now have a Pac-12 loss and can ill-afford another.

Tackling the issues: Safety Marvell Tell and nickel back Ajene Harris led the Trojans in tackles with eight stops, respectably.

Trojans head coach Clay Helton comments: “I am not going to use excuses. We believe in moving the ball, and we just didn’t get it done tonight on third down. I thought that was going to be the most critical area of the entire game, especially against a high-powered offense like Washington State. We went 2 for 11(on third downs) and that led to 81 total plays for their offense against our defense. They went 8 of 18 (on third downs) and had a huge third-and-3 on their last drive and got a big run that set up the winning field goal. It was a very close game and credit to Washington State, I thought they played wonderfully. It was a great atmosphere and we came up one play short. They made one more play than us. Our kids played their tails off. I thought both squads played hard.”

WSU head coach Mike Leach comments: “I was proud of the way we prepared. We had a good week preparation wise. One thing I am especially proud of this team is we have made a big point is to be good on all three sides of the ball. We were and I thought all three sides complimented each other. I think it’s important that we have the ability to do that, especially against a team like USC. We felt we should have had more points in the first half. We squandered some opportunities to get points and we gave them seven.”

Tyler talks: Reflecting on the loss, USC redshirt freshman wide receiver Tyler Vaughns said, “We knew we couldn’t start off late but we started off late. It hurts and I am emotional right now. We’ll move forward and look at the film and get back at it next week.”

The captain comments: Afterward, Trojans co-captain and junior inside linebacker Cameron Smith said, “They’re a great team and we lost the game, but we’ll take tonight and take how it feels (the loss) and get sick of this feeling and get ready for Oregon State. We had some good times (tonight), but something they (the WSU offense) do best is dink and dunk and Falk is a great quarterback. They played us well. I think we prepared well, but I think we could have stopped their running backs a little bit more.”

Sam says: Following the loss, Trojans quarterback Sam Darnold said, “’We knew what they were going to run, it was just a matter of executing it. ‘They made more plays than we did.”

The hits keep on coming: I can’t remember a season when the Trojans had so many injuries to critical positions, coupled with a season that has no bye week(s).

MIA: One missing player that would help Sam Darnold and the offense would be the return of tight end Daniel Imatorbhebhe, who is scheduled to return for the Notre Dame game on Oct. 21.

The prognosticator: In a quick preview of Friday night’s game, the Spokane Spokesman-review wrote, “Will Washington State’s soft schedule come back to bite the Cougars, or will Sam Darnold’s interceptions finally haunt the Trojans?” FYI, the Spokesman Review picked Washington State 38-34.

The temp: Temperature at kickoff was 64 degrees.

The last word: On to Oregon State. Need we say more?