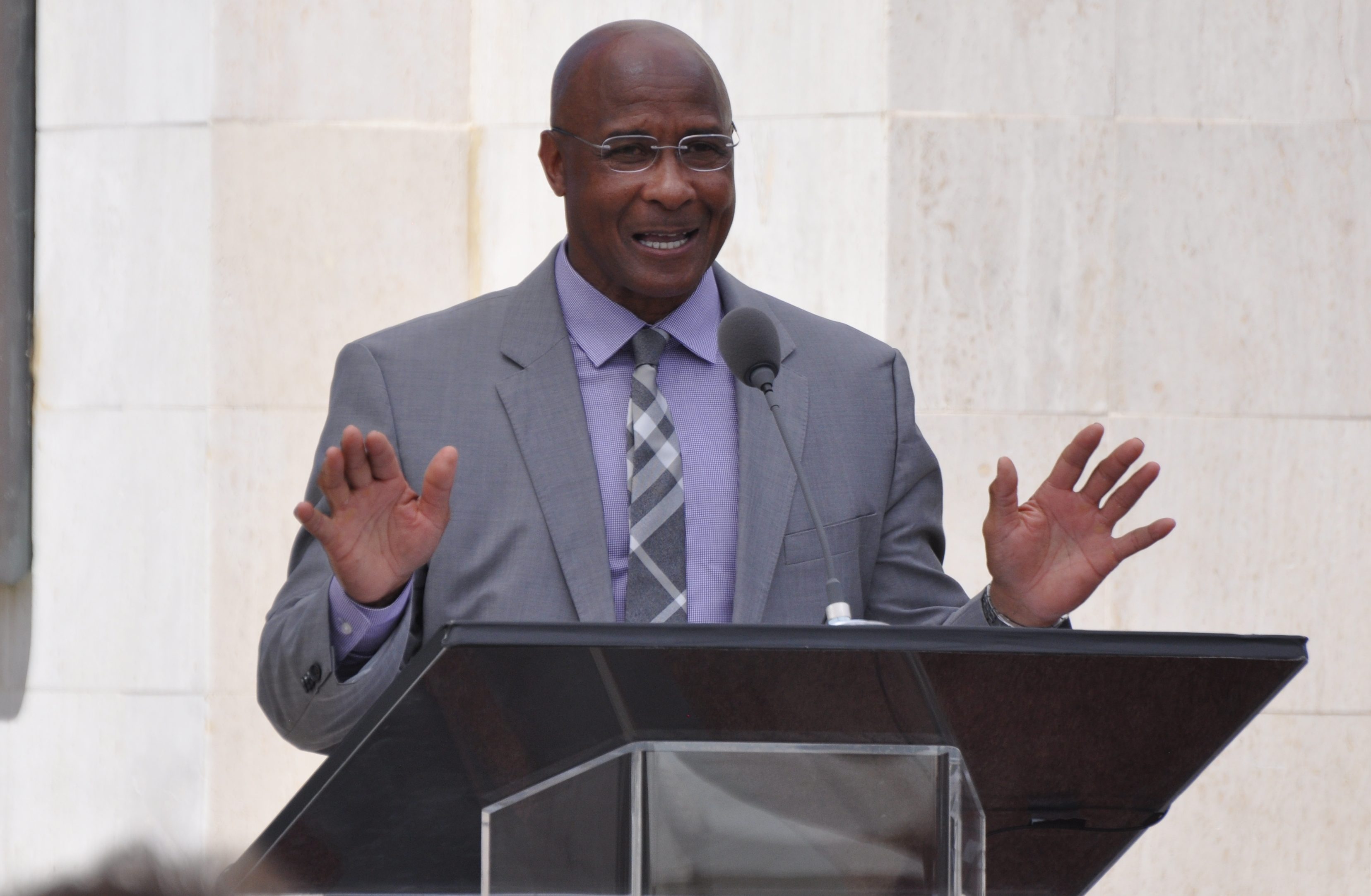 It wasn’t the lightning bolt announcement on Monday afternoon that sent shockwaves all throughout the University of Southern California and its massive national following, it was the sudden timing of Lynn Swann’s resignation, effective immediately as proclaimed in a released letter on university stationary from new USC President Carol Folt.

So why did Swann turn in his resignation letter apparently so stunningly after he had mentioned on previous occasions that he wasn’t going anywhere in the foreseeable future? No, something must have triggered this unforeseen chain of events. That something might have been his seeing the writing on the cardinal and gold wall that his days as AD were numbered. That something might have also been a bunch of somethings, which may have had to do with the admissions scandal as much as anything in the pecking order. No way would a prideful man like Lynn Swann just clean out his locker and go back on the golf course. No way. It’s not in his DNA.

IMHO, one way or another, Lynn Swann had to go. It was that bad both inside the department and among the Trojans’ fan base. He was a great wide receiver for the Cardinal and Gold, but he was a near disaster as an athletic director. He wasn’t a unifier but a disruptor. It was about me and not we. The lessons of “team” didn’t seem to apply for him as an athletic director. By his actions and by what he said, it was about his own image. How sad.

Dr. Folt told the Los Angeles Times, “He (Swann) felt that this was the professional thing to do, to resign and allow me to build my team. That really is the gist of it.” In terms of the admissions scandal that stunned USC, Folt said it “was not a part of the decision for me.”

Obviously, President Folt was not surprised or caught off-guard by Swann’s announcement. In her obligatory praise of the former Trojans’ All-America wide receiver, Folt wrote, “I am writing to share my sincere appreciation for Lynn Swann, who has decided to resign from his position as the Director of Athletics effective today. Lynn has been a leader on and off the field at USC for nearly five decades, and he will forever be a valued member of the Trojan family.”

What was a telling sign in Folt’s letter is that she had already named an interim athletic director in Dave Roberts, listed as a special advisor to the President and who is currently the vice chair of the NCAA committee on infractions. Roberts also served as the vice president for athletics compliance at USC from 2010 to 2016, which meant navigating USC through the NCAA draconian sanctions.

What is curious is that USC Senior Associate Athletic Director Steve Lopes, second in command behind Swann, was not inserted as the interim AD. You can read between the lines. It remains to be seen if this decision by Folt has anything to do with the admissions scandal that implicated the athletic department or the FBI investigation.

There was always a question whether incoming USC President Folt fully understood the dark clouds of perceived incompetence, painful morale issues, and apparent corruption that invested the storied Trojans’ athletic department. Now we know, Dr. Folt gets it and probably has known it for a while, choosing to stay lowkey and taking her time in acquiring information and knowledge of the players both in and outside of the athletic department.

What we do know is that Dr. Folt previously comes from the University of North Carolina that had its issues with the NCAA, and that she successfully navigated the Tar Heels to a positive outcome. The new Prez is no wallflower when it comes to sensitive matters of a high-profile athletic department.

It’s no secret that the football program under Clay Helton has been a major source of – to put it mildly – intense controversy since the end of the 2018 season. Speculation on Helton’s future has been manifesting itself ever since Lynn Swann – against the wishes of a vast majority of the Trojan followers and media – supported Helton after last season’s 5-7 record and no bowl game. The heat on Helton remains just below a furnace meltdown level, although Saturday’s Stanford victory and the jaw dropping debut of true freshman quarterback Kedon Slovis did take it down a notch and served as a temporary distraction.

Despite the Stanford win, Dr. Folt is aware of the possibility that if Helton’s team were to go off the rails for a long period of time, changes would be intensely demanded. Unfortunately for Helton, the coach was given no refuge in the early part of the 2019 schedule, having to play Fresno State, Stanford, at BYU, Utah, at Washington, and at Notre Dame. Considering the background of the 2018 season, the 2019 season has set up Helton as potentially a gridiron dead man walking.

Currently the Trojans are 2-0 on the football season and are ranked No.24 in the nation. This certainly helps Helton’s cause to continue the season as the USC head coach. However, as mentioned, with upcoming games at BYU, No. 11 Utah, at No.23 Washington, and at No. 7 Notre Dame, the euphoria to a good start can change like summer Florida weather.

With Swann no longer around to protect Helton’s future, it would be safe to say that given the continuing circumstances, Gentleman Clay is walking on top of a cardinal and gold spider web. The best advice would be: Win, baby, win. Would winning be just enough at this point for Helton to be retained by a new athletic director? Winning the Pac-12 Conference would help after last season’s debacle, but you know how a new athletic director likes to name their own coaches. You would think if Helton’s team can win the Pac-12 title, he would be safe even with a new AD.

If Helton was to be fired during or after this season, there’s no way that Dr. Folt would have retained Lynn Swann long enough for Swannie to choose the next USC football coach. It wouldn’t be a reach to believe she would want the new athletic director to name the new football coach. Even if a new AD is not in place during this football season, that doesn’t mean she wouldn’t have a say if Helton proceeded to take a nosedive in the difficult upcoming stretch of games or balance of the season. Folt has now proven to the cardinal and gold masses that she isn’t afraid to make a tough decision once she has gathered enough information. And don’t dismiss that Dr. Folt isn’t aware of the current issues within the USC men’s basketball program and its potential NCAA fallout. That’s another festering athletic department challenge.

With the Swann resignation, the appointment of a temporary athletic director, and the formation of a search committee, Dr. Folt knows – if needed – that she can now make future decisions within the football program. She also knows the normal process of hiring a football coach, having signed, as one of her last acts as the Chancellor of North Carolina College, Hall of Fame coach Mack Brown to again lead the Tar Heels football program. For the record, UNC is currently 2-0 on the season with Brown at the helm, having beaten rival South Carolina and the Miami Hurricanes. And in terms of basketball, Dr. Folt has been the ultimate leader of a legendary basketball program, which has been under the guidance of legendary coach Roy Williams. She knows excellence and the passion from her Tar Heels experience in hoops.

So, where does the Trojans’ search committee turn to find AD candidates?

We can assume from her aforementioned statement she’s not looking for another former Trojan legend like Pat Haden or Lynn Swann to fill the position. Both contributed to the current state of athletic malfunction, and it isn’t even debatable. IMHO, I really don’t care if the new AD is brought in from the outside or from the inside, as long as that person, male or female, is the best qualified person for the position. As a side note, if a new football coach is needed to be hired, just hire the best!

Naturally, the first rumored potential candidate for the new athletic director’s position figures to be Dr. Folt’s previous North Carolina athletic director, Bubba Cunningham. The fact that she has worked with him and apparently respects his opinions shouldn’t be overlooked. Whether Cunningham will be the choice is premature. That doesn’t mean, however, she wouldn’t get input or candidate background from Bubba.

Another intriguing candidate could be current University of Alabama athletic director Greg Byrne, who previously was the AD at the University of Arizona. Might Byrne want to return to the West Coast? He certainly would have a keen Pac-12 understanding and USC in particular. FYI, Byrne has his BA from Arizona State and grew up in Oregon. That would classify him as a West Coast and respected Pac-12 guy.

Or how about current Northwestern athletic director Jim Philips? He has done an outstanding job and look how the Wildcats football team has performed under head coach Pat Fitzgerald. Although not a West Coaster, Philips is well respected from what he’s accomplished in a tough academic institution and in an elite conference. Of course, you’d have to dismiss the fact that he once worked in the Notre Dame Athletic Department.

So, there you have it. No question who is now in charge of the University of Southern California – both academically and athletically – Dr. Carol Folt. It will be interesting to follow the progress or evolution of the “new” athletic department. All eyes will be watching.

It’s a new beginning, which should be exciting those big boosters that had all but given up on the storied athletic department. Some have felt they have been thrown under the bus in spite of their generous financial contribution in the past. These folks need to be reintroduced to the University they once had so much passion and zeal. They need to be brought back on board.