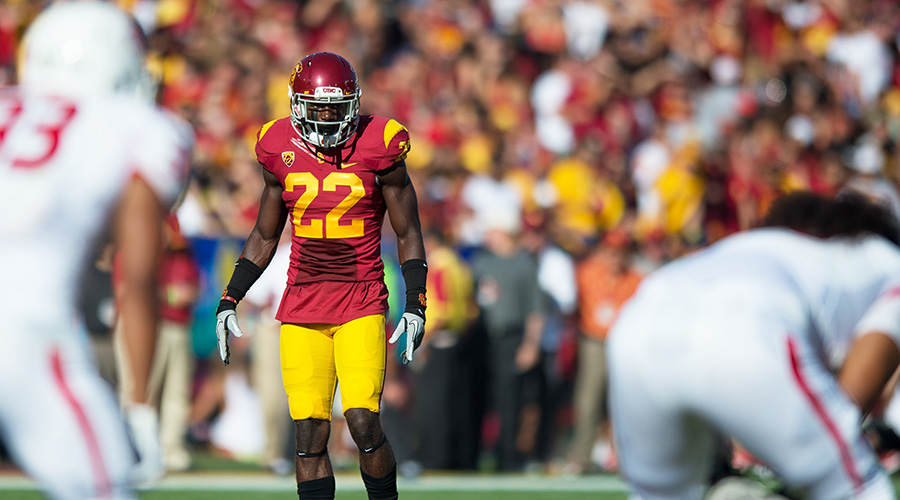 The revelation: Maybe it’s much ado about nothing or much ado about something, but in Sunday’s sports edition of the Los Angeles Times, lead columnist Bill Plaschke interviewed former Trojans interim head coach Ed Orgeron in Louisiana, and the beloved and former legendary defensive line coach said he would now be receptive to returning to Troy in a coaching capacity.

The “O” quote: “I will be a USC Trojan forever, and, I don’t know what they’re thinking, but the door to come back there is always open in my mind. If the right situation comes up this year and they ask me to go back, I’d be more than happy to listen.”

Confirmation and the soul: In Plaschke’s interview with Orgeron, the former Trojans coach admitted that he had been offered a coaching position under Steve Sarkisian and said, “Pat Haden was gracious and kind and generous to me, Sark is a friend who made me an outstanding offer, everyone there has been nothing but classy and professional with me, but it just hurt too bad to suddenly not be their head coach. Maybe me staying for the bowl game, being positive, that could have helped me in the long run, but I was heartbroken and I couldn’t fake it.”

The question: Is it possible that a return of Ed Orgeron is a real possibility? Sarkisian wasn’t afraid to make defensive coaching moves when he was at the University of Washington and even dismissed former Trojans assistant Nick Holt from his inner circle. Sark has defended strongly his current DC Justin Wilcox to the max when questioned, so who knows?

Question No. 2: Why would Orgeron make such public statements about having an open mind to return to Troy? Does he know something that the rest of us don’t know and how will Sarkisian and Pat Haden react publically and privately to Sunday’s revelations?

Question No. 3: Will the timing of the Orgeron admission create uneasiness in the John McKay Center and what kind of an effect will it have if any on the current coaching staff? Don’t shoot the messenger, Orgeron said it and it deserves publication and conversation.

The final question: What would it say about Steve Sarkisian if he did hire Ed Orgeron in the future?

The perspective: After Arizona State’s major 55-31spanking of Notre Dame in sizzling Tempe on Saturday, it begs the question of how good is ASU or how overrated were the Irish? Perhaps a bigger question arises and that is how good are the Trojans if not for a Hail Mary by ASU over the Men of Troy? Then again, UCLA demolished ASU 62-27 in Tempe in September. Confused? We’ll find out shortly some answers when the Trojans play both UCLA and Notre Dame.

The perspective – Part 2: Before Trojans fans gloat too openly over ASU’s victory over the Irish, who made enough mistakes on Saturday against ASU for an entire season, the Men of Troy have some experience playing in the heat of Tempe and how Sun Devils Stadium can be mean, cruel, and heartless. It says here the Irish team that shows up in the Coliseum on Nov. 29 will be ready to play if only for the reason of knowing that ASU was extremely fortunate to have beaten the Trojans.

The perspective – Part 3: Okay, it says here that up to this point the Trojans have underachieved and pick your own reason, ASU has overachieved thanks to some Lady Luck and very good coaching, and Notre Dame was overrated and so is Florida State for that matter.

The perspective – Part 4: Watching how things are shaping up in November, there’s a legitimate argument that the College Football Playoff and powerbrokers erred badly in making it a four-team tournament instead of an eight-team tournament. There are too many good teams that could argue they belong in the final four.

Ducking the Utes: Well, is there any doubt at this point of the season that Oregon is the class of the Pac-12 after the Duckies and quarterback Marcus Mariota displayed a gutsy victory over Utah, 51-27 in Salt Lake City?

No-brainer: Barring a complete collapse or political chicanery, Oregon’s Marcus Mariota will be bringing the Heisman Trophy back to Eugene and well deserved.

Time saver: Kudos to USC for refining and addressing the public information in regards to Thursday night’s game in DTLA against Cal. If it weren’t for an evening kickoff, I’d say go with Amtrak and/or Metro Link.

The return: At the level he is playing after being switched from safety to linebacker, Trojans fans should be rejoicing in unison with the great news on Saturday that Su’a Cravens looks on track to play against Cal on Thursday night.

Hmmmm: It will be very interesting to see what the personnel grouping is by offensive line coach Tim Drevno when the Trojans line up against Cal.

On the Mark: If former Trojans quarterback Mark Sanchez is able to keep the Philadelphia Eagles in victory lane, Philly head coach Chip Kelly will have a pleasant quarterback controversy when former starter Nick Foles returns.

Off the Mark: If you think that Mark Sanchez isn’t good enough to start in the NFL and point to the New York Jets experience, I can give you two words that helped him fail in that chaotic situation in the Big Apple: Rex Ryan. Ryan gives every indication is that all he cares about is defense, which doesn’t exactly ooze for a friendly quarterback environment.

Programing reminder: You can catch Mark Sanchez on Monday Night Football on ESPN (5:30 p.m. PST) when the Eagles host the Carolina Panthers.

No-brainer: Anybody who would discourage junior All-America defensive tackle Leonard Williams from heading off to the NFL after this season should also volunteer to pay him what his monthly NFL salary would be for the next ten years.

The final word: So what excuse are you going to use in not telling the boss you’re really going to the Trojans game for Thursday night’s 6 p.m. kickoff?

The final word – Part 2: Okay, so what excuse are you going to use when you take off Friday after getting home late from Thursday night’s game?