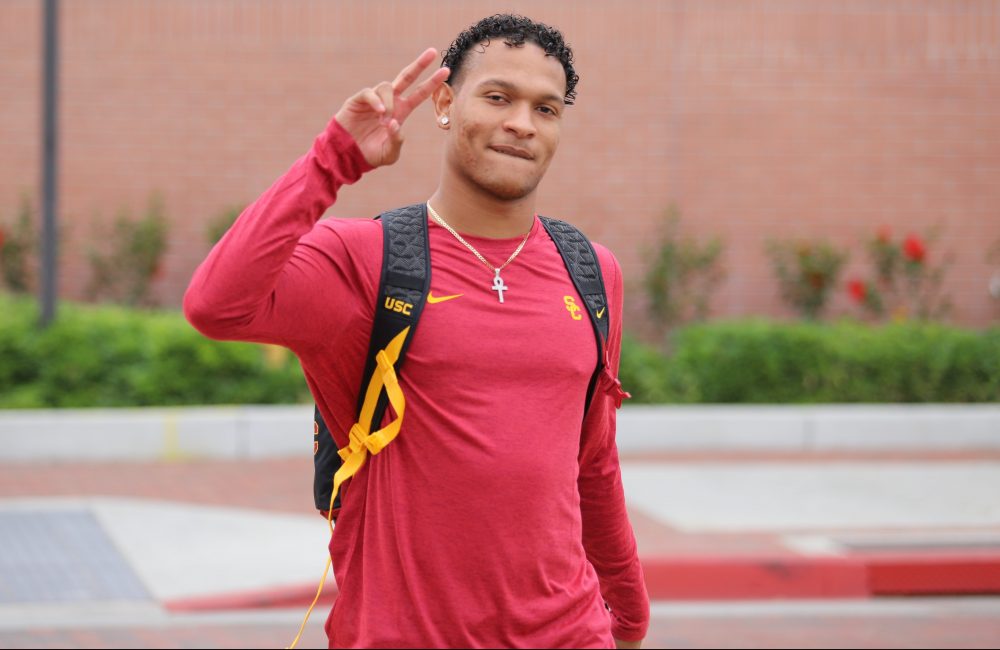 Most people would have no problem saying that USC cornerback Chris Steele turned in a very good true freshman season in 2019, as he started six times, played in 12 games, and recorded 35 tackles, five pass deflections and a fumble recovery. Most people would say that, but Chris Steele is not most people.

“I didn’t have the season I wanted to have,” Steele said of his freshman campaign. “That definitely humbled me.”

Steele’s path to this point in his college career has been anything but straightforward. He enrolled early at Florida last year, participated in spring ball with the Gators, then transferred to USC during the offseason. In less than two calendar years, he’s been at two colleges and had four different position coaches–two at Florida and two at USC. And now he, like every other Trojan, has had his preparation for this season thrown into disarray by the coronavirus pandemic. But Steele is confident that last year’s struggles will pave the way for this year’s successes.

Steele said he realizes now that last year, after he left Florida, he didn’t put in the work that he needed to do in order to have the year that he wanted on the field. He did some lifting and some footwork drills, but said he wasn’t doing what he was supposed to be doing. This offseason has been different for everybody, but Steele has made sure it was different for him in the right way.

“After last season, I told myself I was going to make sure this offseason that I put 110% effort into everything I do,” he said. “I have very high expectations for myself, so I’m really working hard during all of this.”

Steele spent the early portion of this offseason working on his speed and strength–he said he’s added 10 to 12 pounds–but that he had a realization after a month or so following the cancelation of spring ball.

“For me, that was realizing that I could be as strong and as fast as I want, but if my technique was bad when I got back, I wasn’t going to play,” Steele said. “So I started hitting guys up to do one-on-ones, because I think that’s the biggest thing you need. That’s the opportunity for me to go get better and perfect my craft.”

This offseason is unlike anything we’ve seen in the unknown it brings to the 2020 season. Student-athletes aren’t typically used to having to find their own time or motivation to work out at home when things are so structured for them on campus. Steele said he could see how finding the motivation to push every day as hard as possible could be difficult when there were so many unanswered questions about what was going on, and wondering if there would even be a season. Difficult for others, that is, but not for him.

Steele has all the motivation he needs at this point, as he’s found a calm amidst all the chaos of his early college career. A one-time USC commitment during the recruiting process, Steele’s full-circle path back to the Trojans has had a big effect on his entire outlook, as a Southern California native.

“Coming back home took a lot of weight off my back,” Steele said. “It was a big stress reliever. Coming back to USC, being around familiar faces–it sparked something in me.”

Steele said the familiarity he had with everything USC–the traditions, the rivalries, the times he sat in the Coliseum watching games–all flooded back in a way that was different than when he was at Florida.

One familiar face at USC is cornerbacks coach Donte Williams, who recruited Steele hard to Oregon when he was an assistant coach for the Ducks. Williams missed on Steele as a high school prospect, then couldn’t land him as a transfer from Florida. But the two are now united at USC.

Steele said he’s appreciated the time he was able to spend with all three previous position coaches he’s had, and was especially grateful for former USC secondary coach Greg Burns, who taught Steele the intricacies of breaking down film and sat down with him to dissect his game and the areas where he needed to work.

“It’s all been a blessing in disguise,” he said of arriving now with Williams. “I was able to take in all that information from different coaches, and the more tools you have in the toolbox, the better.”

Steele has been very impressed with Williams early on, and that feeling extends to the entire defensive staff.

“I’m very confident in this defensive staff,” Steele said. “Coach [Todd] Orlando is very aggressive and he takes advantage of the types of players he has, and the new scheme is allowing guys to play how they play.”

Steele said that’s especially true of him, as the defense allows him to be physical with receivers at the line. He added that he’s now learning both the Boundary and Field positions, as he’ll be ready to play on either side in this defense.

“This new defense is going to be insane,” Steele said. “The scheme we have going on now is a lot different than last year.”

In looking at Orlando’s defense at Texas last year, the number that stands out is the 292.5 passing yards allowed per game–a number that ranked the Longhorns 127th in the country. If USC’s defense is going to improve from last year, clearly it can’t accept those numbers making the trip with Orlando and safeties coach Craig Naivar from Austin to Los Angeles.

The secondary didn’t have a chance to work together during spring ball, which was a big blow to its ability to mesh cornerbacks and safeties figuring out their communications and what this defense asks them to do on the field. Steele said he’s spent time this off-season working with some of the USC defensive backs who live locally, including Chase Williams, Greg Johnson and Max Williams. Cornerback is a position group that was extremely young last season and is still young in 2020, as there are still no seniors in the room.

“Out of all the positions on the team, I’d say the corners have the best relationship with each other,” Steele said. “But there’s a different feeling at USC, where everybody really cares about each other. Like with OG (Olaijah Griffin), I started opposite him last year and me and him hang out after practice every day. At the end of the day, all of that stuff helps, when you’re close with the dudes you battle with every day. Since we’re so tight off the field, I want to make sure that during the game, I’m locking up my side of the field for them. We all have love for each other–we hang out on weekends, we’re all talking during quarantine. Our relationship in our room is amazing.”

That group is scheduled to get a major first test this season, as Alabama looms large on the schedule. Coaches and players talk constantly about not making any one game bigger than it is, but there’s no getting around looking ahead to the Crimson Tide. Steele said it hasn’t been difficult to use Alabama as motivation.

“My dad always taught me since I was a little kid that opponents have no name, no face,” Steele said. “You can’t care about the name on the front or the back of the jersey, but it’s really hard here. You have to be realistic at the same time. It definitely helps when you’re going against a historic team like Alabama. It’s definitely something that’s kept me motivated.”

In addition to the on-field work Steele has put in this offseason, he’s also embraced Burns’ teachings with film study. Several Alabama wide receivers got together this summer to work with Ro Simon, the trainer for the Fast Houston 7-on-7 team (home of USC 2021 commitments Brandon Campbell and Quay Davis) and someone with whom Steele is acquainted. With even that little bit of extra information available, Steele pounced.

“I love it,” Steele said with a laugh. “I screen recorded every single rep of their workouts and sent it to our DB chat.”

While locking down a group of wide receivers that includes likely first-round picks DeVonta Smith and Jaylen Waddle won’t simply happen from watching a few clips from a summer workout, Steele knows that everything matters. He’s always been a big film guy, so this played right into him. He said the USC defensive backs can gain an understanding of how the Alabama receivers come off the ball and what an eventual slant or fade route looks like coming in their release coming off the line.

With his size, strength and versatility, Steele is one of the Trojans who could have a lot to say about USC’s success on the field in 2020, and he’s ready to make a real impact.